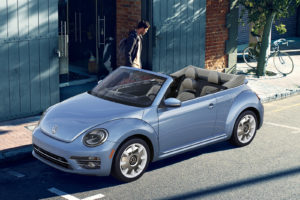 Volkswagen announced Thursday it would call it quits on the Beetle in 2019 after decades of the iconic car.

“The loss of the Beetle after three generations, over nearly seven decades, will evoke a host of emotions from the Beetle’s many devoted fans,” Volkswagen Group of America CEO Hinrich Woebcken said in a statement. “As we move to being a full-line, family-focused automaker in the U.S. and ramp up our electrification strategy with the MEB platform, there are no immediate plans to replace it. But as we have seen with the I.D. BUZZ—which is the modern and practical interpretation of the legendary Bus—I would also say, ‘Never say never.’ We’re excited to kick off a year of celebrating one of the true icons of the automotive world, with a series of events that will culminate in the end of production in Puebla in July 2019.”

The closing model year will feature SE and SEL Final Edition versions, offered both as a coupe and convertible.

Volkswagen squashed the original Love Bug in 2003 with an “Última Edición” model in Mexico, which according to the History Channel had since 1988 been the last country to sell the classic Beetle.

The last 2003 Mexican Beetles could be purchased in just beige or light blue, according to Volkswagen. The Final Edition Beetles will be sold in “Safari Uni,” inspired by the New Beetle’s “Harvest Moon Beige,” and “Stonewashed Blue,” a color reminiscent of the 1970 “Jeans Bug” available on the 2016 Beetle Denim.

Chrome trim will come standard, just like the 2003 Última Edicións, and both Final Editions offer what had been Beetle Convertible standard items like body-color side mirrors and heated windshield washer nozzles. They’ll also trade the “Turbo” badge for a “Beetle” badge.

The Final Edition SE will have 17-inch aluminum wheels with 15 spokes, and the SEL will evoke the chrome hubcaps and whitewall tires of the Última Edición with 18-inch disc wheels. Other trims will be sold as well.

The SE will have blind-spot monitoring and rear-traffic autobraking standard, and the SEL comes standard with parking alerts, which sound if you’re too close to someone in the front or rear.

The final generation of the Beetle started with the 2012 model. It offered “a very rigid body structure that uses ultra-high-strength, hot-formed steels in the crash-load paths and seamless laser welds.” It also included an Intelligent Crash Response System which cuts the fuel pump, activates the hazards and unlocked the doors. After March 2013, Volkswagen beefed up structural and airbag crash protection, according to the Insurance Institute for Highway Safety.

The final generation of the Beetle Convertible launched with the 2013 edition. Volkswagen upped the rigidity over the coupe to compensate for the absence of the roof, introducing stronger steels and reinforcements.

“Due to the targeted use of materials and laser welding of selected parts, the body stiffness was increased by 20 percent over that of the New Beetle Convertible,” Volkswagen wrote.

According to Volkswagen, the following differences can be found on the 2013 Beetle Convertible:

• The A-pillar’s interior bar is 0.5 mm thicker and made from ultra-high-strength hot-formed steel instead of cold-formed metal. There is also a reinforcement in the “bend area”

• The front roof crossmember has an additional central plate

The convertible also has two rollover bars controlled by the airbag computer and activated “within milliseconds” of a crash being detected.

It’s unclear if Volkswagen made any Beetle Convertible structural or airbag changes between the 2013 model and today. (In any case, you’re going to want to get your true structural repair information for both the coupe and convertible from the actual OEM procedures.)

Featured images: Volkswagen announced Thursday it would call it quits on the Beetle in 2019 after decades of the iconic car. (Provided by Volkswagen)