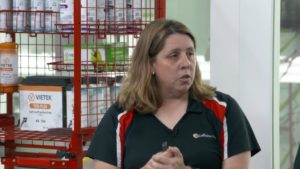 Only a few items are effectively captured in an estimating system’s basic refinishing times, which could result in shops and staff doing a lot of work uncompensated if an estimator fails to manually add it, collision experts said last fall.

Prep work to get even an OEM panel to a state where this process could begin might involve numerous other not-included operations — little 0.1s (or more) that add up for the shop and technician, according to the show.

All four types of categories of panels examined by the show — new OEM (metal and plastic), aftermarket, recycled and repaired — only included the same few few items in refinish times, according to the show.

This leaves many, many steps left uncounted even on a new OEM part (the basis for anything in the estimating systems), the show demonstrated.

A new OEM metal part could require at least 14 not-included operations once it’s removed from the box, inspected and cleared for paint, according to the show.

Removing stickers: Felder said she had seen some parts with several stickers, joking it begged the question of if the supplier wrapped the part in labels to ship it.

She said she enjoyed the videos on YouTube of stickers being removed using fire, but shops attempting that kind of thing should first check the category of metal to which the labels are attached. Higher-strength steels and aluminum are heat-sensitive.

Co-host Larry Montanez of P&L Consultants said he hated to see the “sloppiness” of cars still bearing the stickers from repaired parts, even if the labels aren’t necessarily a hazard.

Solvent testing matters because while paint might stick to a particular substance, it couldn’t be guaranteed that substance would stick to the substrate, Montanez said.

“That’s where the problem comes in,” Montanez said, and why a paint manufacturer wouldn’t guarantee such work.

Felder said one of the requirements for warranty recertification is a solvent test. Which isn’t included, Olson said.

Color lookup: It’s not included, Felder said. She noted that even a shop with a color spectrum reader costing “a lot of money” might wish to recoup that investment with time on the estimate.

Mix and match sprayout: Mitchell and CCC don’t include a single color mix and match and sprayout, while Audatex does within its time, according to Montanez. However, all three say it’s between 0.1-1.0 hour in variance, with an average of 0.5 hours, he said.

Three variances could be 1.5 hours to nail the color, he said. He recommended painters having difficulty ask a woman in the shop to offer a second opinion. “More than likely, she’s not colorblind,” he said.

Tinting to match color, underside and interior color: Montanez said that matching interior backside colors or factory e-coat colors can be difficult, as can obtaining the correct overspray look.

He also warned shops to be careful with the exterior color and contact a paint company representative if difficulties arise. Randomly adding color to make the paint “look right” instead of performing calculations will be a “nightmare” for the painter in a redo situation or for another shop down the road.

Back of panel: A new fender, for example, would still need epoxy for corrosion protection, Olson said.

“Etch” primer: While scuffing is included in the refinish time, cutting through an area by mistake would require a substance like etch primer to be applied in a not-included operation, Felder said.

Montanez noted that the show was using a “general term” — the paint manufacturer might want an etch primer, or they might want a wash primer or epoxy. The same might happen if a repairer sanded through body filler by mistake; they might have to reprime.

He recommended having a paint manufactuer hold a one-day training course discussing such issues to prevent “very, very costly” problems after refinishing.

Blow off tack: Montanez recommended that shops who did use a tack rag open it up completely, fan it, and then bunch it up to use it. While the rag couldn’t be used again in the paint department, he recommended hanging on to it for use by body technicians.

Antichip primer application: Montanez said some vehicles have it on window openings, and he estimated almost every hood uses it on the first 15-20 inches. Mirrors and quarter panels might also have the substance.

Corrosion protection: Felder said a shop must decide who will handle it, though Olson pointed out that you can’t apply cavity wax before refinishing: for a painter “will shoot you.”

Masking: Masking up to 36 inches and using a car cover would be included, but anything else would be additional time, Montanez said. It’s never included for priming, however, he said.

Olson said estimators have to understand the repair process.

Merely taking a mint OEM hood out of the box and refinishing it before replacing it — no blending — might produce a refinishing time for the R&R, Felder said. But then “another good 12 lines” might follow it capturing all the not-included operations, she said.

It’s never just a matter of clicking “replace part,” and allowing the system to calculate a time, Felder said. Which is what many shops do, Olson said.

A plastic part could mean some of the not-included operations associated with a metal part, but also other plastic-specific manual-entry operations, according to the show:

Mold repair cleanup: This refers to the mold used to form the part, Montanez said. It’s removing or shaving down leftover bits of material, he said.

Felder said this must be done before painting — having the painter sent a refinished part back to the body department to remove this residue was a mistake.

Montanez explained that fresh paint usually takes a couple of days before it’s fully cured, and attempting to clean up the mold residue too soon after painting could lead to the paint coming off too. He recommended doing it at the point of a technician trial fitting the part, when the residue would be visible.

Adhesion promoter: Neither the labor nor material would be included, and a material calculator would miss this, Felder said.

Flex: This drew a big debate a while ago, Felder noted. It’s not included.

Film thickness: Olson noted that it wasn’t on the show’s chart, but checking bumper cover film thickness could be important given advanced driver assistance systems.

Welded OEM panels add extra steps too, and Felder said she thought that was where shops lost a lot of time and money.

Adjacent panels: A welded panel adds a great deal of additional area that might need to be prepped for refinish, Felder said. Replacing a quarter panel might potentially add 22 other panels which need to be prepped, she said. If that took just 0.1 a piece, “that’s a lot of money,” she said.

Full refinish: Any panel you affected with the welding process has shifted from a blend panel to a “full refinish panel,” Felder said.

“We’re not blending anything,” she said. It’s the full refinishing time, she said.

Estimators needed to think of refinishing operations whenever a welded component is required.

Olson said it wasn’t a situation where shops weren’t doing these steps. The work was being performed, it just wasn’t appearing on the estimate, he said.

Montanez said he didn’t care if a shop charged for work or not as long as they did it, but observed that a facility couldn’t continue a “zero-sum game” very long before the company went out of business.

P-pages from the three estimating services seem to bear out the show’s point that little is included.

“Because 95% of all refinish operations in the United States are performed using a two-stage process, Audatex defaults to two-stage refinish for all vehicles. This applies to both exterior and interior surfaces. The user may change these options to reflect the appropriate repair process. Audatex’s single-stage refinish times provide a consistent, reliable, and accurate base upon which to calculate time for the two-stage process.”

The estimating service’s formula is “Set-up time of 0.6 hours with the selection of the first refinished panel, plus 20% of Audatex estimate refinish labor.”

“Refinish times do not include time which may be required to match color tints or defective finish textures on interior or exterior surfaces. Refinish times do not include disassembly of components such as Mirrors, Grilles and Headlamps that may come serviced as an assembly. Nor do they include time which may be required to correct finish imperfections caused by improper weather conditions, application, or environmental contamination such as dust, dirt, grease, etc. MOTOR advises all parties consider these factors beforehand to determine mutually acceptable provisions in the event such conditions exist or occur.”

Mitchell: Mitchell opens the refinish section of its P-pages by noting “Refinish times in this Guide pertain to NEW, UNDAMAGED PARTS and are not intended for calculating complete vehicle refinish—single- or multi-stage. An estimate of this nature would suggest all new panels have been fitted to the vehicle.”

It defines overall included operations as:

• Prime or seal as required

Mitchell goes on to define two-stage (clear and base) refinishing as:

It also reminds estimators that “For NEW, UNDAMAGED PARTS, a total of no more than 2.5 hours should be necessary to perform the four Clear Coat Refinish Included Operations listed above. This calculation DOES NOT APPLY to bumper covers, ground effects, special package equipment, interior edges, jambs, entryways, undersides and additional time that may be required for repaired and/or used panels.” (Emphasis Mitchell’s.)

A variety of items aren’t included in the refinishing process for a new OEM metal part, according to an October 2018 “Repair University Live.” (Screenshot from Collision Hub video on YouTube)

A variety of items aren’t included in the refinishing process for a new OEM plastic part, according to an October 2018 “Repair University Live.” (Screenshot from Collision Hub video on YouTube)