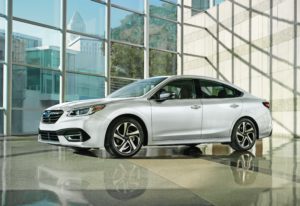 Collision repairers will encounter major changes in the structure of the next-generation 2020 Subaru Legacy compared to the 2019 model, including what the OEM said was an 13 percent increase in ultra-high-strength steel.

Subaru on Thursday said the 2020 Legacy received an “optimized” version of the OEM’s Subaru Global Platform repairers first encountered on the 2017 Impreza — including a what Subaru said was 371 percent increase in structural adhesive over the 2017 version of the platform.

This and the ultra-high-strength steel contributed to a 2020 Legacy with 100 percent more front lateral flexural and rear subframe stiffness and 70 percent torsional and front suspension rigidity over the 2019 edition.

The OEM said it also increased stiffness with its first ever application of “a floor crossmember that is filled with a highly rigid and lightweight two-part foam material” — something that repairers will definitely want to watch for.

“The Legacy’s stiffened platform pays multiple dividends in the real world,” Subaru wrote in a news release Thursday. “Along with a strengthened suspension and lowered center of gravity, the Legacy’s improved body rigidity provides more responsive steering and handling, smoother and quieter ride, and heightened hazard avoidance in emergency situations.”

Subaru said the new Legacy also shook up the construction of the unibody.

“In another Subaru first, the Legacy utilizes a full inner frame construction in which only the outer panels are welded to the structure after the entire body framework is assembled, unlike a conventional manufacturing process in which the upper and under bodies are assembled separately and then joined,” Subaru wrote. “This new inner frame construction is significantly stiffer and lighter than the previous Legacy’s conventional structure.”

On the chassis front, the 2020 Legacy’s suspension is “all-new” and “lighter, stronger and more responsive, according to Subaru.

Collision repairers will notice some other alterations to the Legacy’s design. The OEM on Thursday emphasized the work it had done to eliminate nearly 3 decibels of noise from the vehicle cabin, including significant changes to the Legacy’s glass:

Subaru engineers worked extensively to find ways to reduce unwanted noise coming into the cabin, fitting the Legacy with new door weather strips that feature a baffle in the mid-section and dual lips on the roof side for improved quietness. Even the weather strip mounting structure was modified to reduce mounting variation and improve sound insulation. Sound-insulated glass, which uses a sound-insulating inner film for the windshield and front-door glass, has been adopted, while glass thickness all around has been increased for class-leading quietness.

Subaru already warns shops not to use anything other than OEM glass on vehicles with the windshield-facing EyeSight — an ADAS suite which comes standard on the 2020 Legacy. But the sound-blocking capability and thickness of the new Legacy glass adds yet another reason why a repairer might insist on an OEM windshield.

Other body features of interest:

Aesthetics: “With larger thickness in profile panel surfaces and a thicker appearance from the raised trunk surface, which has a smooth connection to the C-pillar, the Legacy embodies solid toughness and a dynamic active image.” Also, the fenders are wider.

The Touring trim has “chrome plating decorated door handles.” The Sport trim has an exclusive rear bumper and a spoiler.

Grille: The Legacy has active grille shutters standard on at least the non-turbo Legacy editions, which means the car will probably be more complicated to fix if it smacks into something. The regular grille is frameless, and the Sport trim features a “high-gloss black bar.”

Mirrors: The side-views mirrors were redesigned for better aerodynamics and noise reduction. In an interesting little preset, Subaru reports they can also be tied to seat position memory so different drivers don’t have to waste as much time adjusting them. The top Touring trim’s mirrors have “power folding and reverse interlocked tilt-down functions” and are “satin tone plated.” The Sport trim mirrors are “high-gloss black.”

Subaru wrote that the 2020 Legacy “once again leads its segment” in safety technology. It includes the EyeSight suite, which in late 2018 included adaptive cruise control up to 90 mph, autobraking (with full stops up to 30 mph) and lane keeping.

The 2020 Legacy’s EyeSight will also add Lane Centering, which works when the adaptive cruise control is active and to adjust the car “when the vehicle veers outside its lane, helping the driver maintain a direct path,” according to Subaru.

The 2020 Subaru Legacy is shown. (Provided by Subaru)