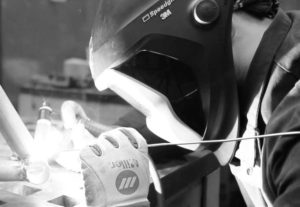 A University of California, Los Angles team has developed a means of welding 7075 alloy aluminum by infusing titanium carbide nanoparticles into welding wire.

The breakthrough in welding the alloy — something UCLA had called “almost impossible” before — could make the metal more practical for OEMs redesigning vehicles and provide the aftermarket with a new capability as well.

“The new technique is just a simple twist, but it could allow widespread use of this high-strength aluminum alloy in mass-produced products like cars or bicycles, where parts are often assembled together,” UCLA professor Xiaochun Li said in a statement. “Companies could use the same processes and equipment they already have to incorporate this super-strong aluminum alloy into their manufacturing processes, and their products could be lighter and more energy efficient, while still retaining their strength.”

Li said in an interview Monday the wire was ready for commercialization. He said that since the announcement of the method, he’s received interest daily from various companies.

“It was amazing,” he said. Ironically, he said, it’s not even his primary research area.

Li also said the process could be use to weld alloys from the 6000 series down to the 2000 family. However, he noted that 4000 and 5000 alloys were fairly easily welded already.

“The researchers already are working with a bicycle manufacturer on prototype bike frames that would use the alloy; and the new study suggests that nanoparticle-infused filler wires could also make it easier to join other hard-to-weld metals and metal alloys,” UCLA wrote in a news release.

UCLA said 7075 is “strong but light” — a third of steel’s weight but nearly equal in strength — making for greater fuel/battery efficiency, and it is used in airplane wings and fuselages. It also can be found on objects in which the metal doesn’t need to be joined.

“(W)hen the alloy is heated during welding, its molecular structure creates an uneven flow of its constituent elements — aluminum, zinc, magnesium and copper — which results in cracks along the weld,” UCLA wrote in a news release. “… (T)he alloy’s resistance to welding, specifically, to the type of welding used in automobile manufacturing, has prevented it from being widely adopted.”

The wire’s nanoparticles, measured in billionths of meters, allowed the welder to join 7075 aluminum with tensile strengths up to 392 megapascals, according to UCLA. The common 6061 automotive alloy has a 186 MPa tensile strength when welded, the college wrote.

Heat treatment after welding was found to boost the joint to 551 MPa, a tensile strength like steel, according to UCLA.

A University of California, Los Angeles team has worked out a way to weld aluminum 7075 alloy by using wire with nanoparticles. (Provided by UCLA)