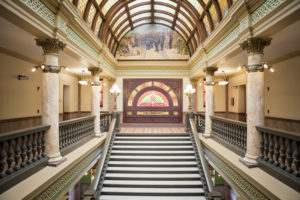 The Montana House Business and Labor Committee earlier this month tabled a bill which would have required insurers to give consumers a choice of original or aftermarket parts, with no additional cost for picking OEM.

A staffer for the House committee said Monday it was unlikely House Bill 252 would be among those revisited.

HB 252, which was heard by the committee Jan. 31 and tabled the next day, would have been placed into Montana Code regarding casualty auto insurance had it passed.

Sponsor Rep. Jacob Bachmeier, D-Havre, while introducing the bill recalled one of his friends being struck by an at-fault driver and having the body shop seek to install an aftermarket part because of the friend’s insurance policy. He said his friend knew from research the part wasn’t of the same standard as the OEM part.

“He was being ripped off,” Bachmeier said, calling it an “affront” to his friend’s investment in the vehicle.

Besides ensuring a customer could always choose OEM at no additional cost, Bachmeier’s measure would have required written consent for any aftermarket parts:

(b) An insurer may not directly or indirectly require the consumer to pay any difference in price if the consumer elects to use original equipment manufacturer parts in the repair of the vehicle.

The insurer wouldn’t have been able to use just any aftermarket parts, either. HB 252 banned a part unless it:

(a) carries sufficient permanent identification of its manufacturer, which must be positioned to be as accessible as possible after installation; and

(b) is at least equal in quality to the original equipment manufacturer part in terms of fit and performance. The cost of any modification potentially needed when making the repair is considered in determining the quality of the nonoriginal part.

Farmers Insurance lobbyist John Metropoulos brought up the language regarding modification in the bill.

Rep. Sue Vinton, R-Billings, asked if she would be charged more because of modification on an aftermarket part, and Big Sky Collision owner Matthew McDonnell said yes. A part manufactured in another country instead of Detroit wouldn’t match in qualities like mil thickness or density and would have to be tested, he said. Sometimes, the part wouldn’t fit, and the shop would have to contact the consumer, he said.

The shop would still test-fit OEM parts, but the point of that action was to look for other damage, McDonnell said. The OEM parts always fit, and no part on the market fit better, he said.

Bachmeier said at the end of the hearing had planned to amend his bill and include in the disclosure a statement that OEM parts might be discontinued for certain vehicles. This would protect repairers, he said.

Rep. Derek Harvey, D-Butte, said he liked the disclosure element of the bill. He asked Allstate lobbyist Bruce Spencer if his carrier disclosed when it wanted to use aftermarket parts or if it asked the body shop to do that. He said body shop estimates disclose aftermarket parts, or at least his personal body shop did so. He said he believed shops were disclosing part types anyway, and so the language was unnecessary.

“You really don’t need a statute to mandate something that’s already occurring,” he said.

But that presumes all Montana body shops are as transparent as Spencer’s. We couldn’t find any Montana Administrative Rules or statutes specifically requiring that body shops or insurers actually had to disclose aftermarket parts.

ARM 23.19.12, ironically, requires shops to reveal everything but aftermarket parts to a customer.

“All work done by a motor vehicle repair business, except work done under a dealer or manufacturer warranty when the customer has no monetary obligations, shall be recorded on an invoice, which shall describe all service work done and parts supplied,” the rule states. “If any used, rebuilt or reconditioned parts are supplied, then the invoice shall clearly state that fact, except such parts that have been remanufactured and carry a new part warranty. One copy shall be given to the customer and one copy shall be retained by the motor vehicle repair business for a period of at least 90 days.”

The next rule declares it illegal for a shop to “make or authorize any statement written or oral which is known, or with reasonable care should be known, to be deceptive or misleading.” If a customer presumes every part except those identified as used or remanufactured is new, then not revealing which parts are aftermarket arguably violates both the letter and spirit of that rule. But it doesn’t seem to be explicitly prohibited.

The only really relevant reference to aftermarket parts we could find in Montana statute dealt with service contracts, which must disclose if a vehicle could be fixed with them.

Bachmeier said he also planned to add that windshields be considered for OEM parts under the bill; the language as filed had defined parts as those “that generally constitute the exterior of a motor vehicle, including inner and outer panels” and specifically excluded tires, windows and windshields. He explained that change by citing a story about a Volvo owner with an aftermarket windshield whose “car seized” on the Interstate because of an ADAS error. (Volvo in a recent position statement specifically told shops to only use OEM glass.)

Proponents and opponents raised typical arguments over whether aftermarket parts held sufficient quality and the potential for insurance premiums to increase. Some interesting points came out of the discussion of those two factors, however.

Price: The state Department of Insurance agreed with opponents and predicted higher insurance premiums. It expected to have to temporarily hire people to review more than 100 rate filings by insurers.

Bachmeier said he guaranteed that as a 21-year-old, his rates were higher than anyone else in the room’s. He said he wanted to know that if he paid that much money he was receiving a part intended to perform like a manufacturer part.

Montana was 17th in the nation in auto insurance, and Wyoming was 12th — and the highest of all of Montana’s neighboring states — according to Van Horssen. Rhode Island was 4th, he said. But the argument falls a bit flat — it’s not like Wyoming and Rhode Island shot up to rank 1 and 2, after all.

In addition, Wyoming rules only took effect in July 2017. Despite expressing concern that insurance would get more expensive in the wake of those regulations, State Farm announced a more than 3 percent rate cut for Wyoming in June 2018.

“The company’s financial strength is allowing us to pass along rate savings to our Wyoming customers,” State Farm Senior Vice President Denise Hardin said in a statement then. “We continually evaluate how we can best serve our customers and are very pleased to be able to offer this rate decrease in Wyoming.”

Collision repairers should also note that State Farm’s lobbyist’s comments to the hearing supported the notion of raising rates when expenses dictate it. So remember that the next time you’re negotiating your State Farm Select Service contract or dealing with an adjuster resistant to your door rate.

“Anytime we get a raise cost for providing a service, we have to pass that through to the consumer,” Van Horssen said. “That’s just the marketplace. If it costs us more to provide the product, we raise the price of the product.”

Quality: The hearing showed a potential need for a “like kind and quality” definition. Bachmeier’s bill didn’t explain the term, and lobbyists for aftermarket parts proponents failed to articulate a consistent or clear definition.

Asked how Allstate determined which parts were acceptable and if this was done by adjusters, Allstate lobbyist Bruce Spencer said he didn’t know. State Farm lobbyist Greg Van Horssen said his insurer was “keenly aware” of the need for like kind and quality and relied on certification entities like CAPA. But not all carriers required CAPA certification, Yates Body Shop’s Zac Yates said later in the hearing.

Earlier, LKQ lobbyist Catalina Jelkh Pareja was asked to define like kind and quality, and she said the Montana deputy insurance commissioner and insurers had said “insurance agreements” tell aftermarket parts suppliers “that they should specify like kind and quality for … repair of their motor vehicles, and that’s what the price difference, it is. OEM parts are branded, and aftermarket parts sometimes are manufactured in the same facility, they just come out with branded product or aftermarket generic parts, but the kind, quality and performance and fit, its pretty much the same as equal. So they’re certified parts, and the cost difference is just between a branded product and an aftermarket product.”

The Montana Capitol is shown. (powerofforever/iStock)

The Montana Capitol is shown. (benkrut/iStock)