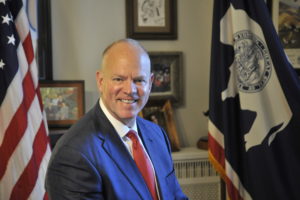 Republican Gov. Matt Mead will decide the fate of a Wyoming Department of Insurance proposal to expand parts notification and allow vehicle owners to pick OEM parts at no extra out-of-pocket charge, the DOI said.

“The Governor has until 27 July to either accept or reject the changes,” Deputy Insurance Commissioner Jeff Rude wrote in an email last week. “Some interested parties have sent letters directly to the Governor’s office regarding their position on the proposed changes.”

The DOI, led by Mead appointee Commissioner Tom Glause, proposed the change to Wyoming Administrative Rules Chapter 19 last year. The law on the books already requires non-OEM parts to be “at least equal in quality to the original part in terms of fit and performance.”

It continues, “The cost of any modifications which may become necessary when making the repair shall be considered as a factor in determining the quality of the non-OEM part.”

The customer must also consent in writing to the aftermarket parts and be told they don’t have to accept them if they don’t want them.

Glause’s agency would add this interesting wrinkle: “No insurer shall directly or indirectly require the consumer to pay any difference in price if the consumer elects to use OEM parts in the repair of the vehicle.”

(Interestingly, the existing definition seems to suggest that radiator supports and bumper beams and brackets would be off-limits.)

The DOI held a public hearing on the proposal in March.

“Our office did hold a hearing concerning the proposed changes,” Rude wrote. “Testimony was taken both for and against the changes.  After the hearing, the proposed rule was sent to the Governors office for action.”

An agency summary of comments from the hearing indicated the National Association of Mutual Insurance Companies, Property Casualty Insurers Association of America, Safelite Group and State Farm Insurance all opposed the measure.

Safelite, State Farm and the PCI all objected to the idea of making all exterior parts subject to consumer consent and notification. As the DOI wrote:

The main concern is that the Department removed the language that included “sheet metal and plastic parts” as part of the definition of “after-market part” and in the proposed regulation only defines “Part” as “the exterior of a motor vehicle, including inner and outer panels.” The companies that have submitted comments believe that this language is ambiguous and will confuse people as to what parts are covered by the regulation. They are concerned that it will lead to the interpretation that it applies to all exterior parts including tires or glass. Safelite, State Farm and PCI recommend including the language, “sheet metal or plastic parts” to the definition, excluding glass or leaving the definition the same as previously defined.

Let’s set aside the likely more controversial clause regarding customer out-of-pocket part costs to look at this element by itself. We’d argue that more transparency and customer consent as to what is being installed on their second-most-expensive possession — particularly one still under warranty — is never a bad thing. And if insurers are going to argue to OEM-supporting shops that customers already know they could get aftermarket parts because they read the fine print in their policy, then there should be no objection to a customer being informed of how this played out in the repair.

Besides, aftermarket glass at least might be a nonstarter anyway if the OEM is warning that automated safety systems might not work through aftermarket glass. A customer with certain Subaru or Toyota models, for example, certainly needs to know if a collision repairer, glass installer, or insurer is going to contradict OEM warnings on front-facing cameras. According to the DOI, the insurers argued that the proposed changes also “create a ‘de-facto’ ban on the use of Non-OEM and aftermarket parts in Wyoming.”

“If you incentivize that consumer by telling them whether you choose OEM or aftermarket, there’s no cost impact to you, why would they ever choose an aftermarket part, if it’s essentially going to be for the same price,” Colas said. “We’re telling [regulators] that you’re effectively eliminating the use of aftermarket parts if you adopt such language. So we are in a battle there in the state of Wyoming…It is a threat to our industry in that state.”

This seems to contradict the aftermarket assertion that such parts are better than OEM.

“The companies also express concern that having the language in Section 5 of the regulation regarding payment of any difference in price will result in larger losses, will place pressure on the rates and adversely impact the affordability of insurance for policyholders in the state of Wyoming with no additional benefit to the consumer,” the DOI summarized.

Insurance industry calculations suggest customers are saving about $19 a year in premiums by agreeing to aftermarket parts, using the “save consumers $1.5 billion every year” tally and Property Casualty Insurers Association of America data cited by the Quality Parts Coalition. This assumes all savings are passed on to consumers.

So there’s potentially higher rates — but not by much. As for severity, an Wyoming insurer can always total the car. Or they can just absorb the costs and keep on making money.

Based on the most current National Association of Insurance Commissioners data (2015), auto insurers only paid out about 61 cents on every dollar they took in from Wyoming residents in auto physical damages losses, with about another 10 cents going to other loss adjustment costs. They spent another 17.6 cents of a Wyoming resident’s premium on “selling expenses.” So offset the increased costs in parts by spending less on ads and agents, and voila, problem solved!

The insurers also argued that Wyoming shouldn’t deviate from the NAIC parts model rule, which as the DOI summarizes as demanding notification and consent but “remains silent as to who pays the additional expense for the OEM parts when a non-OEM (part) is available.” (Insurance agencies and the NAIC: That 17-year old model rule needs a serious overhaul for precisely the transparency and technology reasons described above.)

Safelite, State Farm and PCI recommended throwing out the new language and using the old language. “NAMIC recommends withdrawing the proposed amendments to the regulation,” the DOI added in its summary, though it’s not clear why it sought this alternate means to the identical end.

Be heard: Gov. Matt Mead can be reached here.