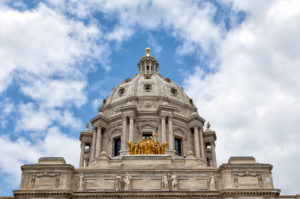 Minnesota House Commerce Committee Chairwoman Laurie Halverson has pulled a bill holding insurers to OEM repair procedures — except on parts — just prior to her panel hearing it, the AASP-MN reported Tuesday.

Alliance of Automotive Service Providers-Minnesota Executive Director Judell Anderson explained that HF 2234 was slated to be amended by its sponsor to remove language defining a “satisfactory repair” for insurers:

“Satisfactory repair” means all repair operations, parts, paint, and materials necessary to restore the vehicle to its pre-loss condition. Satisfactory repair includes completion of vehicle repairs consistent with the repair procedures, specifications, and other documentation issued by the original equipment manufacturer.

However, the bill would have still retained a provision holding insurers to those repair procedures.

Anderson said the bill would have been slightly rewritten under the author’s amendment planned by Rep. Ruth Richardson, D-Mendota Heights, to change the “conditioning payment” language to more straightforward language banning denying a claim over the use of an OEM repair procedure.

The amended bill would have preserved retained insurers’ exemption to following OEM repair procedures regarding parts. Most automakers have recommended against using anything other than new versions of their own parts, a point raised by alternative parts suppliers in response to similar bills.

The existing Clause (7) in Minnesota 72A.201, Subdivision 6, would instead continue to regulate insurer parts behavior. That law states insurers can’t force policyholders to accept aftermarket parts for anything except glass.

Clause (7) does permit recycled parts, according to Anderson. The law merely forbids requiring that “parts, other than window glass, must be replaced with parts other than original equipment parts.” (Recycled parts are OEM parts, after all — just used versions.)

“The proposal would not have changed current law regarding the types of parts to be used in the repair of a damaged vehicle,” the AASP-MN wrote in a news release Tuesday.

Halverson, D-Eagan, pulled the bill from a hearing scheduled for March 15, according to the AASP-MN.

“However, late on March 14th, the Alliance was contacted by the bill author, Representative Ruth Richardson, who shared concerns of the Committee Chair, Representative Laurie Halverson, regarding the lack of agreement between the insurance industry and the repair industry,” AASP-MN wrote Tuesday. “The Chair opted to pull the bill from the Committee Agenda in favor of continuing discussions between the two industries with the intention of trying to find accord.”

According to the news release, AASP-MN had already conducted “two meetings with representatives of the insurance industry and an exchange of proposed amendments, the repair industry refocused its attention to adding a new provision to the unfair claims practices,” resulting in the planned amendments.

Anderson explained that the Commerce Committee likes what it calls “‘peace in the valley.'” It’s not interested in brutal legislative fights, she said.

Ultimately, some bills are just going to be unavoidably controversial, it seemed to us. Anderson said sometimes bills held to pursue accord will be granted a hearing regardless in a future Minnesota session, other legislation might not.

The AASP-MN was still optimistic that it could see the change come before the Legislature.

“While it was disappointing to have the bill pulled just hours before the hearing, the author, Representative Richardson, has indicated a willingness to secure additional time with Chair Halverson to more thoroughly brief her on the importance of AASP-MN’s proposed change,” the trade group wrote Tuesday. “There has also been discussion about having an ‘informational hearing’ in order to better educate the Committee as a whole about the repair industry’s issues and concerns.”

“We want to maintain those good working relationships and expand our network of contacts at the Capitol in hopes of pressing forward with this issue in the coming months,” AASP-MN lobbyist Kevin Walli said in a statement.

“I appreciate that several associations are working closely on this worthwhile effort, for the benefit of our industry and its consumers,” Amberson, who also serves on the Automotive Service Association board, said in a statement. “I remain optimistic that we can sooner or later accomplish our goal of legislation that protects the collision repair shop’s inclination to repair vehicles properly, according to vehicle manufacturer procedures.”

The ASA, Alliance of Automobile Manufactuers and the Society of Collision Repair Specialists had provided support to AASP-MN, the state trade group said.

The Minnesota Capitol is shown. (Wolterk/iStock)