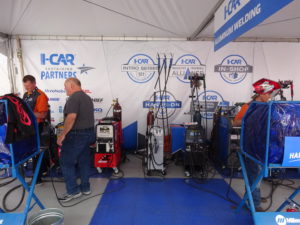 I-CAR’s Collision Repair News feed recently included a reminder regarding Ford’s OEM procedures: Don’t go off the images when determining the number of welds to put on the vehicle.

The educational organization cited a Ford/Lincoln representative who said: “The images in the workshop manual are quick visual depiction, not the actual count. Follow what the vehicle had originally, following the typical guidelines and options for equipment.”

“It’s a general guideline,” Bonanni said. Over a vehicle’s production run, the OEM might slightly alter the joining with “subtle differences,” such as a weld added or deleted.

If it instructed shops to follow the image in the repair procedures, Ford would be creating an “immediate defect” every time it subtly changed the joining at the factory, Bonanni pointed out.

The image gives “just a guideline” to be aware of the welds, Bonanni said.

The concept Bonanni and I-CAR described could be found in the 2019 Ford Ranger repair procedure manual on Wednesday. Though the procedures for a B-pillar installation on a Crew Cab depicted numerous spot welds being restored, the image was preceded by the comments:

Bonanni described this guidance — go off the vehicle rather than the illustration for welds — as routine, something taught in basic I-CAR and industry courses.

An installation procedure for the 2019 Ford Ranger Crew Cab depicts spot weld locations on the B-pillar. However, Ford instructs repairers to refer to the actual factory welds on the original (Provided by Ford)