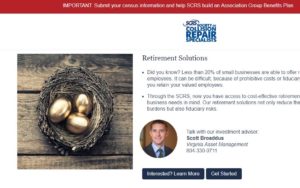 The Society of Collision Repair Specialists on Tuesday announced it had formally launched its 401(k) program for member companies, an initiative that could help smaller auto body shops compete with larger rivals on benefits.

SCRS and partner HR services firm Decisely have developed a program which allows multiple small businesses to team up and spread the cost of a 401(k) among each other.

“They’re quite expensive,” especially for small businesses, Decisely marketing Vice President Diane Peoples said in 2018. She said the savings can be as much as 50 percent of the 401(k) fees to an employer.

“A 401k plan has several layers of cost and like many businesses, pricing improves with scale,” SCRS wrote in a news release Tuesday. “By joining with other employers, association members can achieve greater numbers, which drives down expenses for participants.”

“Our board is comprised of small business owners, and feel strongly about finding ways to support and assist our team members,” SCRS Chairman Kye Yeung (European Motor Car Works) said in a statement. “We are also all keenly aware that there is a challenge for many businesses like ours as a result of the costs and administrative burdens that go along with offering competitive benefits. It was a priority for this organization to find ways to alleviate some of those hurdles to positively impact the businesses we serve, and the lives of those they employ.”

Virginia Asset Management partner Scott Broaddus has been tapped as the investment advisor for the plan and participating SCRS members. His company will also offer members with existing 401(k)s or simple IRAs a free cost and investment options analysis.

“A business owner offering a 401(k) plan is required to run a compliant retirement plan while often having little previous experience managing workplace benefits,” Broaddus said in a statement. “Over the past 12 months, SCRS has worked hard to design an Association 401(k) plan that will save its members both time and money. With compliance and fiduciary oversight support, a business owner now has professional partners to ensure plan compliance while also saving on average 25% in total fees for its members with an existing 401k plan.”

SCRS said collision repairers could also save administrative liability and time by using its 401(k) option.

As former SCRS Chairman Andy Dingman (Dingman’s Collision Center) observed during the organization’s open board meeting Tuesday, his company has grown from offering a simple IRA to a 401(k) with fiduciary responsibility on the plan provider. He called the latter a “really big benefit” to his shop, for it offered an additional layer of Employee Retirement Income Security Act compliance protection.

“Employers who use the Plan will have partners who provide fiduciary services and formalize their Plans with an Investment Policy Statement, Investment Committee Meeting Minutes and Employee Education,” SCRS wrote in the news release. “This is uncommon in employer plans under $5 million in assets.”

In terms of saving time, the program allowed small shops without any full-time HR employees to delegate retirement-related tasks to a third party. Without such a partner, the shop owner or another employee would have to handle those items along with their other responsibilities.

If your shop already offered a retirement plan or was considering doing so, “this is such a great opportunity,” Dingman said.

“There has never been a better time to be a member of SCRS, or to consider joining,” SCRS Executive Director Aaron Schulenburg said in a statement. “We have said repeatedly that we believe small businesses deserve more, and that we are going to do everything in our power to leverage the opportunities created by the size and scope of SCRS’ membership. We are exceptionally fortunate to have partners with a similar vision, and look forward to serving our members – and their employees – well with programs like this that can contribute to increased quality of life.”

The option to combine forces on 401(k)s had already existed for small businesses in general, but it received a boost in October 2018 when the Trump administration announced a proposed Department of Labor rule regarding Association Retirement Plans and 401(k)s offered by Professional Employer Organizations, which are companies that contract to handle some human resources duties for other businesses.

“Under the proposed rule, Association Retirement Plans could be offered by associations of employers in a city, county, state, or a multi-state metropolitan area, or in a particular industry nationwide,” the Labor Department wrote last year. “Sole proprietors, as well as their families, would also be permitted to join such plans. In addition to association sponsors, the plans could also be sponsored through Professional Employer Organizations (PEO). A PEO is a human-resource company that contractually assumes certain employment responsibilities for its client employers.”

Decisely CEO Kevin Dunn at the time said the Labor Department had opened an “aperture” to make it easier for collective plans.

Even if you don’t use SCRS’ option, some sort of retirement plan could be crucial to a small shop which wants to stay competitive with local, regional or national MSOs.

Less than 60 percent of collision repairers surveyed offered retirement as a benefit in 2016, according to an I-CAR-Collision Repair Education Foundation study. That’s a little less than three years prior. (Less than three percent of auto body shops offered no benefits at all in 2016, I-CAR and CREF wrote.)

Retirement could be increasingly attractive to an industry that appears to be graying.

The CEO of Gerber Collision’s parent company reported in March in March that the company’s normalized same-store sales jumped 5.2 percent in the fourth quarter of 2018. Boyd Group CEO Brock Bulbuck indicated a major factor was also the company’s progress on its technician shortage. The company has a backlog of work that simply can’t be converted to sales if it lacks the techs to do the repair and get paid.

The Boyd Group, which owns Boyd Autobody, Gerber Collision and Assured Automotive, last year put half of the projected $11 million CAD savings from the U.S. tax cuts into better benefits for its technicians. It increased vacation and holiday pay for commissioned repairers, and it doubled its employer match and shortened vesting on repairers’ 401(k)s.

“We’re not out of the woods” on the tech shortage, but the Boyd Group made enough progress to post the kind of results it did in the fourth quarter, Bulbuck told analysts on an earnings cal.

The Society of Collision Repair Specialists said April 16, 2019, it had launched a 401(k) program for members. (Screenshot from https://scrsbenefitscenter.decisely.com)