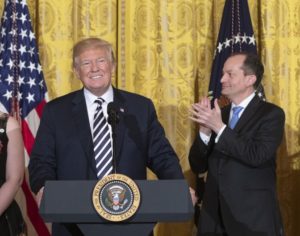 The Trump administration on Monday announced it planned to make it easier for small businesses to team up and use their collective buying power to secure 401(k)s.

Kevin Dunn, CEO of human resources services firm Decisely, said the ability for small businesses to partner on 401(k)s had already existed, but the administration had opened an “aperture” to make it easier.

The Department of Labor’s proposed rule discusses Association Retirement Plans and 401(k)s offered by Professional Employer Organizations, which are companies that contract to handle some human resources duties for other businesses.

The announcement Monday came a few months after the agency decided that small businesses including sole proprietorships can band together by geography or under a trade group and collectively solicit a better deal on health insurance — a move encouraged by Republican President Donald Trump.

The Society of Collision Repair Specialists announced in August that it and Decisely would offer such an opportunity to its members. SCRS also had been working to set up a collective 401(k) opportunity for member shops prior to the announcement Monday.

“(T)hrough the new platform with Decisely, and in conjunction with other partners, SCRS is working to develop an industry-first retirement benefit solution for employers looking for ways to offer their employees retirement benefits, while reducing the administrative burden and mitigating the fiduciary risk  and responsibilities,” Executive Director Aaron Schulenburg wrote in an email. “More details on this program will be announced in 2019.“

Dunn will discuss the potential of such small-business collaborations on benefits on Friday, Nov. 2, during SCRS’ inaugural SEMA IDEAS Collide Showcase, a collection of short, make-you-think presentations similar to TED Talks.

“Two decades ago the internet changed the retail and the airline industries.  Health Insurance and Human Resources are long overdue for innovative and fundamental change,” Dunn’s presentation description states. “Regulatory changes and technology advancements are providing more opportunity than ever to leveraging collective buying power of association networks to lower businesses health insurance costs. Small businesses employ 53% of the US workforce, and through these market shifts those employers who are connected through their industry will have more access than ever to the same comprehensive benefit plans as large corporations.  The solution is here, you need only to be connected to it!”

Dunn said that health insurers and 401(k) providers typically view a collection of small businesses and a large business of the same size equally. That means a collection of, say, 300 auto body shops and a 300-location MSO are going to get a similar deal.

This could be crucial to a small shop which wants to stay competitive with local, regional or national MSOs.

Less than 60 percent of collision repairers surveyed offered retirement as a benefit in 2016, according to an I-CAR-Collision Repair Education Foundation study. That’s a little less than three years prior. (Less than three percent of auto body shops offered no benefits at all in 2016, I-CAR and CREF wrote.)

Retirement could be increasingly attractive to an industry that appears to be graying.

In the case of health insurance, the collaborating businesses can offer health insurance at a reduced cost to the employer and lower premiums for the employees. For 401(k)s, the savings come in being able to split the annual cost among multiple employers.

“They’re quite expensive,” especially for small businesses, according to Decisely marketing Vice President Diane Peoples. She said the savings can be as much as 50 percent of the 401(k) fees to an employer.

Dunn said there was never a ruling per se forbidding such collective health or 401(k) efforts, but the fear of joint liability — the collective becomes responsible for its individual companies’ actions — stifled them. The government’s actions lift this concern, according to Dunn.

Health insurance is still regulated by individual states, but a collective plan established in one of the states following the federal government’s lead can be extended to the other 49, according to Dunn.

Companies that already offer a 401(k) could switch to a collective plan, according to Dunn.

“Under the proposed rule, Association Retirement Plans could be offered by associations of employers in a city, county, state, or a multi-state metropolitan area, or in a particular industry nationwide,” the Labor Department wrote on Monday. “Sole proprietors, as well as their families, would also be permitted to join such plans. In addition to association sponsors, the plans could also be sponsored through Professional Employer Organizations (PEO). A PEO is a human-resource company that contractually assumes certain employment responsibilities for its client employers.

“By expressly permitting these new plan arrangements, the proposal would enable small businesses to offer benefit packages comparable to those offered by large employers. The Department expects the plans to reduce administrative costs through economies of scale and to strengthen small businesses’ hand when negotiating with financial institutions and other service providers.”

Association health plans offer employees a variety of plan choices and charge all employees the same for the premiums, and they forbid charging different employers different amounts based upon their workforces’ health.

However, businesses will still retain flexibility under group 401(k) plans to set their own employer-match amount (2-6 percent is the typical range) and vesting period (four years is the average), according to Dunn. The latter refers to the amount of time an employee must stay with a company to collect the amount the employer has been matching.

“President Donald J. Trump is moving to expand quality, affordable workplace retirement plan options for America’s small businesses and their employees. Many small businesses would like to offer retirement benefits to their employees, but are discouraged by the cost and complexity of running their own plans,” U.S. Secretary of Labor Alexander Acosta said in a statement. “Association Retirement Plans give these employers a simple and less burdensome way to offer valuable retirement benefits to their employees. The proposed rule helps working Americans – and their families – take care of themselves in their retirement years.”

Be heard: Leave public comment on the proposed regulation through Dec. 24 here.