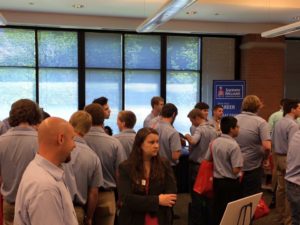 Collision repairers might not be able to stop technicians from jumping ship — or failing to apply in the first place — without sweetening the deal for employees, based on the results of a survey of nearly 200 collision sector businesses released last month.

The Canadian arm of Raymond James on May 9 discussed the results of the poll it and collision repair financial consulting company Supplement Advisory conducted in the first quarter. Fifty-seven percent of the 173 survey responses came from the collision repair vertical; other related industries such as paint jobbers (the second-largest vertical) participated as well. Seventeen percent of the responses came from Canada.

Asked what they were doing to address the shortage of technicians/skilled labor, 38 percent of respondents reported “Better Pay,” while 32 percent said “Enhanced Benefits.” Another 58 percent said they were using “Training/Career Planning,” though it’s unclear which strategy or strategies are encapsulated here. (For example, is it sending a C-level technician to training to fill a B-tech vacancy, growing external candidates with zero collision training into repairers, or providing a current employee a path to their desired job, like a tech who wants to be a manager.)

In any case, the answers show that doing nothing and hoping the resumes pour in or the staff stays constant might not be an option. Clearly, some of your competitors have a plan, and they’ve had one for a while — Raymond James reported a similar breakdown of responses could be seen throughout the entire year ending March 31.

On the other hand, the proportion of respondents calling technician availability better than a year ago rose from 0 percent in the second quarter of 2018 to 6 percent by the first quarter of this year. (Of course, this might merely reflect the strategies discussed above paying off for the companies polled, while the rest of the industry remains even more starved for labor.) 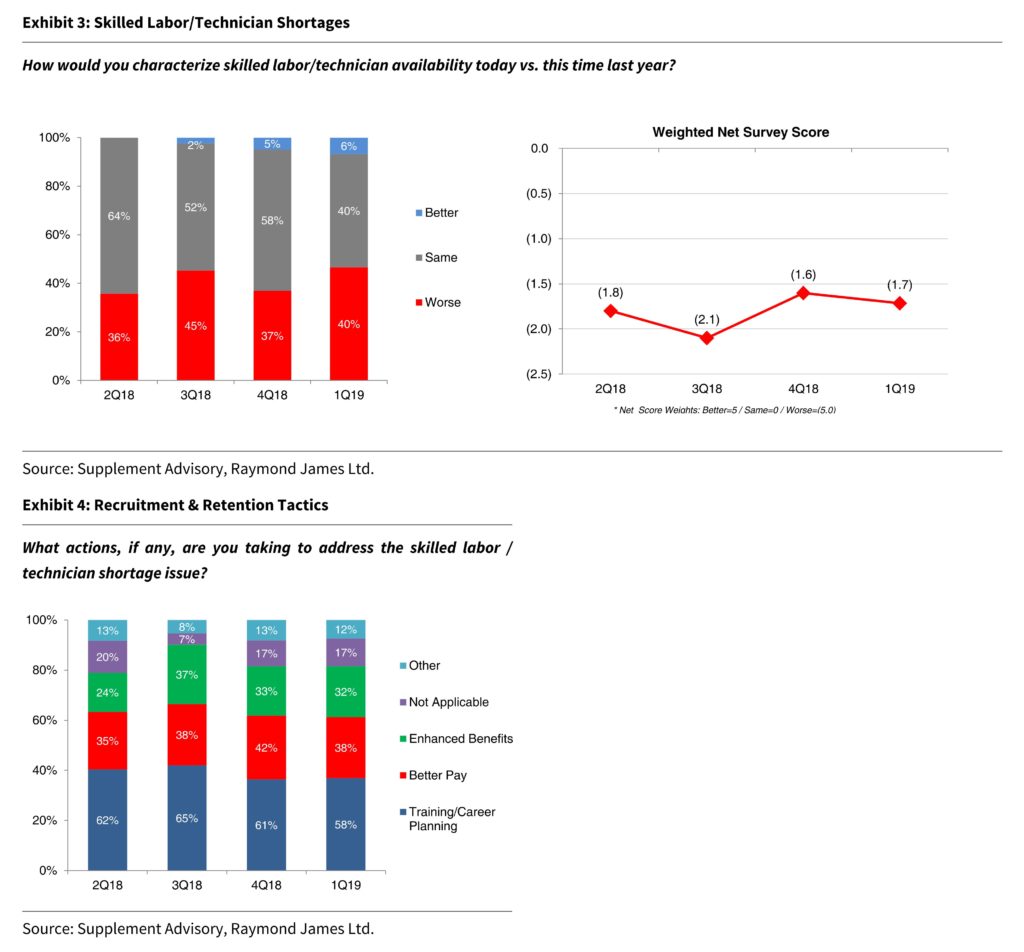 “Similar to prior surveys, most industry participants indicated that technician shortages remain a key pain point. The ratio of respondents
categorizing availability as ‘worsening’ increased modestly to 40% (vs. 4Q18: 37%), suggesting this industry-wide concern continues to affect operators across North America,” they wrote. “From a mitigation standpoint, while respondents continue to deploy an array of strategies to address this issue, we note that ‘Better Pay’ and ‘Career Planning’ continue to be the preferred mitigation strategies.”

The respondents also brought up the tech shortage when asked the open question “What other factors/issues are keeping you up at night (if any)? Feel free to elaborate on any of the issues highlighted above or other industry trends (i.e. ADAS, OEM certification).”

According to Hansen and Pawar, responses included:

● Lack of qualified techs is less than sustainable. Tech and management skill a critical issue

● Labor shortage. Ability/inability to keep up with technology.

● Labor Shortage, Costs involved in becoming OE Certified due to poor coordination of
acceptable equipment across lines, Insurer unwillingness to compensate us fairly, …

Besides potentially having to spend more to stay competitive with the tech shortage, repairers might need to invest to keep up with rivals’ equipment.

“While capital spending expectations have been high for several quarters, they seemingly took another step higher this period,” Hansen and Pawar wrote. “Specifically, we highlight that nearly half of respondents (49%) indicated they expect to spend more on capital equipment over the next 6 months (vs. the prior 6 months), while only 10% indicated they expect to spend less. While these spending pressures might be construed as a headwind for the sector, we argue these same pressures also carry indirect benefits (i.e. market share) for the larger, well-capitalized players capable of managing this investment cycle.”

On the plus side, it’s easier to get capital to fund all of this — or perhaps not. Raymond James reported consecutive-quarter gains in the proportion of shops reporting both improved and decreased access to external funds.

“While we do not collect this data based upon the size/scale of industry respondents, we have to wonder whether there is an underlying bifurcation occurring here, where the smaller operators are increasingly being squeezed by lenders,” Hansen and Pawar wrote. “Either way, given the robust M&A trend still sweeping the sector, we will continue to monitor this variable closely.”

Raymond James authors Steve Hansen and Kanish Pawar wrote in a May 9, 2019 reported that a first-quarter survey of the North American collision sector entities by it and Supplement Advisory drew 173 responses. (Provided by Raymond James Canada)