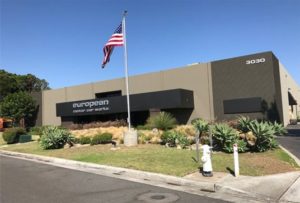 California auto body shops can see the “prevailing rate” for their shops and their rivals — but not necessarily the actual posted labor rates they provided — with the results of various surveys made available by the California Department of Insurance this spring.

The actual posted rates shops report to insurers still aren’t required to be public record following the CDI’s 2016 overhaul of its labor rate survey regulations. Only the prevailing rate associated with a particular facility or area must be disclosed, similar to the regulation the new rule replaced.

Insurers using the Standard template developed by the CDI can assign a prevailing rate in a geography specific to each individual shop, and several insurers who’ve filed survey results with the CDI have done so.

Insurers are also free to attempt other survey formats, but they run the risk of having their results declared an unfair claims practice by the CDI. Using CDI’s suggested survey format carries a “rebuttable presumption” of good faith. A carrier also can go without a survey.

Though the rule’s been on the books a while, it can still lead to a double-take when a shop sees a rate listed next to its facility which isn’t its actual charge.

Jennifer Yeung, office manager and estimator for European Motor Car Works, recently reported being surprised by this on a claim involving Ameriprise Insurance.

Ameriprise used the CDI’s sample survey format and refused to pay the luxury shop’s body rate to repair a Land Rover, a departure from its past claims handling, Yeung said. The carrier presented data listing the high-end facility’s sheet metal rate at $52, rather than European Motor Car Works’ actual, survey-reported rate of more than $10 higher, she said.

Yeung complained to the CDI and was told the rates displayed for European Motor Car Works and 6,408 other shops in an Amerprise spreadsheet are the prevailing ones for the shop’s area, not the actual rates.

An insurer can pay the prevailing rate calculated through a good faith survey rather than a shop’s rate.

“Our labor rate reflects the rate which the majority of the surveyed shops are charging; this includes data from your shop,” Ameriprise senior divisional manager Tom Zeigler wrote to European Motor Car Works.

“… We do not owe beyond an established fair and reasonable rate in your geographical area. We filed a CA Insurance Department Standardized Labor Rate Survey, and therefore, we have taken the reasonable steps to quantify our contractual or legal obligation for payment of the claim and we are acting in good faith to settle this and all such claims in a prompt, fair and equitable manner.”

The distinction is described in the agency’s 2016 survey regulation but can be somewhat confusing in the actual public record. (It’s indicated by a tab at the bottom of the Ameriprise Excel file rather than the title or column headers of the spreadsheet.)

“This information is deceiving because any insurer that obtains this list automatically assumes these are our rates,” European Motor Car Works owner Kye Yeung, Jennifer Yeung’s father, argued in an email to Repairer Driven News. Not all insurers conduct labor rate surveys.

Jennifer Yeung said her father didn’t want any rate associated with the facility but its actual surveyed rate. She said prior labor rate surveys saw insurers listing the correct surveyed rate for the shop.

“He doesn’t want European listed with wrong rates,” she said.

This might be even more confusing for a shop, consumer or carrier when studying the results generated by multiple insurers using the same methodology. The CDI provides a mechanism for insurers who follow its templated survey to easily input survey results and generate prevailing rates for each shops. This appears to have been used to generate Ameriprise and other carrier’s spreadsheets.

GEICO, for example, appears to have used the same standardized version Ameriprise did. It lists European Motor Car Works at $55 an hour for body work. Nationwide, meanwhile, pegs the shop to $52 for body work.

The CDI’s suggested survey format defines a market as every responding shop in a region extending a mile out from a six-shop cluster of survey respondents closest to or including the shop whose rates are being compared to the market (assuming the shop completed the survey). 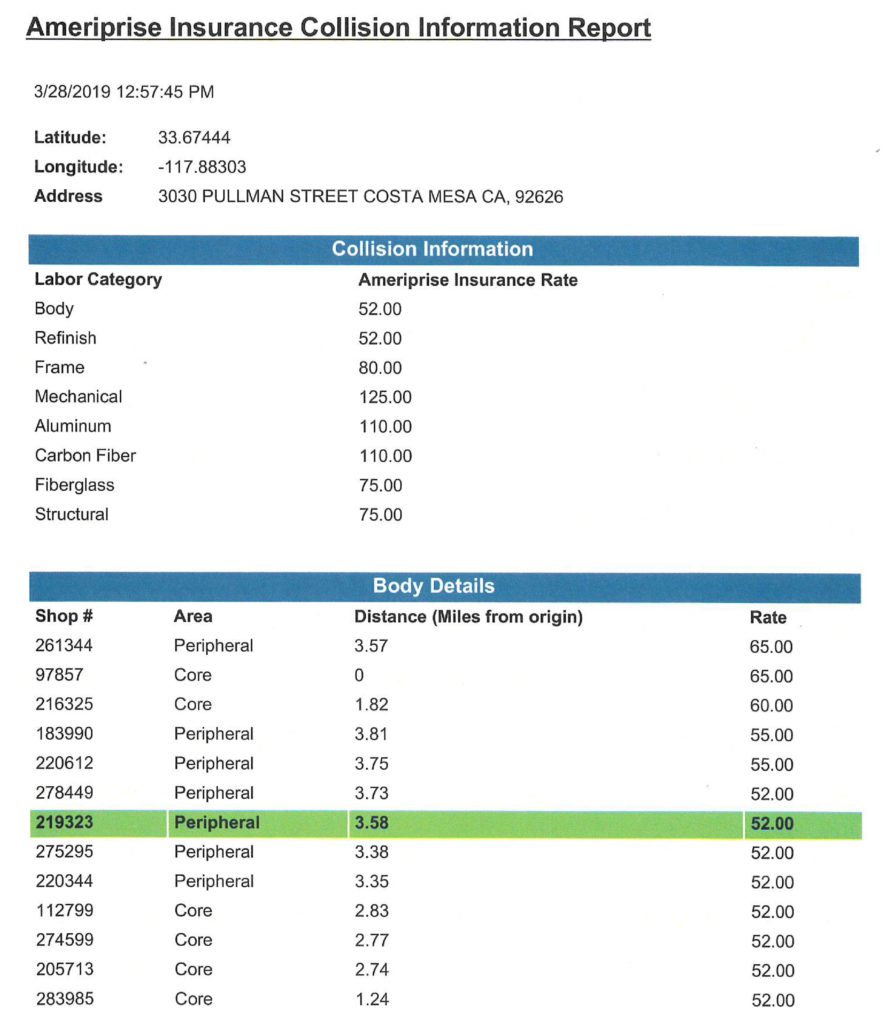 The CDI ultimately sent Yeung a copy of Ameriprise’s survey results from six core shops and seven peripheral shops used to calculate the $52 rate for European Motor Car Works in this manner.

Results will vary if a body shop in an area completes a survey for one insurer but not another.

Under the CDI’s stock format, insurers only incorporate the nearest shops that reported results. The California Autobody Association championed the template in 2016 and said last month it “works well” when handled correctly and shops respond.

For example, let’s say one insurer receives results like those in the CDI’s 23-shop example above. But another insurer not only fails to receive a response from Shop 5, they also lack responses from Shops 7 and 8. The core radius widens to bring in Shops 9 and 10, and the periphery starts a mile out from Shop 10.

Tony Cignarale, CDI deputy commissioner for consumer services and market conduct, said in an interview May 29 about general CDI policy (not Yeung’s specific case) that an insurer must use its own survey. Neither the shop nor the insurer can cherry-pick a higher or lower prevailing rate calculated by another carrier’s study, he said.

(So it probably behooves every repairer in California to check which insurers have filed rate survey results and confirm their facility contributed to that research. That way, consumers, insurers and repairers will receive the most accurate results.)

However, if a shop does complete a survey and two months later raises its rates organically, it can’t seek a do-over, according to Cignarale. The facility may have to wait one to two years until the next study is mailed out. Insurers are for the second year after a survey permitted to use the same survey results as long as they adjust them upward using the California CPI inflation rate.

Ameriprise in a spreadsheet dated July 2018 calculated the prevailing rate for European Motor Car Works using it and 12 other facilities within a less than 4-mile radius. (Provided by California Department of Insurance)

California Department of Insurance labor rate survey regulations suggest a market be the nearest six shops who respond to the survey plus every respondent in a circle extending out a mile from the furthest shop. (Provided by CDI)