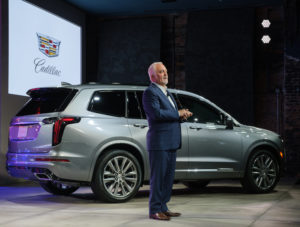 “No aluminum,” Hoffman said at the 2019 North American International Auto Show the day after the XT6’s reveal. “It’s all steel.”

Hoffman said the OEM determined it could obtain strength and repairability at a “minimal mass penalty” by using higher-strength steels.

Going by percentages, the XT6 probably had more high-strength steel than the XT5 and XT4, though “it’s a little bit tricky” to calculate it, Hoffman noted. Going to a stronger steel allows one to get strategic, “almost surgical,” rather than use a larger mass of the metal,he said.

Hoffman said the XT6 shares some elements of its underbody with the XT5, but “rockers up,” everything was new for the XT6.

The XT6 has a higher level of torsional stiffness — 34.1 — than other crossovers in GM’s portfolio, Hoffman said.

This could mean consumers would be more likely to notice a different ride feel if a repairer fails to restore the vehicle properly. 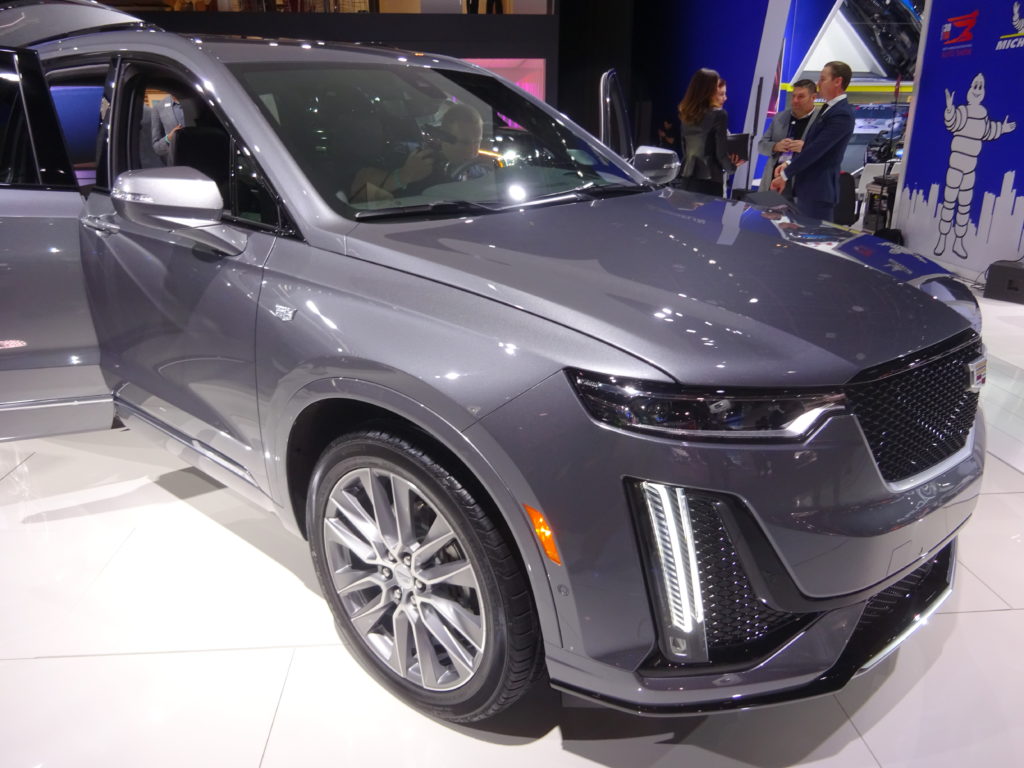 The stiffer a structure becomes, the more the acoustics and suspension can work, Hoffman said. Delivering a “nice stiff structure” means “it’s not vibrating, it’s not wiggling,” while the things you’d “want to wiggle” like a suspension “can do its job,” he said.

The larger and squarer a vehicle becomes, the more difficult it is to deliver stiffness, according to Hoffman.

A Cadillac news release reports “the vehicle structure is designed to help keep occupants safe, with premium body materials and features such as boxed, splayed front rails and a state-of-the-art restraint system, including seven standard airbags.”

ADAS and other tech

Hoffman also suggested repairers will need to pay close attention to the trim package on the SUV to avoid installing the wrong sensors.

The regular park assist feature uses eight ultrasonic sensors split between the front and rear of the vehicle. The advanced park assist option — which allows the XT6 to park itself in a regular or parallel space — relies on sensors in those locations and two more on each side of the vehicle.

All 12 sensors on an autoparking XT6 are “slightly different” than the eight used in the base park assist function, according to Hoffman: The sensor fidelity is better. 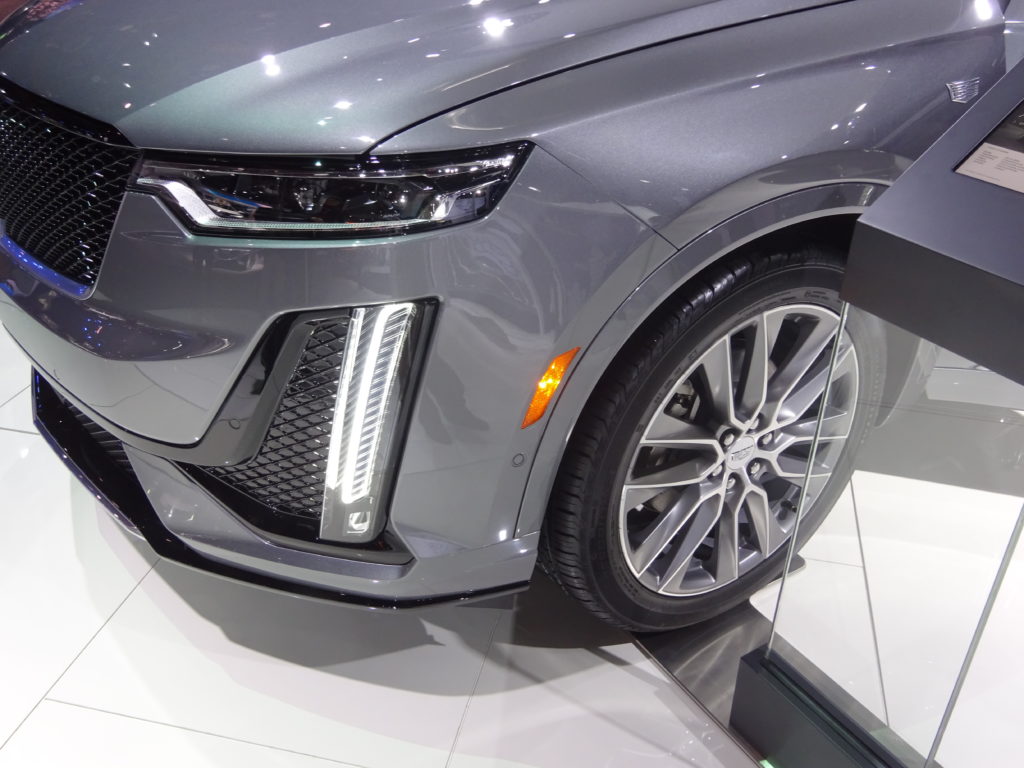 The vehicle has 12 sensors, four on the front and rear and two on each side, according to Hoffman. If the vehicle carries the regular park assist feature,

The headlights of an XT6 in your shop also contain a notable piece of technology — even if the driver can’t use it yet. Higher-end lighting available includes two matrices of LEDs which can be incorporated into an “advanced headlamp system” in areas where the technology is legal, according to Hoffman.

Typically, advanced headlights on the market today and standard on the XT6 can switch themselves from high to low beams and back again to avoid blinding oncoming traffics. But should the customer have the higher-end XT6 illumination, the LED matrices will take this even further. The lights can control themselves to only dim a pattern in the shape of the vehicle in the other lane and even move that lower-beam portion to follow the other car.

The technology is legal in Canada, but NHTSA hasn’t yet approved it, Hoffman said. Asked if GM could enable the system through an upgrade immediately if NHTSA gave its blessing, he said “the ability is there,” but the OEM would have to figure out how to market it.

The XT6’s lights are all still LEDs at the base level, Hoffman said. Both the starting Premium Luxury and higher Sport trims can be upgraded to the new, smarter adaptive lighting technology, he said.

Other ADAS or related features are standard on the XT6. The SUV has autobraking, including for pedestrians and lane-keeping. It also has blind-spot and rear cross-traffic monitoring and alerts — but no autobraking.

The alerts also can be sent to a standard “Safety Alert Seat,” which vibrates to warn drivers of a threat. General Motors active safety technical fellow Raymond Kiefer in 2012 said research shows the seat might work better than noise alerts.

“Vibrating alerts also may help drivers who do not hear beeping alerts due to hearing loss or competing noises, and may be preferred by drivers and passengers who might be annoyed by beeps and shut crash avoidance features off,” Kiefer said in a statement. “The last thing we want is for drivers to turn off features with safety benefits.”

Also standard: a “Teen Driver’ system, a rear camera able to wash itself, and a rear-seat reminder cued to the operation of the rear doors.

Information about how close you’re following the vehicle in front of you is standard, but you’ll have to pay extra to upgrade to a package containing adaptive cruise control.

The Driver Assist Package with the latter feature also throws in “Enhanced Automatic Emergency Braking” and “Advanced, Automatic Seat Belt Tightening.” The latter appears to be able to tighten the belt automatically during potentially dangerous situations.

An optional Enhanced Visibility and Technology Package adds a head-up display, the ability to turn your rearview mirror into a camera and a washer for that camera, surround vision and recording, rear pedestrian alerts (but not autobraking) and the autoparking described above.

Night vision is also an option.

Super Cruise isn’t available on the XT6 yet, and unlike the smart headlights, it’s not a situation where the hardware exists but isn’t activated, according to Hoffman. The Super Cruise rollout across the Cadillac’s fleet won’t start until the 2021 model year, he said.

A 2020 Cadillac XT6 with a higher-fidelity side autoparking sensor is seen at the 2019 North American International Auto Show. (John Huetter/Repairer Driven News)