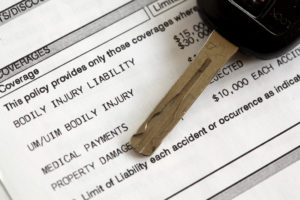 A new study by researchers from Temple and the Universities of Alabama and Wisconsin ties rising premiums to factors like the cost of medical care and repairing more advanced vehicles rather than heightened auto insurer profits.

“Keeping expenses low and on budget is a key concern for nearly all Americans, which is one reason why the Triple-I’s article on the nine ways to lower your auto insurance costs is one of the most widely read items at our website each year,” III CEO Sean Kevelighan said in a statement Jan. 7. “While it can be seemingly easy to suggest insurance rates are solely a result of a carrier’s desire to make a profit, a fact most in the business already know is that underwriting oftentimes represents a small fraction of operating profit. The study set out to illustrate and explain the real drivers of auto insurance rates, many of which the carrier has absolutely no control.”

The study in the NAIC’s Journal of Insurance Regulation by Martin Grace, J. Tyler Leverty and Lawrence Powell found a strong correlation (0.982) between the cost of insurance and the cost of auto body repair. However, it addressed the issue in the context of advanced vehicle technology rather than any behavior on the part of body shops. And it didn’t present this technology, the operations needed to restore it or the collision repair industry in general as items demanding a public policy fix.

“Importantly, it is beyond the scope of this study to pass judgment on the use of special materials or safety features. Both offer value to consumers and society,” the researchers wrote. “Nonetheless, discussion of auto insurance costs is not complete without including these topics. …

“There are many potential strategies for reducing the cost of auto insurance. Seatbelts and airbags reduce the severity of bodily injury losses but do nothing to limit the frequency of accidents. Antilock brakes, lane sensors, blind spot monitors and collision avoidance systems reduce loss frequency but increase property damage severity. … Considering the tradeoffs involved in any given strategy is crucial to successful public policy.”

“(E)fforts to reduce property loss severity are ill-advised because they are likely to involve making cars either less safe or less fuel-efficient,” the researchers ultimately concluded.

The researchers also predicted that severity would be felt less as technology lowered frequency.

“Some of the contributing factors, such as crash repair costs, should partially self-correct over time,” Grace, Leverty and Powell wrote. “Once a critical mass of the vehicle fleet has crash-avoidance technology, the reduction in loss frequency should offset at least part of the increase in loss severity.”

The study examines several strategies to reduce the price of auto insurance, including:

• Outlawing the use of handheld cell phones and texting while driving, and enhancing enforcement of existing laws 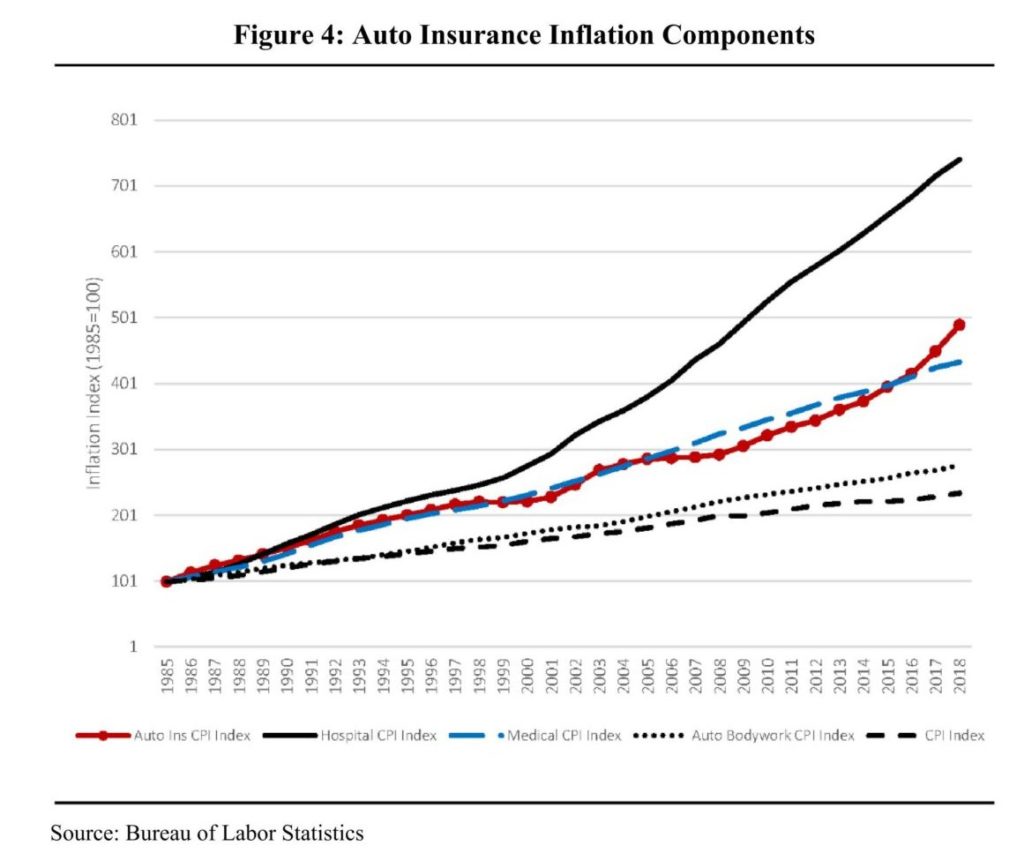 “This correlation is noteworthy because only 32% of losses involve bodily injury,” Grace, Leverty and Powell wrote. “Bodily injury losses are not divided proportionally across all types of medical care. Therefore, it is possible that the types of medical care provided to crash victims face a systematically higher inflation rate than medical care in general. In fact, a large percentage of auto insurance injury claims involve hospital treatment, which has risen in cost much faster than other medical services. Villaveces et al. (2013) find that vehicle crashes account for 2,765,900 emergency department visits in 2010. While one crash often sends more than one person to a hospital, the NAIC Auto Insurance Database Report only shows 1,715,569 bodily injury claims in 2010. Another exacerbating factor is cost shifting, when medical providers charge private payers, such as auto insurers, inflated higher rates than they charge to other payers such as private health insurance, Medicaid and Medicare (IRC, 2010). Therefore, it seems auto insurers pay more than other payers for medical services because they incur relatively expensive types of medical services (e.g., hospital services), or they pay a higher price for the same services, or both.”

The study also said addressing bodily injury expenses would do more to help those forced to buy insurance by the government than focusing on property damage.

“Bodily injury losses are 32% of total losses, and property damage losses are 68%,” Grace, Leverty and Powell wrote. “However, within the category of liability insurance—the only mandatory coverage—bodily injury losses are 53%, with property damage representing the remaining 47%. Thus, efforts to reduce property losses might have the largest overall effect, but a reduction in bodily injury costs would give the greatest relief for mandatory coverage. This difference is important because purchase requirements are cited frequently in calls to address affordability (FIO, 2017).”

“The increase in the frequency and severity of auto accidents is likely due to increases in the miles driven during a period of economic expansion,” the study stated. “The evidence also points to distracted driving, the increasing cost of collision repair and medical cost inflation as contributing factors.

The study also indirectly suggested advertising isn’t necessarily to blame for higher insurance costs either. Grace, Leverty and Powell reported that the expense ratio, which includes marketing costs, has been decreasing as a proportion of auto insurers’ overall balance sheet industrywide.

“All four ratios appear steady from 2008 to 2013,” Grace, Leverty and Powell wrote of investment, expense, loss and operating ratios. After 2013, the loss ratio increases (through 2016), and the expense ratio decreases. The increase in the loss ratio outweighs the decrease in the expense ratio, causing overall performance to weaken (i.e., the operating ratio increases above 100%). The last four years of the analysis (2014–2017) show zero or negative profit.In examining Figures 1 and 2, it is evident that while automobile insurance costs are steadily increasing over the time period examined, the profitability of auto insurers is not. In fact, the profits of auto insurers are decreasing, suggesting that the increasing cost of auto insurance is likely not due to insurers extracting excess rents from consumers. We also see little change in investment returns.”

“Cost Trends and Affordability of Automobile Insurance in the U.S.”