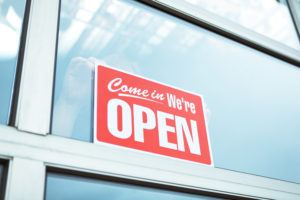 Editor’s note: Collision repairers are essential businesses, but broader COVID-19 shutdowns might have reduced their demand anyway. This might lead some body shops to temporarily shut their doors. But this decision might be premature for some repairers — even if the shop is now operating at a loss — according to consultant Kent Carlson of Ad Meliora. In this guest column, he teaches shops what clues from a balance sheet might help make a smart open/close decision during an economic downturn. The usual caveat: This is for informational purposes and is not meant to be legal or financial advice. Consult with qualified financial and legal professionals before taking action.

The coronavirus pandemic and the measures being taken to stem its advance are playing havoc with the economy here and around the world. In many states, shelter-in-place directives and the closing of non-essential businesses emptied the roadways. With fewer people driving and fewer miles being driven, there are fewer accidents and less work being generated for collision repairers.

With uncertainty about how low demand will fall and how long it will last, some collision center owners are wondering what is better: remaining open and attempting to weather this storm or closing down until it blows through. While there is a myriad of issues to consider in making this decision, I’m going to explain how to know from a purely financial viewpoint when closing is better than remaining open.

Let’s start by discussing overhead. When a business temporarily closes, some expenses still need to be paid. Short of declaring bankruptcy, for example, the business may need to pay real estate taxes, rent, lease payments, some utilities, and other items. These expenses, which need to be paid even if the business is not operating, are “fixed expenses.”

As soon as a business is open for business, additional expenses are incurred. These might include expenses for personnel, accounting or legal assistance, some utilities, training, software and other such items. We call these expenses “semi-fixed,” because they tend to be fixed for small ranges of production, but increase if production rises significantly. For example, when a person is added to the administrative staff, the collision center may be able to increase sales for some time before another administrative employee needs to be added.

Thus, there are two types of overhead: fixed and semi-fixed. Total overhead is the sum of these two components. 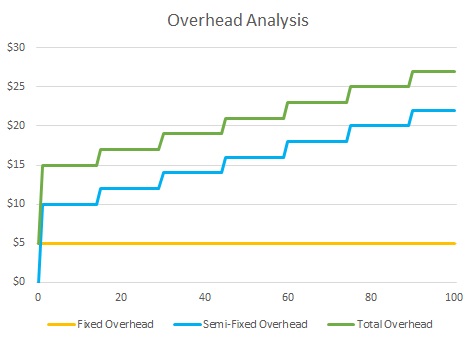 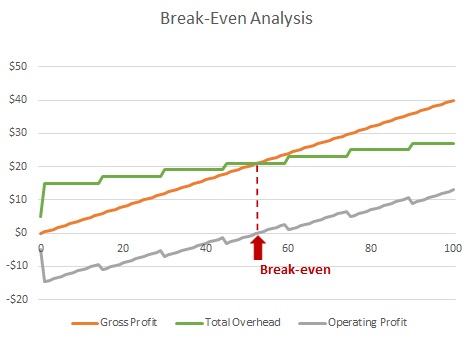 Historically, if you charted this with your shop’s numbers, your business likely has operating routinely on the right side of the chart where the business is making money. But due to the decrease in demand, many shops will be operating further to the left on the chart, at lower production levels, for a period of time. If the business were to still be able to operate to the right of the break-even point despite the decreased demand, then it would make sense that the business should remain open. But what happens if the business will be operating to the left of the break-even point?

This next chart displays the profit or loss of the business if open, the operating profit, and the loss if the business were to close temporarily. 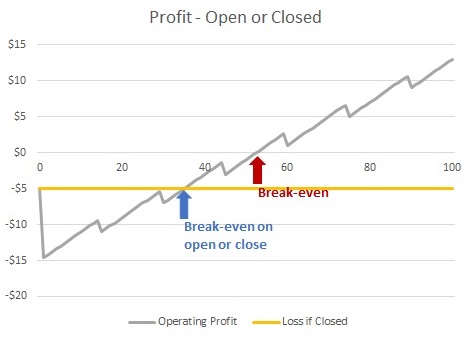 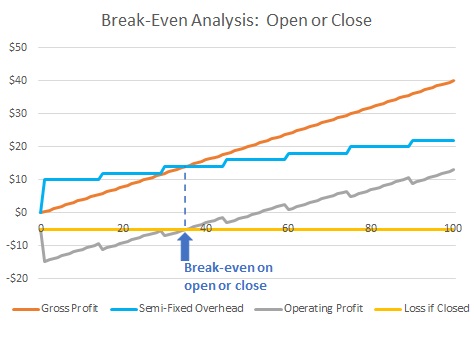 So, from a purely financial standpoint when is it better to close than to continue operating? When the gross profit that can be generated by operating exceeds the semi-fixed overhead expenses.

To determine this new break-even point for your business, you will need to:

Remember that when you first produced half the work you do now, you likely did not have nearly as much overhead. That overhead was added over time to enable production to grow. With the decrease in demand, you will be reversing this process.

Here are several other considerations that should factor into any analysis regarding temporarily closing a business.

Consider how long you believe the decrease in demand will last and the costs of getting the business back up and running. The shorter the length of time the demand is expected to be down, the less likely it makes sense to close. Much of this hesitancy stems from the expense to get things going again, such as the expense of getting your employees back to working productively as a team – and the expense of replacing and training anyone who does not return. It would also include expenses to inform customers that the business is back open, that it can be relied upon to serve their needs now and to take care of any issues in the future. The larger these, or other, expenses to re-open are, the less it makes sense to temporarily close.

Cash reserves should also be taken into account. With greater cash reserves, the option of remaining open despite losses remains viable longer. With fewer reserves, a business may be forced to close at least temporarily. Many in the industry are taking advantage of the Paycheck Protection Program from the CARES Act. When used as intended, these funds could supplement the cash reserves of businesses and give them greater flexibility in deciding whether to remain open or not.

I’m confident that the industry will rebound and that many shops will come out the other side of this difficult period stronger than ever. And although I hope that no one needs to temporarily shut down to make it through, I know that is not realistic. So, knowing how to determine when it makes financial sense to shut down can help you make the best decisions for your business.

Kent Carlson is the founder of Ad Meliora Consulting. See a webinar on this topic at www.collisionresourcesinc.com.

Even if a shop is operating at a loss during the COVID-19 pandemic, it might still make more sense to stay open, according to consultant Kent Carlson of Ad Meliora. (YinYang/iStock)

There are two types of overhead: fixed and semi-fixed. Total overhead is the sum of these two components. (Provided by Kent Carlson/Ad Meliora Consulting)

When gross profit is charted alongside total overhead, the operating profit may also be plotted. (Provided by Kent Carlson/Ad Meliora Consulting)

A representation of profit or loss of a business if open, the operating profit, and the loss if the business were to close temporarily. (Provided by Kent Carlson/Ad Meliora Consulting)

By including the gross profit and semi-fixed overhead lines to a chart showing the rofit or loss of the business if open, the operating profit, and the loss if the business were to close temporarily, it is possible to see that this new break-even point happens at the same production level as when the gross profit and semi-fixed overhead lines cross. (Provided by Kent Carlson/Ad Meliora Consulting)