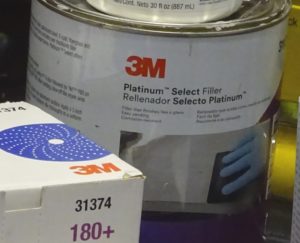 Did you get rust under your body filler? Don’t blame the mud, according to 3M senior technical service engineer Ricky Miller.

“This is a big topic,” he said of the rust-under-filler issue during a 3M webinar Tuesday.

It’s not the filler’s fault, Miller said. The substance’s “top-secret ingredients” are microspheres, talc, styrene and polyester resins, he said.

Rust demands iron, oxygen and moisture, according to Miller.

“Fillers don’t contain any of those,” he said. If you have moisture in your filler, perhaps don’t apply it out in the rain or thin it with water, Miller suggested.

Steel can flash rust within 30 minutes at 50 percent humidity, according to Miller. Higher humidity can speed up this reaction, he said.

The mere application of body filler over a substrate won’t stop rust, Miller said. Fillers might contain corrosion resistance and slow the process, “but they’re not gonna stop it,” he said. Put filler on rust, and “(the rust) may continue to grow,” he said.

In addition, a crack in the filler might permit another path for moisture to work its way towards the car, according to Miller.

Miller offered multiple examples of ways a shop might inadvertently allow flash rust to sneak onto the vehicle. A technician might prep the vehicle and go to lunch, leaving the substrate open to oxidation. The car might be left out over a weekend. It might leave the body department without rust but sit too long before the paint team addresses it. Perhaps a repairer must switch to another car after completing metalwork on the first vehicle.

“Resand the metal thoroughly,” Miller said. Reclean it, then apply filler, he said.

He also suggested using a pad like 3M’s Scotch-Brite to scrub off flash-rust.

“Micro-rust” might also explain why a vehicle which first shed peeling filler but later saw identical filler stick fine once the tech resanded and reapplied it, according to Miller. The tech might have left the vehicle exposed too long on their first try.

“Just cause you can’t see it doesn’t mean it’s not there,” Miller said of rust.

The shop might also have failed to protect metal exposed by their own repairs.

Miller at one point showed an image of a situation in which a repairer “ripped holes in the metal,” possibly with a stud gun or through a drill-and-snatch-bar process, and left and left filler oozing through. Regardless of the cause, the exposed bare metal creates another area with the potential for rust to get under the filler, Miller said.

A repairer who creates a hole with a stud gun needs to weld up the opening and grind it down, Miller said. Any welding also needs the inside surface prepped, he said.

The moisture to create rust might arise from sources beyond the typical humidity in the air, according to the webinar.

In at least one case, it might be visible to the eye: the condensation repairers observe in the morning, according to Miller. He noted that as a bead of water dries, it shrinks into a smaller droplet — and sometimes 3M can see how those individual droplets spaced apart within the filler.

The oils from one’s hands might also be to blame for rust, according to Miller. (He said restorers who touch a car after stripping or sandblasting a surface might notice this condition.)

Finally, a body technician might be inadvertently hosing down their work without even realizing it.

While a paint shop might carry equipment to keep its air dry, the body side might lack such technology and blow off panels with “wet air,” 3M senior technical engineer Shawn Ryan pointed out on the webinar. The system might separate oil and water but not actually dry the air, he said.

If a technician blows off a panel with wet air, they might produce the same damage as letting the surface sit too long, Ryan said. Shops might want to consult with their jobber or paint company rep about means to test compressed air moisture, he said. Your goal would be humidity of 10 percent or less, according to Ryan.

Even if you work somewhere arid, it’s possible for compressed air to carry too much humidity because of variables like the compressor or line distances, according to Ryan. Compression heats up air, but the gas cools down in the tank, which can lead to “excessive compressed air humidity,” he said.

3M will hold another live version of the webinar Tuesday at 9 p.m. CT. Register here.