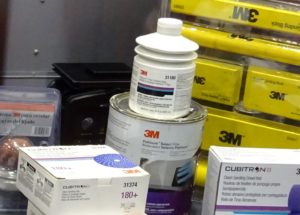 Repairers slathering a thick buildup of filler on a vehicle do so in error, a 3M representative explained of the company’s products during a webinar last month.

3M senior technical service engineer Ricky Miller showed two images of what not to do. One depicted a “neverending layer of filler” on a vehicle.

“That’s the ‘cave and pave’ or the ‘whack and pack’ scenario,” he said.

Another showed a penny placed for context next to the layer of filler on a substrate — the filler is so thick it comes up nearly to “Lincoln’s nose,” Miller said.

Repairers should apply “no more than a quarter-inch max,” Miller said.

This guidance didn’t mean each layer of filler could be a quarter-inch; rather, no part of the final product should exceed 0.25 inches of filler, according to Miller.

And that quarter-inch threshold should only arise as a factor occasionally during a collision repair, according to Miller. For example, one deeper spot that can’t be massaged out with a hammer and dolly.

“The overall repair is not a quarter-inch thick from edge to edge,” Miller said.

Miller said that this thought process even applied to restoration work involving large skim-coated areas. “Even that is not really thick over the entire panel,” he said.

Glazes should never exceed an eighth of an inch, Miller said, calling this “still pretty thick.”

Miller said repairers too liberal with their filler during the application process itself can cause pinholes from air entrapment. This will take the form of a cluster, or perhaps a line if one is working on a large area like skim-coating a bedside.

Shops will want to press out a thin layer of filler on a mixing board, according to Miller. This increases work time by slowing the exothermic reaction and helps release air, he said.

Do a “tight coat,” and build up filler on the vehicle with multiple wet-on-wet passes, Miller advised. On each layer, flatten spreader trails as much as possible, he said.

A filler application of multiple thin layers will set up in about the same amount of time as one thick layer, he said.

But a “whole blob” of filler slapped on in a “cave and pave” effort exposes the repairer to “big pinholes,” according to Miller.

Using multiple wet-on-wet layers might avoid pinholes entirely, Miller said. “It may be a ‘one application and done,'” he said.

Shops also shouldn’t get too generous — or too stingy — with the hardener they add to filler, according to Miller.

A common misconception holds that repairers should cut back on hardener when it’s hot out and double or triple up on the substance if temperatures are cold.

“That’s not recommended,” Miller said. You wouldn’t add extra hardener to your primer or clearcoat when it’s cold out, he pointed out.

“Filler is very sensitive to under- and over-catalyzation,” he said.

Instead, rely on temperature to achieve the desired result, Miller said. To speed up the process, use a device like an infrared heater, he said. Or just multitask: If the weather’s cold, complete your application and go work on something else while you wait, Miller suggested.

“It will kick,” Miller said. “You just gotta give it more time.”

Doubling up on hardener when it’s cold is “the worst thing you could do,” he said.

Honor the 50:1 ratio, Miller advised. He said in a “perfect world,” you’d weigh the two substances every time to ensure the proper mix. He said automated mixing systems also exist.

However, even the concept of a line of hardener keying off of the diameter of a puddle of filler will work (here’s a 3M example with a 3-inch puddle), according to Miller.

Fillers and glazes are robust enough to handle a little imprecision on the ratio, according to Miller. The real issue involves when repairers actively try to add or subtract excessive amounts, he indicated.

Featured image: 3M warned in a May 2020 webinar against adding body filler that exceeds 0.25 inches at any point. Glazes should not exceed an eighth of an inch, the company said. (John Huetter/Repairer Driven News)