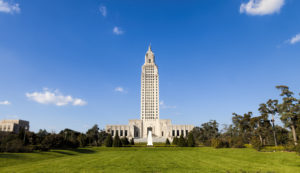 A bill sent to Democratic Louisiana Gov. John Bel Edwards on Monday adds some conditions for a third-party right of action against an auto insurer but also significantly strips away the victim’s ability to sue the at-fault driver’s carrier under other circumstances.

Senate Bill 418, the “Omnibus Premium Reduction Act of 2020,” eliminates the private right of action for an injured party (or heirs) to sue an insurer so long as the at-fault policyholder is also named in the lawsuit.

The House approved a joint committee report 66-31 on Monday, and the Senate did the same 28-10.

Currently, Louisiana Revised Statutes 22:1269(B)(1) for a “Liability policy” holds: “The injured person or his survivors or heirs mentioned in Subsection A of this Section, at their option, shall have a right of direct action against the insurer within the terms and limits of the policy; and, such action may be brought against the insurer alone, or against both the insured and insurer jointly and in solido, in the parish in which the accident or injury occurred or in the parish in which an action could be brought against either the insured or the insurer under the general rules of venue prescribed by Code of Civil Procedure Art. 42 only.” It goes on to state that the right to sue the insurer alone can only be done under certain conditions, such as the at-fault policyholder’s insolvency or death.

SB 418 would throw out all of that language except the right to sue an insurer solo under specific conditions.

Louisiana Senate communications officer Morgan Robertson confirmed in an email Thursday that the liability policies referenced here “does affect the law relative to motor vehicle property damage liability. It changes the way a right of direct action (i.e., an action directly against the insurer) can be handled.”

But as noted above, the bill does expand the circumstances under which an insurer could be sued by itself.

SB 418 permits third-party lawsuits against insurers “When the tortfeasor’s liability insurer has reserved the right to dispute whether the policy at issue provides coverage for some or all of the claims asserted in the action, other than limits of coverage provided by the policy.”

Third-party claimants also could sue carriers if “the tortfeasor’s liability insurer has denied coverage to the tortfeasor for some or all of the claims asserted in the action.”

The bill also OKs lawsuits “pursuant to an uninsured or underinsured policy.” The current law only mentions an “uninsured motorist carrier.”

If none of the approved conditions are met, the bill makes very clear: A third-party claimant can’t sue the carrier. In fact, the law specifically directs the claimant to sue the liability policyholder.

“When the circumstances enumerated in Paragraph (1) of this Subsection do not apply, neither the injured person nor the survivors or heirs mentioned in Subsection A of this Section shall have a right of direct action against the insurer,” a new RS 22:1269(B)(3) passage added by HR 418 states. “The injured person or his survivor or heirs shall bring an action against the insured, wherein a court of competent jurisdiction may render a finding (of liability) and damages against the insured. Nothing contained in this Section shall be construed to affect the insured’s right to enforce the provisions of the policy or contract against insurer.”

The bill also lets insurers avoid third-party direct actions by writing prohibitions on them into the policies. Under the current RS 22:1269(B)(2), such a preemptive strike by a carrier won’t work:

This right of direct action shall exist whether or not the policy of insurance sued upon was written or delivered in the state of Louisiana and whether or not such policy contains a provision forbidding such direct action, provided the accident or injury occurred within the state of Louisiana.  Nothing contained in this Section shall be construed to affect the provisions of the policy or contract if such provisions are not in violation of the laws of this state.

The new bill throws out that protection entirely — and should the third-party claimant manage to sue the carrier, the insurer’s name will be left out of the “caption” of the case. This would seem to make it more difficult to track which insurers are being accused of improper behavior.

This direct action may be brought in the parish in which the accident or injury occurred or in the parish in which an action could be brought against the insured under the general rules of venue prescribed by Code of Civil Procedure Article 42 only. The caption of any suit brought pursuant to the provisions of this Section shall not include the name of the insurer. Nothing contained in this Section shall be construed to affect the provisions of the policy or contract if such provisions are not in violation of the laws of this state.

The bill also dials back the ban on jury trials, permitting them for cases involving less money. Current Louisiana law generally only permits jury trials on cases above $50,000.

SB 418 would permit jury trials all cases for more than $10,000 brought under Civil Code Book III, Title V, Chapter 3 (a legislative report said this refers to tort cases). It’d generally allow jury trials on all other lawsuits involving more than $35,000.

As of Thursday evening, Edwards did not yet appear to have taken action on the bill.

Be heard: Contact information for Edwards can be found here.

The Louisiana Capitol is shown. (Meinzahn/iStock)