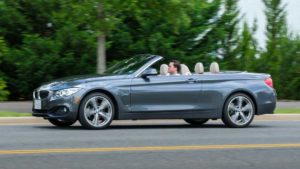 This doesn’t mean that the roof and associated safety-cage structure like roof rails are irrelevant to occupant protection. Quite the opposite, according to an April HLDI study:

The absence of a fixed roof makes it a challenge to design a convertible for safety. The roof helps to maintain the rigidity of the structure around the occupant compartment and keep the compartment intact in a serious crash. The main structures of convertibles need to be strengthened to compensate for the support that is lost in removing the roof.

The Insurance Institute for Highway Safety also said Tuesday that data exists proving “that for conventional cars a stronger roof reduces the risk of a serious or fatal injury as well as the likelihood of ejection in the event of a rollover crash. IIHS added a roof-strength evaluation to its crashworthiness testing program in 2009, making a good rating a requirement for the TOP SAFETY PICK award a year later.

“Both stretched-fabric and retractable-hardtop convertibles are exempt from NHTSA’s current roof-crush resistance requirements. However, some manufacturers have voluntarily strengthened the A-pillars on either side of the windshield and installed roll bars to provide additional protection in rollover crashes.”

Instead, the interesting findings released in April and this week suggest some other variable is at play. It might be something related to the vehicle, such as structural design changes to compensate for the roof’s absence or the heavier weights convertibles tend to carry. Or the driver themselves might be a factor.

“The lower results for convertibles compared with their corresponding coupes may be due to the convertibles’ higher curb weight, the socioeconomic differences in the drivers, or how the vehicles are driven,” HLDI wrote in April. “Hardtop convertibles had lower injury rates and slightly higher collision claim frequencies than soft-tops. The types of vehicles in the groups may contribute to this difference, as BMW vehicles dominated the hardtop group and Chevrolet and Ford vehicles dominated the soft-top group. No information was available on whether the convertible’s top was open or closed at the time of the crash, so the effect of a lowered roof on injuries and crash risk is unknown.”

HLDI also postulated in April that traveling with a top down might lead drivers to take less risks and permit them to see more of their surroundings. The June study did find convertible drivers were more likely to wear seat belts and less likely to be speeding, while they were more likely to have a blood-alcohol content of 0.08. (The IIHS said these “differences were too small to suggest a big variation in driver behavior,” though.)

In the April study, HLDI compared claims data for 2000-18 model-year vehicles available in both a convertible and traditional format. The research examined losses between the vehicle’s debut and October 2018 when studying injuries and between the debut and December 2018 for collision frequency. It found the convertibles carried statistically significant lower injury and collision frequencies on the whole, though it wasn’t able to break this data down by point of impact.

“Teoh found that convertibles were involved in 6 percent fewer police-reported crashes per miles traveled than their conventional counterparts,” the IIHS wrote. “Driver death rates were 11 percent lower. However, the likelihood that the driver was ejected from the vehicle in the event of a fatal crash was higher for convertibles than conventional versions.”

“These findings don’t suggest that convertibles offer better protection for their occupants than other cars, but they do indicate there’s no statistical basis for concerns that the lack of a permanent roof makes them more dangerous,” Teoh said in a statement.

The IIHS doesn’t crash-test convertibles as often as it tests conventional vehicles.

“When IIHS evaluated a group of midsize convertibles in 2007, most of the 10 models earned good or acceptable ratings in the front and side crash tests, though eight had poor or marginal head restraints,” the organization wrote. “Since then, convertibles have remained a low priority for the testing program due to their small sales volumes.”

But just for the heck of it, here’s an interesting example of when the IIHS did test a convertible and regular version of the same car carrying the same number of doors: a 2010 two-door Mustang.

According to the IIHS, the regular 2010 Mustang coupe scored a good on the moderate-overlap front crash test and in terms of head restraints and seats. It got an “acceptable” on the side-impact test.

“In response, Ford modified the convertible’s front structure and the doors to improve occupant protection in frontal offset crashes beginning with cars manufactured after December 2009 (note: information about when a specific vehicle was manufactured is on the certification label typically affixed to the car on or near the driver door),” the IIHS wrote.

“In the second test of a car built after the structural modifications were in place, the head/neck and overall ratings improved to good.”

The 2010 convertible gets “good” scores on the moderate-overlap and side crash tests and on head restraints and seats testing.