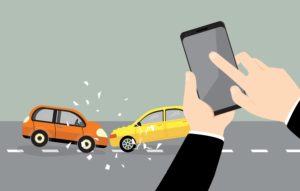 Insurers recently produced their 3 millionth photo estimate since 2018, according to CCC.

“The company also reports that the percentage of claims processed through CCC® Quick Estimate, the company’s mobile photo estimating solution, has more than doubled from January to April of 2020 as carriers are accelerating use and adoption of digital tools in response to COVID-19,” CCC wrote May 28.

“Use of AI-supported claims has accelerated from steady adoption by industry leaders to a massive increase in use and adoption by the industry at large,” CCC product management Senior Vice President Jason Verlen said in a statement. “Our data, and the conversations we are having with customers, strongly suggests that this point in time will mark a digital revolution in claims. We’re seeing every industry embracing new technologies, rethinking how they work, and focusing on personalizing experiences for their customers. The insurance industry is no different.”

The CCC data came two days after an AM Best webinar featuring Liberty Mutual, USAA and LexisNexis representatives showed a bullishness on virtual claims. Two of the participants also mentioned an increased use of virtual tools by auto body shops.

Brower noted that the insurance industry tended to want “100 percent sure,” but it was “pretty interesting” to see what happened after COVID-19 “pulled the net out” from under it.

“We are definitely learning,” Peasley said. He called it amazing how much Liberty Mutual changed in the few months before the May 26 webinar and estimated advancements had been pulled forward “several years.” 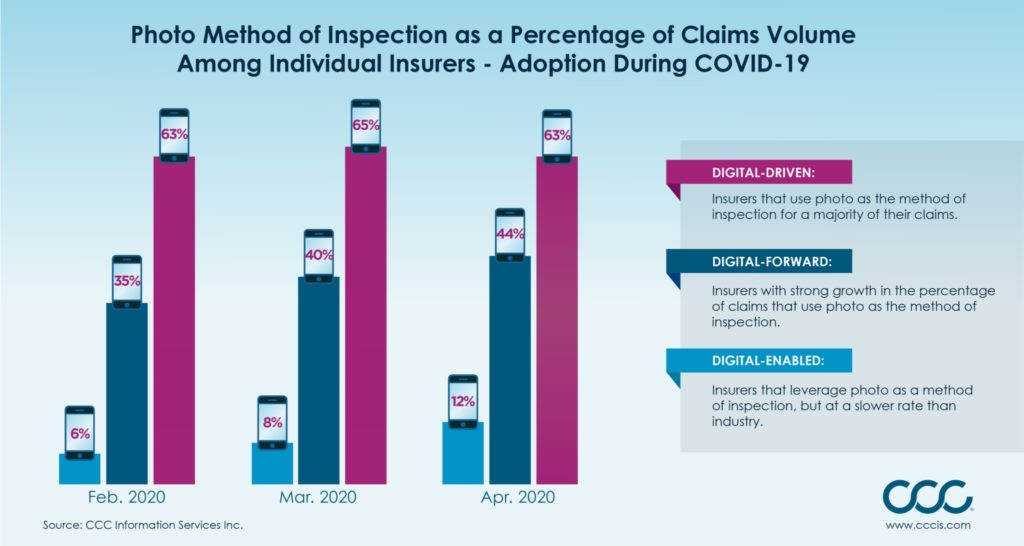 Brower said LexisNexis a year ago found 95 percent of insurance executives surveyed were using virtual tools or moving that way. Most had something in place prior to the pandemic, but some might not have made the move yet.

2020 posed a tipping point for claims, and insurers won’t revert to their old processes, he predicted. “I think that will change,” he said.

The industry gained more confidence in virtual claims handling — and customers “almost had to” use such software for other aspects of their lives amid restaurant and retail closures, Brower aid.

Nationally and globally, humans have become more comfortable with technology to accomplish everyday activities, he said.

Peasley said Liberty Mutual traditionally conducted estimates with “great accuracy and sophistication,” and the big question for virtual claims was: “Can we be as accurate?”

He said Liberty Mutual was in the “very early stages of learning.” He said virtual represented maintaining or improving accuracy but with improved efficiency and customer experiences.

Brower called accuracy a “valid concern,” given the use of photos versus the ability to touch a vehicle. He said LexisNexis was monitoring the issue and felt it would be interesting to see severity trends between March and May.

However, early results for March found severity trends largely unchanged from previous months, according to Brower. Granted, that month only involved two weeks of virtual, but the data seemed steady, he said.

“I think April will be even more telling,” Brower said. He predicted claims would be handled faster and accuracy would be in line with before.

Brower said that if a customer uses a digital format, “they expect to get a quick response. Digital is about speed.” (At another point in the webinar, he noted how when he started in the business, he would tell a customer he would see their car in a week. “‘That’s great,'” the customer would say.)

Warner said customers have “three salient questions”: How long will the repair take, how much they’ll pay out of pocket, and whether the insurer cares about them.

Virtual claims lets USAA employees “get to decisions more quickly” and aid policyholders in “making the right choice,” whether that’s how, when or where to get a vehicle repaired, she said.

Warner said virtual enables prompt decision making, which improved USAA cycle time. She said insurers at scale will soon be discussing cycle time in seconds and hours instead of days and weeks.

“Industry use of photos for method of inspection has been growing and insurers are seeing benefit to both cycle time and customer satisfaction,” CCC director and industry analyst Susanna Gotsch said in a statement. “The recent spike is likely indicative of a new normal as we’re seeing greater use of digital by carriers that have been in market and new insurers coming online with digital solutions.”

Asked if customer demand existed for virtual claims, Brower said LexisNexis’ claims study found younger consumers supportive but baby boomers more mixed. But he thought attitudes had changed due to the pandemic and predicted more digital customers, even from the boomer demographic.

Insurers won’t go backwards, and they’ll automate even more of the process, Brower said, offering automation of first notice of loss and the payment process as examples.

Still, Peasley emphasized that not everything would be virtual. The customer’s preferred mode of interaction would demand a seamless connection between all processes, such as phone calls and text messages, he said.

Warner also pointed out the need to accommodate other customer behavior. People don’t run errands during their workday, she said, and customers asked to take photos of their cars and homes are “doing it when they can” — typically nights and weekends.

Customers might use the technology in ways an insurer wasn’t equipped to handle, she said.

“That is where the transformation truly comes” in touchless claims, she said. The insurer must act when a customer submits photos and videos at midnight, she said, implying software to read and review data might be a solution. Existing claims workers should be put on more complex tasks, she said.

Asked where to find virtual claims talent, Warner said, “We’ve got it right now.” As company leaders, it was their job to grow employees’ skills, and the shift to virtual meant those staffers could switch from data entry to making decisions.

Asked if virtual claims could apply to commercial auto and property as well as personal lines, Brower said LexisNexis sees that growing. He said he’s been interacting with more commercial companies and predicted this space would be the next frontier.

“Is 2020 the Tipping Point for Virtual Claims Handling?”

LexisNexis auto claims Vice President Bill Brower on May 26, 2020, predicted 2020 to be a tipping point on virtual claims. (BlindTurtle/iStock)

CCC in May 2020 reported the COVID-19 response has produced a record expansion rate “exceeding double-digit growth” for photo estimates and “AI-supported claims” since Jan. 1, 2020. (Provided by CCC)