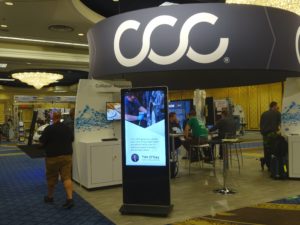 State Farm has dropped its platform-agnostic policy and will require Select Service collision repairers to use CCC by next spring, calling it a matter of customer service and streamlining.

“While State Farm has historically allowed repairers in the Select Service network to use any of the three major estimating systems, this approach can cause inconsistencies and duplication,” the insurer wrote to direct repair program auto body shops in a Monday email provided to Repairer Driven News.

State Farm is by no means unique in this regard. Other insurers and certifying automakers have required partner collision repairers to use specific estimating platforms as well.

A separate question found 51.2 percent of Audatex users, 35 percent of Mitchell customers and 31.1 percent of shops with CCC declaring an insurer mandate their primary reason for buying the software.

CCC was the only estimating service for which an insurer mandate wasn’t the No. 1 motivator behind purchasing decisions. 35.9 percent of shops cited CCC’s quality as their primary reason for using the platform.

Still, the State Farm change is interesting given what we’re told has been the insurer’s long-running and lauded position of platform neutrality.

“To streamline our processes and create a more consistent customer experience, we have selected CCC® as a single solution,” State Farm explained to DRP shops Monday. “CCC offers an end to end digital solution that aligns with our long-term strategy for continuing to improve how we meet customer needs.”

The State Farm DRP message provided to Repairer Driven News was directed at a shop who was already using one piece of CCC estimating software, and State Farm said the company should be fine as is. However the insurer asked to be notified if the repairer wasn’t using the CCC Perform package containing CCC Advisor and CCC UpdatePlus with rental integration.

“All Select Service repairers will be required to use the CCC Perform package for all estimates uploaded to State Farm no later than April 1, 2021,” State Farm wrote. “This requirement is in alignment with provision 3.i. of the Select Service Agreement.” (Emphasis State Farm’s.)

That gives shops three months to convert to CCC if they weren’t already using it.

CCC noted most Select Service shops already had experience with its software, an assessment supported by the market share data collected by Collision Advice and CRASH Network.

“CCC has worked with State Farm for more than 25 years and has worked with most of the repair facilities within their network for many years as well,” CCC spokeswoman Michelle Hellyar wrote in an email Tuesday.

But she said the transition shouldn’t be difficult for CCC newcomers.

“Repair facilities new to CCC ONE will experience a simple onboarding and implementation process, ensuring they can get value from their new technology quickly,” she wrote. “By being on CCC ONE and the CCC network, repair facilities can support the State Farm program and other DRP programs in which they participate.

“We suggest shops begin the onboarding process soon to ensure they are ready and proficient as a participant on the State Farm program.”

The change also raises the question of which platform the insurer will use internally going forward. We’ve been told the carrier had used Audatex, but the email suggests an affinity for CCC.

“We have nothing to share at this time,” State Farm public affairs specialist Gina Morss-Fischer wrote in an email Tuesday. The single answer also encompassed a question about how State Farm adjusters would interact with non-CCC estimates from non-DRP auto body shops.

Mitchell also declined to comment when asked about State Farm’s change from being estimating service-neutral to a specific brand.

State Farm indicated that it might use CCC for total losses too.

“You will continue to utilize the Autosource website to complete vehicle inspection reports on possible total loss vehicles,” State Farm wrote. “An additional communication will be provided in the future prior to moving total loss process to CCC workflows.”

As noted above, many Select Service shops were already running CCC anyway. But the short timeframe for the rest to adopt CCC raises the question of whether any of the remaining facilities would still be under contract to an estimating service they no longer need post April 1, 2021.

State Farm’s “nothing to share” response seen above also applied to an RDN inquiry about the issue of contractual overlap.

A 2019 “Who Pays for What?” survey found insurer mandates were the primary driver for shops buying Audatex and Mitchell. (Provided by Collision Advice and CRASH Network)

A 2019 “Who Pays for What?” survey question found CCC with a significant market penetration among responding shops. (Provided by Collision Advice and CRASH Network)