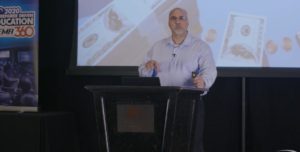 Auto body shops have gotten “desensitized” by minor quality issues that naturally arise over the course of a repair, a Sherwin-Williams lean educator and former shop owner said last year.

They’re tolerated because they can’t be measured, “but they’re real,” Rush said.

In fact, they can add up to six figures of potential revenue vanishing unrealized, he told audiences in a virtual Repairer Driven Education course SCRS released in November 2020. Rush’s “Why Ignoring QUALITY CONTROL Will Cost You Profits and Sales” and more than a dozen other virtual RDE sessions can still be subscribed to and replayed through Aug. 31, 2021.

Rush advised that a shop make an effort to start measuring how long staff spend fixing errors, tracking a subcategory of cycle time focused on error correction. Nip them in the bud and have a more profitable shop, he suggested.

Time is money on a production floor, Rush said. Every minute, an auto body shop produces something generating revenue, “or we don’t,” he said.

Rush advised shops to think of the key performance indicator “sales per labor hour sold.” Repairers would calculate this metric by dividing their annual revenue by their facility’s annual labor hours, he said.

“Everybody’s will be different,” he said.

For example, a repairer doing $2.5 million in sales and recording 16,000 labor hours on estimates over the course of a year averages $156.25 per labor hour sold, according to one of Rush’s slides.

Now, a repairer can calculate the cost of “in-process failures” at their shop, he said. 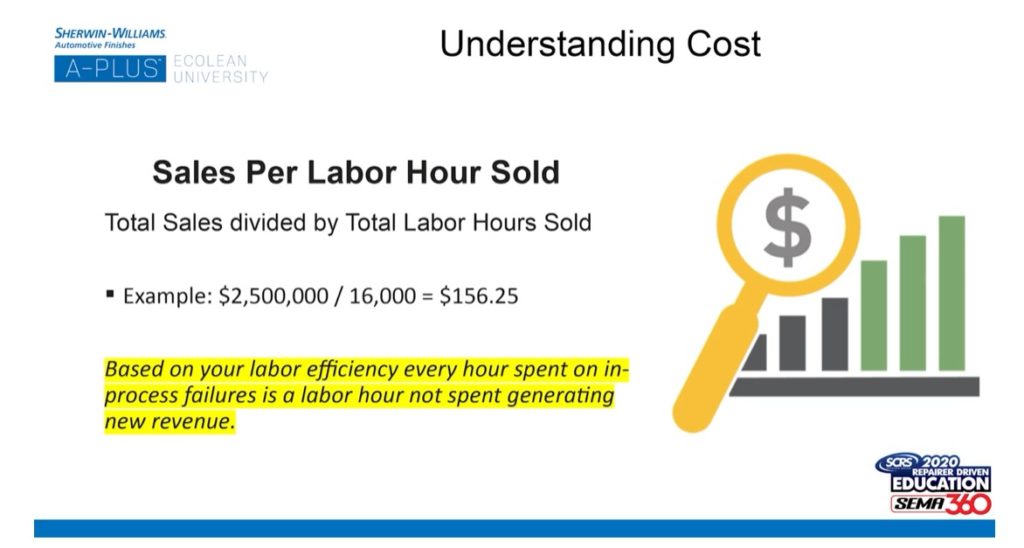 It’s kind of like the concept of storage. A vehicle sitting around in a bay until a customer picks it up means a repairer can’t use the space for to repair a new vehicle for a new customer. That missed opportunity means missing out on revenue, and so repairers might charge storage to compensate.

In Rush’s example, it’s the shop itself responsible for the lost production. Every hour production staff wastes fixing something that wasn’t executed right the first time — reversals, reworks, comebacks — means the hypothetical shop has passed up $156.25 in new revenue.

A technician who’s reworking something isn’t producing new revenue, according to Rush. “We know that,” he said.

Rush said it has been estimated that errors might constrain a shop’s revenue by 20 percent. A shop doing $200,000 a month in sales could be a $240,000-a-month facility, he said. Even reclaiming half of that wasted time would be a win, he said. 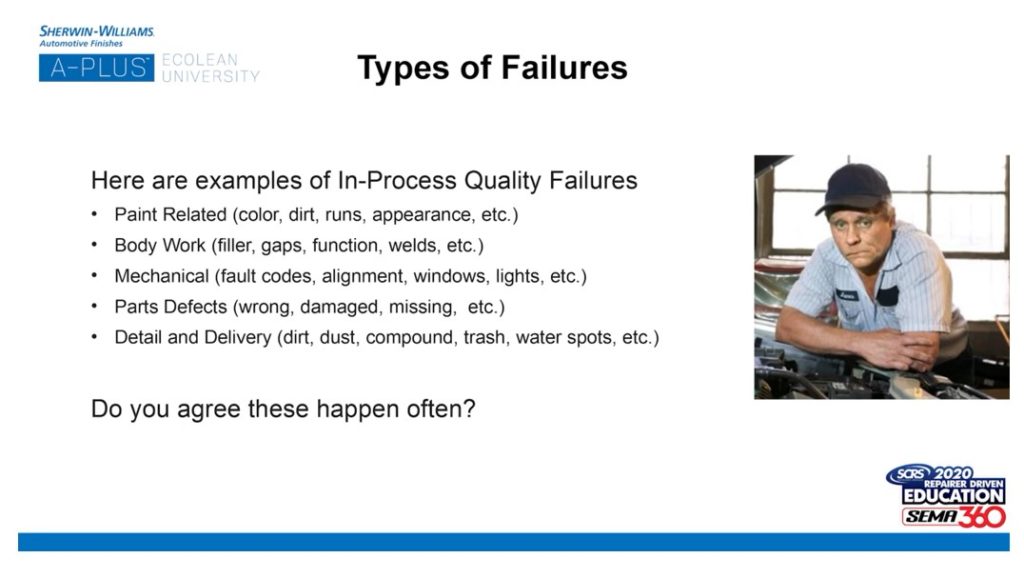 “I know we have some naysayers,” Rush said.

But he cited issues like paint defects, runs, body filler work, gaps, body lines, nonfunctioning components and welds that might arise. “I know for a fact” that collision repair is “riddled” with parts issues that need to be corrected, such as incorrect, missing or damaged parts ordered. (He estimated parts represent nearly 80 percent of production floor issues.) And “I know we have detail issues,” he said.

And don’t forget customer returns. The 2020 CCC “Crash Course” indicates that around 10 percent of all DRP repairs for the year ending Sept. 30, 2019, saw the customer return the vehicle for some reason. For initial repairs costing more than $10,000, the return rate rises to about 1 out of every 4 vehicles.

Rush’s presentation used a hypothetical shop doing $250,000 in monthly sales with eight technicians — six metal techs and two painters — who each produce about $30,000 a month.

Each technician’s major and minor mistake work out to 1.5 errors a day — “not a lot,” Rush said. Together, that works out to all eight collectively averaging 12 errors. 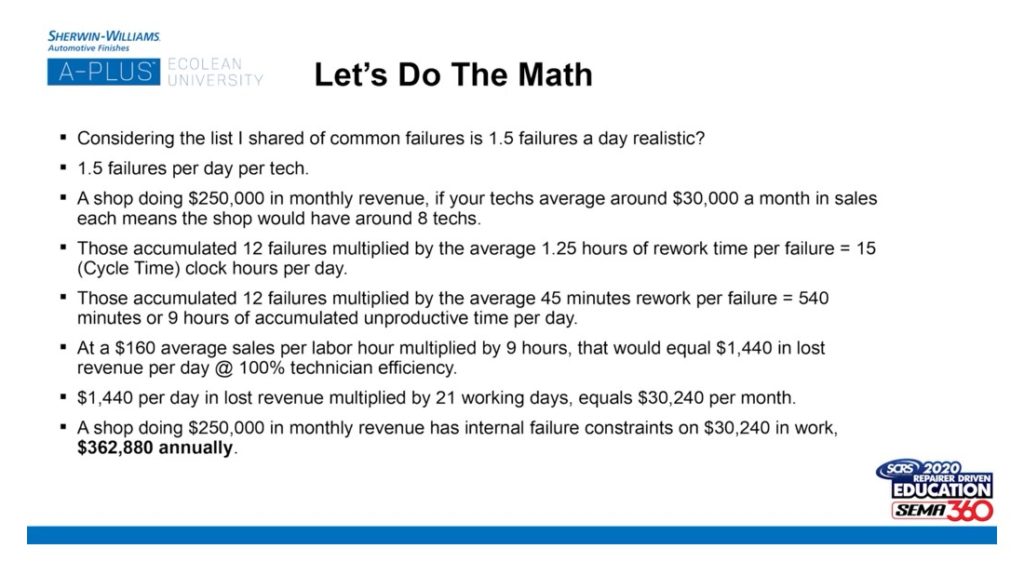 Each one averages 45 minutes of actual touch time to fix, he said. This time takes into account tiny mistakes that might take a mere 10 minutes of work and others that demand disassembly, re-repairs and re-refinishing, he said.

Twelve errors at 45 minutes a pop means “nine hours of corrective action” each day,” Rush said. Using an average of $160 cost per per labor hour sold, the shop is missing out on $1,440 in new revenue daily.  Multiply that by 21 working days per month, and the shop is passing up $30,240 in additional revenue each month — and $362,880 annually.

Rush also alerted repairers to the KPI of “internal cycle time for defects,” he said. Once an issue is found on the shop floor, “the clock starts.” It doesn’t stop until the problem is fixed. (At which point it should be documented, he said. Error trends should be tracked and addressed, according to Rush.)

This statistic might produce a reaction of “‘There’s no way,'” he said. But “it’s real,” he said. Certainly, some errors might only take five minutes, such as recognizing and correcting a missing clip, he said.

But some defects might remain overnight and not be addressed until the next morning, according to Rush. “The cycle time ran all night,” he said. So the average is 1.25 hours, he said.

He said the Harvard Business Review found that across all businesses, correcting a mistake averages 2 hours. (His source was unclear, but a 2014 HBR article from CEB (now part of Gartner) contributors reports their company’s research produced such a statistic.)

“Why Ignoring QUALITY CONTROL Will Cost You Profits and Sales” (Replayable through Aug. 31, 2021)