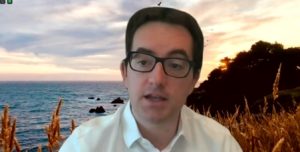 Two are questions of semantics, Industry Relations Committee Co-Chairman Jonathan Chase explained during an discussion of ADAS and trust at the virtual CIC Jan. 20. The third involved the necessity of inspection procedures, he said.

The discussion gives shops — and OEMs — a sense of areas that might require additional consumer and insurer education to avoid headaches for the repairer and consumer.

For at the end of the day, the shop must still follow OEM repair procedures or risk liability, and the customer is the one actually on the hook for the shop’s bill. An insurer’s hesitation to reimburse the customer for certain operations doesn’t alter these realities.

The first issue: “What is a collision?” said Chase, the National General director of claims process and centralized service. If airbags deploy, a vehicle needs a scan, he said. But if a motorist hits a trash can and scuffs the bumper nowhere near a sensor, Chase’s staff finds it hard to understand why a scan is necessary, he said.

He said he felt insurers would have to work with automakers and information providers to figure out how to “define collision in the spectrum of all accidents.”

Some OEMs might have already helped out the industry on this front. For example, Subaru in 2020 made it clear in a position statement that a collision meant “damage that exceeds minor outer body panel cosmetic distortion” — a clarification lauded by Collision Hub at another recent CIC. Honda has carried a similar definition in a scanning position statement for years. Other automakers might have provided similar clarifications in positions or other OEM repair instructions; you’ll have to check.

“We know when it’s required, its pretty much slam-dunk,” he continued. “We need to pay for it. It’s not optional. Let’s go do it.”

But if an operation is “recommended” — particularly on a lower-severity claim — “people ask a lot of questions about that stuff,” he said.

“And they’re not trying to get out of it,” he continued. They want to ensure the information justifying it would be “valid,” he said.

Defining “recommended” would be something he thought insurers and shops would need to work with OEMs on, he said.

We asked Jan. 20 why the word “recommended” was a problem. Why wouldn’t a recommendation from the company that built the car and tested the repair procedures be followed?

“I think that’s a great call-out for you to be skeptical of … on nastier hits” like one with an airbag deployment, he said. “If it’s recommended, we should do it.”

He said the struggle was whether this applied to every accident. Would the trash can hit resulting in a 0.5-hour dent require a steering column inspection. “I think that we would question why we pay for it,” he said.

Chase said he told staff “that if you spend insurance money the way you would your own,” a good decision would ensue. “I want them to ask: Would you want this for your car?”

He said sometimes, this might result in them asking, “‘Do I really need this?'”

Insurers need to understand what is behind the spirit of an OEM recommendation and work with an OEM to know if it applies to every vehicle strike or just instances of a “significant impact,” according to Chase.

Then, the question becomes, “What does significant mean?” according to Chase.

A need exists for definitions, he said.

Collision industry experts have described the term “recommended” as synonymous with “required.”

“Those are not ‘recommendations,’” then-I-CAR industry technical relations director Jason Bartanen said of OEM procedures in 2017. “Those are service specifications.”

Collision Advice CEO Mike Anderson observed in 2018 that the term “recommended” might reflect the culture of some Asian OEMs.

To say something was required would be considered “demeaning” and “rude”; you would defer to the “politest” way of saying something, according to Anderson. For example, in Japan, a recommendation by one’s boss or father would be a command, he said then.

Erica Eversman, an attorney specializing in collision repair, in 2017 warned shops that the idea that an OEM “recommendation” is merely a suggestion is incorrect.

“Consider it a requirement whether they’ve used that word or not,” Eversman (Vehicle Information Services) said during an August 2017  “Repair University Live.”

OEMs call it a recommendation for “legal reasons,” Eversman said then. In a May 2017 interview with us, she explained that it has to do with the Magnusson-Moss Warranty Act; calling them requirements would force the OEMs into various warranty obligations under the law.

“When you read it (‘recommendation’) … you should read that as ‘requirement,’” she said.

Finally, there’s a matter of inspections. Chase said National General had recently seen a significant increase in shops performing inspections. (Which unfortunately might reflect shops having overlooked required OEM repair procedures in the past and only now playing catch-up.)

As he put it: If someone hit that trash can, were all those inspections required? How would it be documented? “What do we need to look at?”

Chase said the notion of “‘Do no harm to a car'” can also be a stumbling block. The fewer things altered during a repair “is generally for the better,” he said, calling this a “bias I have.”

In an instance of the trash can-driveway impact, he said his staff would wonder if removing seats and inspecting the steering column would be the right move for the vehicle. They’d ask if it was in the spirit of what the OEM would like to see happen, he said.

He said this would be something that needs collaboration on what documentation would smooth the process between shops and insurers.

Shops and insurers curious about inspections and circumstances triggering them have a new opportunity to get answers for one OEM. Subaru covered the topic of inspections in a virtual Society of Collision Repair Specialists OEM Collision Repair Technology Summit course released in November 2020. That video class and more than a dozen other classes from the virtual Repairer Driven Education series will be available for replay through Aug. 31, 2021.