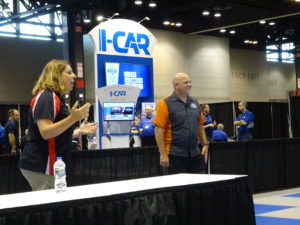 What does I-CAR really say? Probably not what some of you think, based on a Collision Hub live event at NACE 2017.

Host Kristen Felder said some in the collision repair industry might have misconceptions about I-CAR’s positions on various auto body technical procedures, perhaps due to taking an I-CAR class in the 1990s but failing to recognize how I-CAR’s teachings have evolved alongside automotive technology since then.

First and likely foremost: I-CAR repeatedly has stated at least as far back as 2013 that OEM repair procedures take precedence over anything “I-CAR says” — or that you think “I-CAR says.”

“Those are not ‘recommendations,'” Bartanen said July 27. “Those are service specifications.”

Those OEM procedures “should not be adjusted,” he said.

I-CAR’s Uniform Procedures for Repair Procedures were meant to “complement” the OEM procedures — but not supercede them, according to Bartanen.

Felder explained that back when I-CAR started to produce the uniform repair procedures, OEMs weren’t supporting the collision repair industry they way they do today. “We really did feel abandoned,” she said, and I-CAR filled that information gap. Today, virtually all OEMs give collision repairers access to their OEM repair procedures. (And Hyundai, a rare exception, plans to do so soon.)

Bartanen said I-CAR’s stance is that shops should first follow OEM repair procedures. If those don’t exist, a repairer should look to OEM position statements or other documentation for guidance. If neither of those OEM options available, then use an I-CAR “published best practice,” he said. (Even then, there’s still a chance to tap an OEM for advice using the “Ask I-CAR?” service as a middleman.)

1. First and foremost, always refer to the body repair manual for the make, model, year, and part in question.

2. If the information doesn’t exist, the next step would be to refer to any OEM-specific published position statement or general procedure.

3. If there is no vehicle-specific repair information and no OEM published position statement or general procedure, the last step would be to look for I-CAR published best practices. Published I-CAR best practices are inter-industry developed and vetted guidelines. (Minor formatting edits.)

Felder noted that a shop must make sure to look up OEM repair procedures by year, make and model. A repair on a Camry might not translate to a Sienna. And even if a shop has recently consulted an OEM repair procedure for that particular model year, “still go back and take a look,” Bartanen said.

“They do change from time to time,” he said. Looking it up every time ensures you have a date and time stamp validating that you followed the right procedures at that time should the OEM’s position change, according to Bartanen.