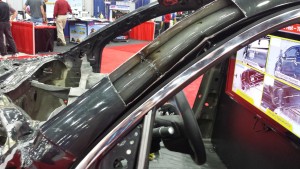 I-CAR last month declared its old general sectioning guidelines inappropriate for modern collision repair in virtually any circumstance, driving a stake through the heart of yet another “I-CAR says” misconception persisting in the industry.

Collision Hub CEO Kristen Felder and I-CAR industry technical relations director Jason Bartanen devoted a live NACE event July 27 to mythbusting those taking the educational organization’s name in vain. Despite I-CAR’s aggressive efforts to teach the industry how to properly repair modern vehicle technology, some out there — Felder gave the example of someone who took an I-CAR class years ago but hadn’t kept up with the times — continue to make incorrect “I-CAR says” assertions.

Felder, who has also spent time in the insurance industry, said insurers seem to “misunderstand the most” about general sectioning guidelines.

Bartanen said that I-CAR’s 1980 mild steel sectioning guidelines were “not applicable” for collision repair of modern vehicles. And even those guidelines carried a list of restrictions that would preclude the sectioning on modern vehicle anyway, he noted. In them, I-CAR warns against sectioning “collapse or crush zones;” “compound shapes or structures”; “hinge locations”; “holes larger than 3 mm”; “locations where vertical and horizontal panels meet”; “reinforcements”; “seat belt D-ring attachment points”; and “suspension, engine, and drivetrain mounting locations,” according to a slide at the event.

“You find me a place on a vehicle today” that meets that criteria where sectioning would be appropriate, Bartanen challenged the industry. He said he didn’t know if it was possible for any part to qualify. Felder attributed the industry’s continuing improper sectioning to a misconception about what parts are structural in a unibody vehicle — even a quarter or roof panel can be — and a misunderstanding that a particular part was “‘just steel.'”

There’s been years of developments in increasingly higher-strength but lighter steels than the 200ish-megapascal mild steel.

“General sectioning guidelines have never been tested on HSS/UHSS rich vehicles and I-CAR does not, currently, have any plans to do so,” I-CAR wrote in 2015.

Sectioning higher-strength steels can compromise the integrity of the light, strong parts and causes them to perform incorrectly — i.e., not protect the occupants — during a collision. Honda dramatically demonstrated this in 2015 when its crash testing showed how an incorrect sectioning of a 2014 Acura MDX ultra-high-strength-steel “door ring” reduced crash performance — while a factory MDX behaved as it was designed to.

Felder explained that vehicles now were designed to transfer energy around the occupants and minimize the intense G-forces created by a collision. Improperly monkeying around with those load paths, as Honda’s example demonstrates, puts lives at risk.

I-CAR’s guidance now is that if no OEM repair procedures exist, “do not section. Period,” Bartanen said, referencing an I-CAR slide.

“If there are no published sectioning procedures available from the vehicle maker, do not section,” I-CAR said in the slide. “The complete part should be replaced at factory seams, unless the OEM allows for partial part replacement at a factory seam.” “If there are no published procedures, don’t do it,” Bartanen said of sectioning.

This can be painful for an insurer or a shop. One might look at these rules and conclude, “‘If I do that, it’s going to total,'” Felder said. The response: “‘Yep.'”

Full-body sectioning, or “clipping,” originally permitted under the 1980s guidelines, should have long ago been rendered impossible by the restrictions contained in those guidelines, Bartanen said. I-CAR hasn’t even written anything about it since the 1990s (regarding a Pontiac Grand Am), and it’d already issued its warning against sectioning anything not permitted by OEM repair procedures, according to Bartanen. (Some OEMs even dumbed it down further for the industry by issuing position statements condemning clipping.) I-CAR has even purged all references to full-body sectioning from its documents.

And yet, the practice still continues.

After seeing a post on social media which showed a clipped Cadillac — “I’m not putting my family back in that car,” Bartanen said — and declared “I-CAR says” full-body sectioning was acceptable, the organization went on the offensive.

I-CAR called for opposition the practice at a recent repairability summit — which brings together insurers, shops, OEMs to set the course of the inter-industry educational organization.

“It was a pretty quick conversation,” Bartanen said.

“In addition to the information from I-CAR, no vehicle maker allows clipping as an approved repair method,” I-CAR wrote in July about its clipping opposition. “In fact, most vehicle makers have published warnings against performing full body sectioning on their vehicles.” Another I-CAR slide mentioned an increase in social media posts, and Felder said she’d increasingly started to see it on estimates insurers were providing shops. “It’s just an education issue,” she said.

Mocking a clueless repairer who argued “‘I’m a pretty good tech,'” or “‘I’m a real body man'” and therefore should be able to clip a car, Felder asked Bartanen if skill mattered at all.

Bartanen replied that the restrictions had nothing to do with skill. “Do not do full body sectioning,” he said.

“Full-Body Sectioning Should Not Be Done”

This improper butt weld to the A-pillar portion of a 2014 Acura MDX door ring was done by Honda to mimic similar improper sectioning done by a repairer on the passenger’s side. (John Huetter/Repairer Driven News)

I-CAR says its 1980 mild steel sectioning guidelines should not be used for modern collision repair. And even those carried a list of restrictions that would preclude the sectioning anyway. (John Huetter/Repairer Driven News; photo of I-CAR slide)

I-CAR had in the past implied clipping should not be done, but the practice continues. (John Huetter/Repairer Driven News; photo of I-CAR slide)