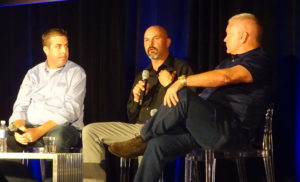 A former regional MSO owner at SEMA shared an account of his experience being sued over repair work, and fellow auto body professionals who missed the show have another chance to hear the powerful story with a video just released by SCRS.

SCRS this week posted a free video of the session, and Clark’s story can be seen around the 46:06 mark.

Prior to his leadership role at Assured Performance, Clark owned the seven-shop Collision Solutions for more than a decade before selling it to ABRA in 2012. He said today’s technology means repairers need discipline “a magnitude above what it was when I was in the industry.”

Clark said the lawsuit all started when his shop fixed a “very minor accident.” A taller vehicle backed into the customer’s car, which wasn’t even moving, and the collision pulled back the hood, upper tie bar and primary latch.

The shop replaced the upper tie bar, which for that vehicle was inclusive of the vertical support bearing the airbag sensor, he said. The shop received “a whopping 0.2” to disconnect and reconnect the sensor, Clark said.

Carrying four passengers and a dog, the repaired car became involved in a subsequent collision a few weeks later.

The airbags failed to deploy in that 80 mph crash, and the impact killed the dog and rendered two occupants paraplegic.

All of the other defendants were able to avoid the lawsuit — including the vehicle manufacturer, who proved it had made repair procedures available. Clark’s shop was left on the hook, exposed for failing to follow OEM repair procedures.

Clark on Thursday explained that the point of his story wasn’t the specific vehicle but “shops not referencing or securing the proper documentation” in general. For context, he cited the language in Toyota CRIB No. 123 as an example of OEM repair procedures similar to that in the case: Clark’s failure to follow OEM repair procedures wasn’t a conscious decision (unlike the shop in the John Eagle Collision case). Collusion Solutions was either unaware that the requirement existed or didn’t understand it, he said.

Clark also noted that “I was not asked to do anything wrong” by an insurer.

The legal process spanned five years and ultimately was settled by his insurer, who feared the outcome of a jury sympathetic to the unfortunate plaintiffs.

“It changed my life, folks,” Clark told the audience. For years, he had to live with wondering if his company truly was responsible for the horrible injuries.

“I turned into the hardest guy to work for that you could,” he said. “I was never satisfied. I was never paid enough. …  You’ll never get paid enough to go through what i went through.”

Clark said he “can only imagine” how the John Eagle technician responsible for incorrectly applying adhesive to the vehicle felt, describing his own employees as asking, “‘Boss, did I do anything wrong?'”

Clark said expert witness and testimony indicated the shop did everything right, but  “however, we didn’t check these other things.”

“It was a devastating thing to go through,” he said.

Following the lawsuit, Clark said he went to a direct repair program manager and shared the documentation of the procedures that the lawsuit proved needed to be followed.

Clark said the insurer’s response was that they would pay for him to perform that work. However, it said his shop could no longer be on the DRP as the carrier never paid for those procedures, and if he asked to be compensated, it wouldn’t be competitive for the market, according to Clark.

“I couldn’t believe it,” he said. “… ‘So I’m an idiot, and because everybody else is an idiot, I can’t now be smart to be able to get compensated for this?'”

This seems to us as a disincentive to good behavior, and Clark earlier recalled asking shops why they’re not doing a particular required procedure. The answer: “‘They won’t pay me.'”

“You can’t let how much affect how to,” he said.

To view the video of the SCRS OEM Technology Summit panel, you’ll need a free SCRS account. It’s easy, and anyone can obtain one — you don’t need to be a formal SCRS member or work at a body shop.

If you’re an SCRS member who hasn’t yet established an account on SCRS.com, visit www.scrs.com/set-password to get that ball rolling.

“The Hidden Dangers of Vehicle Technology, Improper Repair Methodology and Your Liabilities” was perhaps the most memorable panel during the SCRS OEM Collision Repair Technology Summit. See a video of the session on www.scrs.com. (Screenshot from www.scrs.com video)