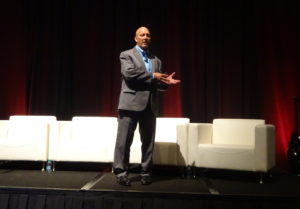 “Who Pays for What?” data last year revealed 60.5 percent of 488 surveyed shops reported researching OEM repair procedures at the time of the estimate either all or “Most of the time,” a big leap from the 48.8 percent of the 494 respondents in 2017.

However, only 24.8 percentage points of that 60.5 percent shops were researching procedures every time. The majority, 35.7 percentage points, still fell short of what experts advise should be done with their “most of the time” answer.

“This is a concern for us,” Mike Anderson, CEO of study co-author Collision Advice, said while presenting the data during a webinar on Subaru OEM repair procedures in December 2018.

The leap in shops using repair procedures likely was fueled by the $31.5 million Oct. 2, 2017, verdict against John Eagle Collision after a Texas jury concluded the shop’s failure to follow repair instructions on a 2010 Honda Fit exacerbated injuries to its occupants. (John Eagle Collision later settled with the plaintiffs, Matthew and Marcia Seebachan, for an unspecified amount.)

The 2017 “most” and “all” results were a middling gain (well within the margin of error) over 2016. However, it’s important to note they were collected throughout the month of July 2017 — many likely before attorney Todd Tracy announced the Seebachans’ lawsuit July 24, 2017. 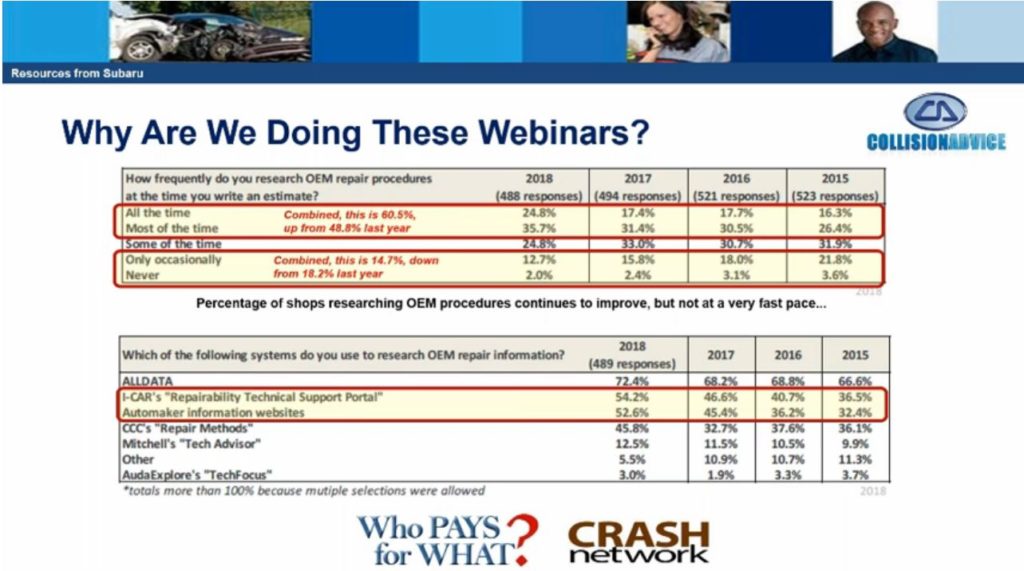 2018 also saw OEM and some third-party repair procedure aggregator websites grow usage. ALLDATA remained the most popular source of repair procedure information, at 72.4 percent of 489 respondents using it, according to the “Who Pays?” data. That’s up from 68.2 percent in 2017. (The margin of error was 3.7 percent on questions with 700 respondents.)

I-CAR’s Repairability Technical Support portal, which contains links to official OEM repair procedure websites and answers the education organization has received from OEMs over the years, was second at 54.2 percent of respondents (shops using more than one resource were allowed to provide multiple answers), up from 46.6 in 2017. The actual official OEM repair procedure websites were used by 52.6 percent of shops, up from 45.4 percent. Finally, CCC Repair Methods grew from 32.7 percent of respondents in 2017 to 45.8 percent in 2018.

Despite the gains recorded in both repair procedure software usage and overall reference, the problem of shops failing to consult repair procedures before fixing customers’ vehicles might still be severe. Collision Industry Conference Chairman Jeff Peevy (Automotive Management Institute) recently reported conclusions that the auto body sector is divided into engaged, active shops and other too consumed with their small-business problems to engage with the broader industry. We’d suspect the “Who Pays?” respondents skew towards the former group, and the industrywide picture might not be as rosy as their responses suggest.

Help the industry by taking the current “Who Pays for What?” survey on “not-included refinish operations through Jan. 31. All answers are kept confidential — data is published only in the aggregate — and participants receive a copy of the report.

Anderson also offered some other insight into repair instructions during the December Subaru webinar, part of a series Collision Advice has hosted on using OEM procedures. (Shops looking for similar resources can also check out a parallel in-depth series on Collision Hub and the quick-start-guide-type videos on I-CAR’s RTS portal illustrating finding and logging in to sites.)

“Recommend”: The webinar took a question on if OEMs would use stronger language, such as “require” instead of “suggested” or “recommended,” in position statements. Anderson said that based upon his experience, it can have to do with the culture of some Asian manufacturers. To say something was required would be considered “demeaning” and “rude”; you would defer to the “politest” way of saying something, according to Anderson.

For example, in Japan, a recommendation by one’s boss or father would be a command, he said.

However, Anderson also noted that “myths” exist on how often OEMs say “recommend” in position statements. He said that while some OEMs merely recommend pre-repair scans, none that he’d seen used the term for post-repair scans. Rather, terms like “must” or “mandatory” were used then.

Position statements: Subaru is an anomaly among OEMs in that its position statements aren’t stored on its official repair procedure website. According to Anderson, those documents can only be found on the auto industries’ OEM1Stop or CrashRepairInfo portals.

“Who Pays for What?” homepage and results

“Who Pays for What?” data last year revealed 60.5 percent of 488 surveyed shops reported researching OEM repair procedures at the time of the estimate either all or “Most of the time,” a big leap from the 48.8 percent of the 494 respondents in 2017. (Collision Advice and CRASH Network data; screenshot from Collision Advice webinar)