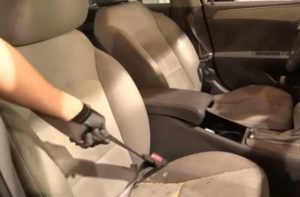 Felder and co-hosts Larry Montanez (P&L Consultants) and Mark Olson (Vehicle Collision Experts) were demonstrating blueprinting on a 2012 Chevrolet Malibu LT on the April “Repair University Live.”  While some of the steps they described on the show might be specific to that specific year-make-model combination, General Motors position statements (2322743 and 2133164) dating back to at least 2014 confirm that multiple restraint tests and inspections are indeed necessary after any collision, on any GM vehicle.

Despite the position statements and contents of individual vehicle repair procedures, it’s likely that repairers are failing to perform such inspections.

About 31 percent of shops who ask to be reimbursed for the work when dictated by OEM repair procedures reported being paid “always” or “most of the time” in an April “Who Pays for What?” survey. However, it was more likely for insurers to “never” pay the shop for their work — and still even more likely the shop had never asked. Around 60 percent of respondents reported never pursuing reimbursement.

“Some even go so far as to state seat belts must be replaced if they were in-use during a collision,” he said in a statement. “Some OEMs also state that the inspection process includes using a scan tool.”

Felder said that she had 20 years in auto insurance and was only billed for inspection “visiting this guy’s (Montanez’s) shop.”

The Malibu on the show had struck a pole in an impact apparently low-speed enough that the airbags didn’t deploy, according to Olson.

Olson said General Motors says “clearly” that after any collision, a series of components must be checked. (Obviously, you’ll need refer to the actual OEM repair procedures — the paid site, not the free one — for any 2012 Malibu LTs or any other GM vehicles in your shop.) Any damage calls for that part to be replaced, and any damage to a mounting point or mounting hardware dictates the hardware be repaired or replaced as needed, he said.

If the airbag didn’t deploy, GM still wants repairers to check the steering column, and inspect for “any type of damage,” Olson said. Montanez said that in many cases, the shop will have to drop the knee bolster — which might have an airbag as well. If there’s an airbag, the battery would have to be disconnected, Olson noted. 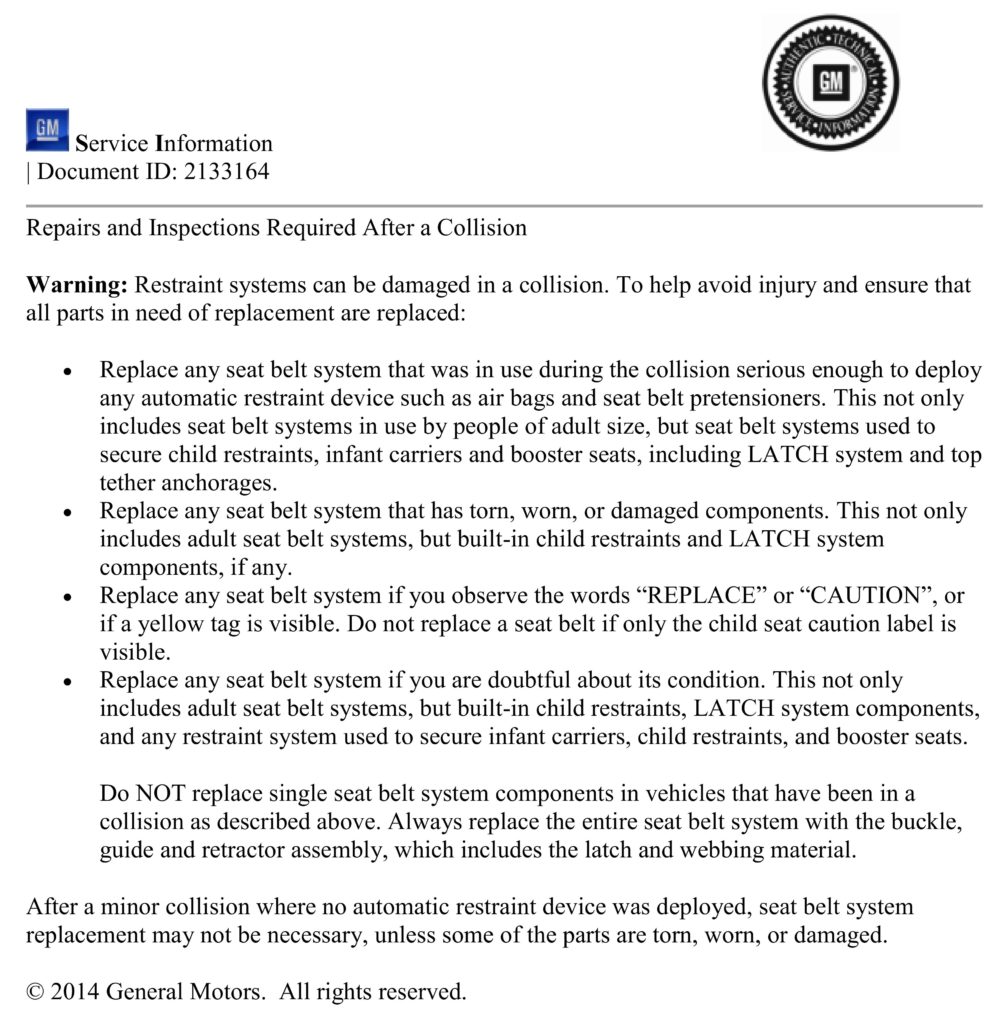 Next, the shop would have to check the instrument panel, knee bolster and mounting area and inspect the bolster for bending, twisting, buckling and other damage, and some disassembly might be required, according to Olson.

The sub-two-hour live show wasn’t going to tear apart the dash, but “in some cases, you may have to do that,” Olson said.

Felder asked if these procedures were included. “This is not included,” Olson said. He said the estimator should document these steps.

Olson said the shop should then perform a seat belt test — instructions which are not on the free Genuine GM Parts repair information site, only the paid one.

With the ignition switch on, verify that the seat belt reminder lamp works when a seat belt is buckled and unbuckled, Olson said. In the case of the unfortunate Malibu on the shop, the driver’s belt couldn’t be buckled as it had locked up, he said. It needed to be replaced because of the tensioner, he said.

The live show demonstrated a check on the front passenger belt. This entailed ensuring the shoulder belt guide swiveled freely, the webbing was fully and flatly in the guide slot, and webbing didn’t bind or show any stretching or other issues when pulled all the way out, according to Olson.

Montanez said often, the inspector will only check the outward-facing side of the belt. “Flip it over,” he said, calling it important to check the other side as well.

The back side of the seat belt runs on a piece of steel, and the accident will produce burn marks or other signs of the friction on the nylon, according to Montanez. Even if the belt didn’t lock up and moves freely when pulled, such indicators mean the restraint needs to be changed, he said.

The shop also had to verify the buckle faced inboard and was accessible, the retractor units were securely attached, and the anchor bolts were secure, Olson said. 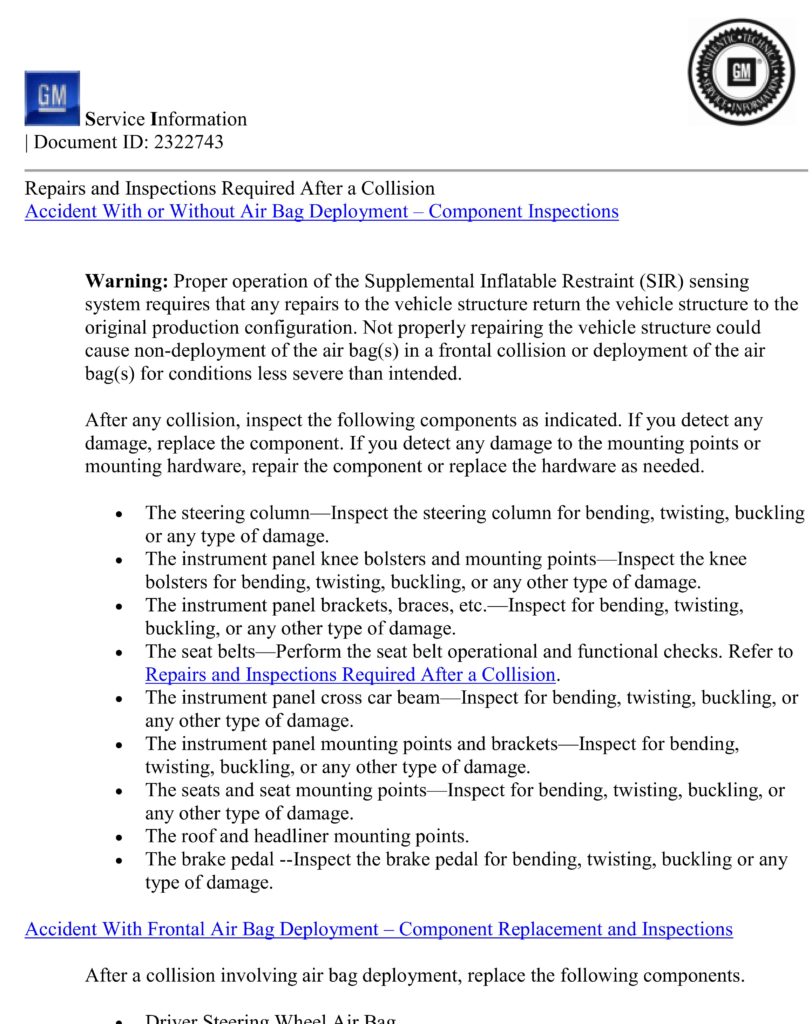 The webbing should be allowed to retract and checked to ensure it did so frreely and went back to the retractor, Olson said. If it didn’t retract, the shop would have to check other GM repair procedures for that scenario, he said.

The seat belt would be buckled, and the technician would then sharply tug on the latch to ensure the plate buckle and latch were tugged, Olson said. Finally, the tech would push the seat belt button and verify the latch releases and the button goes back to its initial position.

“Lot of things to check here,” Olson said. These checks would be repeated on every seat belt — worn or not — and then GM has other steps for center seats, he said.

It also has to perform a dynamic test on an unoccupied stretch of road, Olson said. This involves a test drive with a passenger as well, he said. The driver accelerates to 10 mph and hits the brakes firmly, verifying that the seat belt locks, according to Olson. If it doesn’t lock, the shop is instructed to R&I the seat belt retractor, tilt it, and perform another test, he said.

“Many companies have the same process,” Montanez said.

If this seems absurd to you, consider two things. One, the seat belt is one of the most important pieces of technology keeping your customers alive. Why wouldn’t you spend extra time to make sure it works correctly?

“Research has found that lap/shoulder seat belts, when used, reduce the risk of fatal injury to front-seat passenger car occupants by 45 percent and the risk of moderate-to-critical injury by 50 percent,” the National Highway Traffic Safety Administration wrote in April. 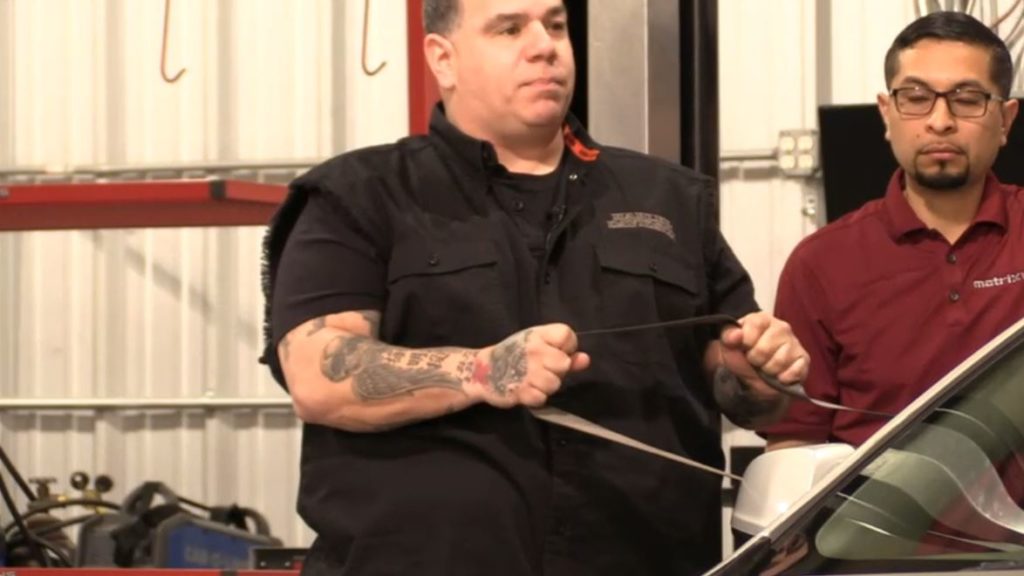 Two, failure to perform such checks can be flagged in court. Olson recounted (offering the caveat that he might be wrong on some details but “it’s pretty close) the story of a shop which wound up settling for $8.5 million. It had failed to perform restraint inspections while repairing a vehicle which had been backed into by a truck while parked and unoccupied, according to Olson and Felder. A subsequent collision left occupants paralyzed, Olson said.

Here’s another point about restraints both a shop and customer might forget. An interview with the customer about the collision and occupants (another step in blueprinting) revealed the Malibu to be carrying a child in a safety seat.

If there’s no child seat within a vehicle at your shop, it’s possible the customer has installed it in their rental car. But all manufacturers say “it has to be changed” following a collision, Montanez said. The customer might not know that, and could be driving around with a “potentially unsafe” car seat, Olson said. The customer should be alerted to the issue.

A shop doesn’t have to charge the customer (who is the vehicle owner, not the insurer) for the inspections. But the work must be done for professional, ethical and legal reasons.

“You cannot make a business decision for choosing not to do something,” Felder said. She advised shops to put it on an estimate to document the work was done, regardless of whether they actually charged for it.

GM position statement 2133164: “Repairs and Inspections Required After a Collision”

GM position statement 2322743: “Repairs and Inspections Required After a Collision” (Note: Hyperlinks within document work on the paid GM site.)

General Motors position statement 2322743, which dates back to at least 2014, confirm that multiple restraint tests and inspections are indeed necessary after any collision, on any GM vehicle. (Provided by General Motors)

General Motors position statement 2133164, which dates back to at least 2014, confirm that multiple restraint tests and inspections are indeed necessary after any collision, on any GM vehicle. (Provided by General Motors)

P&L Consultants co-owner Larry Montanez said on an episode of Collision Hub’s “Repair University Live” that often, the inspector will only check the outward-facing side of the belt. “Flip it over,” he said, calling it important to check the other side as well. The back side of the seat belt runs on a piece of steel, and the accident will produce burn marks or other signs of the friction on the nylon, according to Montanez. Even if the belt didn’t lock up and moves freely when pulled, such indicators mean the restraint needs to be changed, he said. (Screenshot from Collision Hub YouTube video)