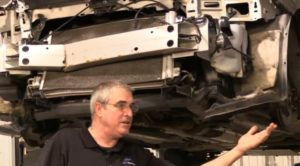 “This is one of the biggest things that we see when we go into shops,” he said on an April Collision Hub “Repair University Live.”

Wire harness removals often aren’t in estimating system labor time databases, which means the estimator would have to ask a technician how long the work takes, according to co-host Larry Montanez (P&L Consultants).

A shop might be full of steel and aluminum metal particulates, Olson said. Every electrical system has electromagnetic energy because of the battery, and shavings can enter the connector, he said.

Automotive wiring is often multiplex, which means the amperage going through the wire changes what system is activated, Olson said. (This allows OEM to save on wiring and shave weight, he said.)

“That’s (dust) going to be a potential problem,” he said.

Olson said that often when they enter shops, the repairer has merely covered the radiator hose and potentially the air conditioning. “Those (connectors) are just flapping free,” Collision Hub CEO Kristen Felder said.

Even if the repairer isn’t grinding on that specific vehicle, “stuff is in the air,” Olson said. A car with a taillight removed next to a vehicle receiving grinding was still at risk.

The time necessary to protect the connectors is not included, according to Olson.

Montanez, who offered a method of labeling wires and taped them on the show, also advised elevating them. “A lot of times, I see them almost get run over,” he said.

Olson noted that a shop housing a vehicle with windows down and parts on the seat is bad customer service, but it’s not going to set the car ablaze.

“This (exposed connectors) could actually have some huge liability,” he said.

The show also raised another interesting vehicle electrical point. Olson pointed out how Matrix Wand’s Sergio Correa, who for the purposes of the episode doubled as a blueprinting tech, didn’t just set a disconnected battery cable down next to the battery.

Cables have “memory,” Olson said. In some cases, they need to be not just kept away from the battery but isolated with a bag or other cover so it can’t get back to the terminal.