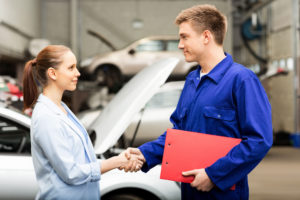 Properly establishing a contractual relationship with a customer can strengthen a collision repairer’s ability to collect payment for its work, based on a presentation this fall by attorney Erica Eversman.

It seems so obvious, but some shops and insurers have a hard time wrapping their heads around the idea that the vehicle owner is actually the collision repairer’s customer.

The customer is requesting your services and owes you for your labor. The insurer in turn owes the customer for the cost to cover the loss. (Unless the insurer “elects to repair” and actually serves as a contractor making repair decisions and delivering a fixed car to the customer. They’ll never do this, as it sticks the carrier with liability for improper work, according to Eversman.)

Eversman during an Oct. 31 SCRS Repairer Driven Education talk offered a series of sample documents which would formalize and solidify the shop-customer relationship — and counteract some insurer practices. They were slated to be posted on her Vehicle Information Services website, she said then.

(Note: Eversman stressed that the educational session was not intended as legal advice, only as ideas, and the same applies to this coverage of the talk. Anything you see here and the actual sample documents should be modified in consultation with a qualified state-licensed attorney to fit the laws of your state.)

Perhaps the most critical among them was the repair contract and authorization.

“Too many people” still rely on a handshake and oral agreement, according to Eversman. Some repairers say they have a good authorization — which won’t necessarily suffice, she said.

A shop needs a good contract with a customer, Eversman said.

“That is what a contract is: offer, acceptance, consideration. ‘I will do this for you in exchange for that from you.'”

Both parties agree, and the contract is established.

Eversman’s sample document makes it clear that it indeed a contract and contains a line to confirm that the repairer’s customer has the authority to authorize the repairs, which she said was done in situations like a lease or an out-of-state college kid authorizing repairs on what is still technically her parent’s car.

Eversman said the sample contract presented at the Oct. 31 SEMA talk presumed the customer had already agreed to the repair. She said she planned to create a document addressing situations where a customer just wanted a cost estimate, which Eversman noted was likely to require disassembly.

Section 2 of the contract states “‘thou shalt pay me'” or the car won’t be returned and establishes that the customer is the one who owes the shop, according to Eversman. 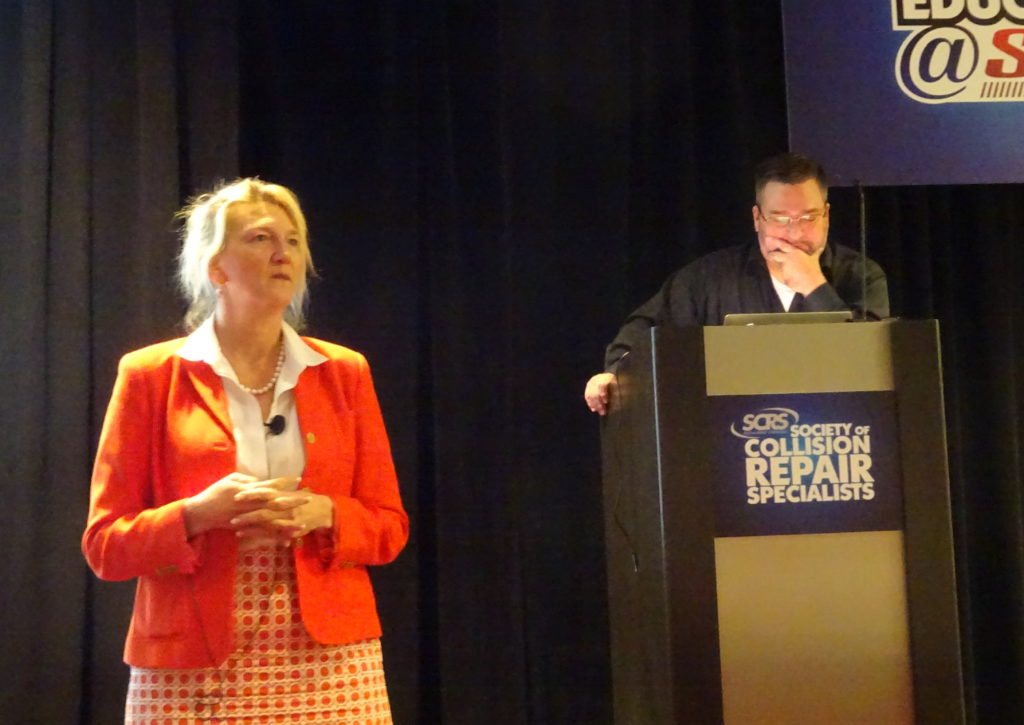 Another section of note makes it clear that the repairer has no obligation to the insurer. “This is critical,” Eversman said.

It states that any communications with insurers are a “courtesy” and that the shop “does not accept any insurer’s estimate as the cost of repair or method of repair.”

Eversman said this clause existed in part to deal with how insurers have muddled the issue.  She told the audience she repeatedly has had to beat it into judges and lawyers that “the insurer has no right” in a collision repair unless the carrier formally elects to repair.

“They just don’t get it,” she said. Insurers have insinuated themselves so much into the repair process that their role gets misperceived. She recalled a deceptive trade practice case she brought against Progressive for claiming it guaranteed a repair.

The consumer in this section even initials an additional statement acknowledging the shop’s conducting a safe and proper repair “may involve using better parts or safer repair techniques than those for which my insurer or a responsible third party may reimburse me.” The paragraph bolds language in which the customer agrees they’re financially responsible for the final bill regardless of what the insurer will or won’t pay.

Eversman said she added the title transfer wording because one carrier once attempted to use the concept of replevin, which she joked she hadn’t heard since Year One of law school.

Replevin involves demanding one’s possessions be returned, according to Eversman. The insurer had attempted to argue that as the customer had transferred the title of a totaled car to the insurer, the shop couldn’t hold what was now the carrier’s property, she said. Nor did the carrier owe for the customer’s repair bill, it argued.

The new language would make any attempt to transfer title prior to payment breach of contract — and an insurer attempting to pursue that option would be tortiously interfering with a contract, Eversman said.

Another section discussed the shop’s right to “Expectancy Damages,” which places the customer on the hook for the shop having “lost the opportunity to accept other repair contracts and perform other repairs by designating personnel and dedicating resources to the preparation for and engagement of the repair of the Vehicle.”

Basically, by agreeing to fix the customer’s car, the shop has passed up the chance to do a repair for someone else, according to Eversman. Therefore, the repairer receives the full amount it specified on the damage analysis and all other charges it expected to receive if the customer takes the car somewhere else, “even if persuaded to breach by a third party privileged to interfere with a contract between Customer and Repair Facility.”

“This is designed to give you strength,” Eversman said, noting that “judges love this stuff” because of its clarity.

It would be easy to take such a contract to an attorney and pursue damages if breached by the consumer under the insurer’s instruction, she said.

Properly establishing a contractual relationship with a customer gives collision repairers a better shield against insurer interference in the repair process. (londoneye/iStock)