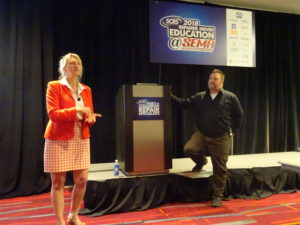 Insurers attempt to play both sides of the fence and dictate both how a repair is done while electing to reimburse the customer for the loss, but the two are actually separate, mutually exclusive choices on first-party claims, collision repair attorney Erica Eversman and former shop owner Wade Ebert said during an SCRS Repairer Driven Education talk this fall.

Eversman (Vehicle Information Services) said she got the idea from attorney Patrick McGuire, who discussed the idea in detail in the 2005 BodyShop Business column “Keep This Job.” (Note: Eversman stressed that her and Ebert’s educational session was not intended as legal advice, only as ideas. The same applies to this RDN article. Before you act on anything described here, consult with a qualified attorney licensed to practice in your state.)

Insurance policies typically describe the options an insurer has to remedy a first-party loss, she said Oct. 31 during SEMA. One option is to elect to repair — the insurer fixes the vehicle themselves. The other is to pay for the loss in money, such as by paying the customer who pays the body shop. (The third is to total the car, which would make it no longer the repairer’s problem anyway.)

“They can do one or the other, but not both,” said Ebert, the former owner of American Auto Body.

If an insurer elects to repair a vehicle, they take it to the shop of their choice, direct precisely how it should be fixed, and return the fixed vehicle to the owner, according to Ebert. However, by doing so, the insurer would “shoulder the liability,” he said.

“Therein lies the difference,” he said.

If the insurer instead wants to pay for the loss in money, it’s up to the customer where the car should be repaired and how it should be fixed, according to Ebert. The insurer just pays the customer back for the bill.

Eversman said a case found State Farm electing to repair a vehicle and dictating the repair. But when the vehicle was put back on the road and a problem arose related to it, “State Farm got sued.”

The insurer protested, but the court ruled that by electing to repair, State Farm converted the insurance policy to a repair contract and became the general contractor — and therefore liability for the finished product’s quality.

State Farm could certainly sue the repairer, but “you’re the deep pocket, baby,” she said. 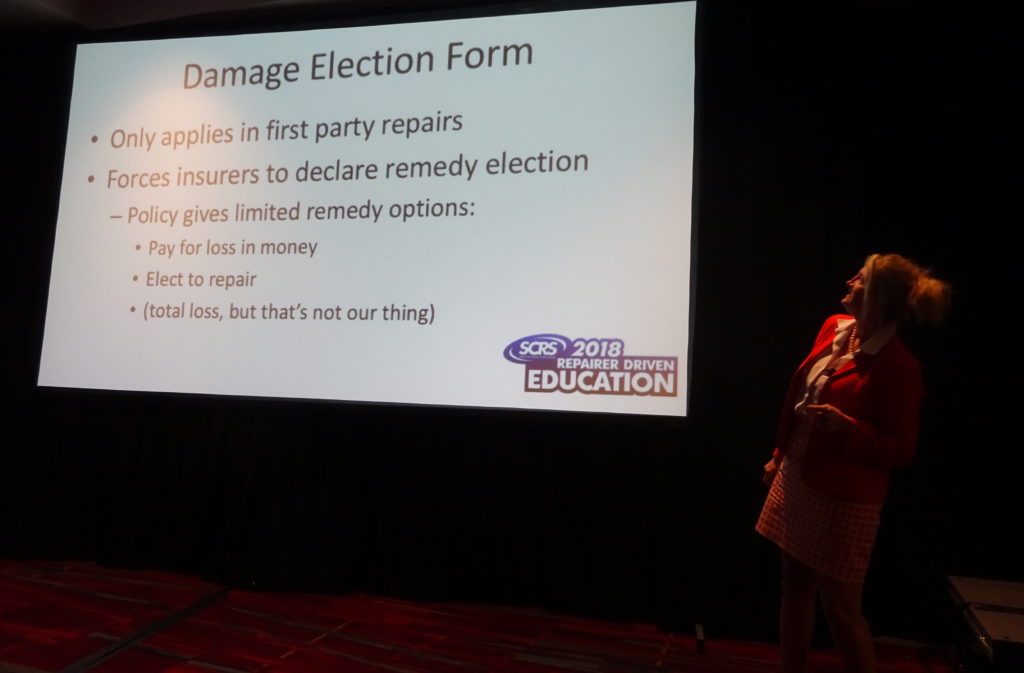 An audience member asked how the elect to repair option was possible if the insurer wasn’t a registered repairer. Eversman explained that in such a case, “truly, the insurance company is the customer.” They control the repair and sublet the work to a licensed shop, she said.

In that situation, the insurer would get to dictate the repair, Ebert said. But “no matter what they tell you, that is never what happens,” he said. The insurer doesn’t want the liability that accompanies electing to repair, and so they will always instead pay for the loss in cash, according to Eversman and Ebert.

Eversman said electing to repair came out of fire insurance about 150 years ago, primarily involving commercial properties and prior to the “gamesmanship” and bad insurer behavior today, she said. Insurers at the time argued that they had a great deal of experience in fire repairs, knew who the reputable, fairly priced contractors were, and wanted the right to handle the repair. The courts agreed it would be acceptable for them to do so.

Insurers attempted to extend this to collision repair, but ran up against the fact that they’d hold the liability, according to Eversman. “They don’t want that,” she said.

This prompted direct repair program networks, which allowed the insurer to control how the repair was done while avoiding the liability, she said.

Eversman’s presentation centered around a series of sample documents (slated to be posted on the Vehicle Information Services website) collision repairers could adapt to support their businesses and counter insurer meddling. (All the forms would need to be modified in consultation with a qualified, licensed attorney to work in one’s own state.) One of these was a means by which a customer could ask an insurer which remedy the carrier was using to cover the loss: elect to repair

“It freaks them out,” Eversman said. “They don’t know what to do with it.”

But since every state requires carriers to respond to a legitimate question about a policy or claim in a particular number of days, “they have to respond.”

“If you have identified that you are electing to repair, you acknowledge that insurer is equally liable for the quality and propriety of the repair as is the repairer,” the sample document states.

Of course, “I have yet to have them respond,” she said. But on a practical basis, a shop doesn’t need to wait for the insurer to say whether they’re electing to repair or paying for the loss, according to Eversman.

Asked if the insurer electing to pay for the loss in money would mean full compensation, Eversman said yes. The insurer chose not to be involved in the repair, so it has to pay for it without trying to control it, she said.

In a third-party case, the victim has no contractual obligation to the insurer. The insurer has “zero right” to be involved if they’re not electing to repair, Eversman said.

Or as Ebert put it in a colorful hypothetical, if Eversman had a policy covering her “mud and sticks” car hit his car made of “Jell-O,” he isn’t bound by her contract to have his vehicle repaired with mud and sticks. “It doesn’t apply to me,” he said.

A request for a first-party insurer to articulate how they plan to remedy the loss can be useful to a body shop, according to collision attorney Erica Eversman. (John Huetter/Repairer Driven News)

A excerpt from a sample request for a first-party insurer to articulate how they plan to remedy the loss can be useful to a body shop, according to collision attorney Erica Eversman. (Provided by Eversman; blurred by Repairer Driven News to protect author’s intellectual property.)