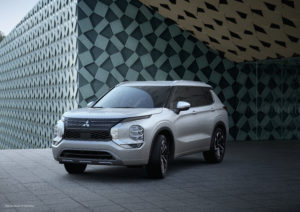 The use of the light, strong substrate allowed Mitsubishi to save about 50 pounds in the body-in-white compared to typical steel, the automaker said.

A Mitsubishi diagram shows 1,470-megapascal “door rings” which use the ultra-high-strength steel for the A-, B- and hinge pillars, frame rails and part of the roof rails. Mitsubishi also used the 1,470 MPa steel in other locations as well, including the front bumper beam.

Repairers will encounter other ultra-high-strength steels within the body-in-white of the unibody vehicle. The front frame rails fall in the 780-1,180 MPa range, as does the transmission tunnel, the roof crossmembers perpendicular to the A- and B-pillars and at least some of the floor crossmembers.

A large proportion of the remainder of the body-in-white contains high-strength steel in the 440-590 MPa range.

Mitsubishi offered repairers perspective on the body-in-white’s engineering beyond its tensile strength. 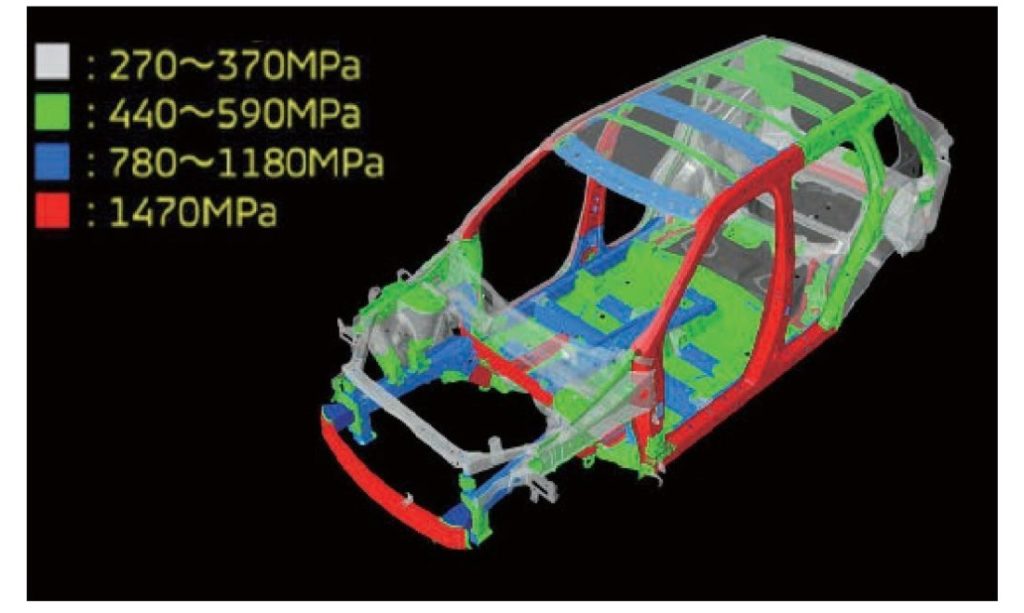 “A cyclic structure was used to connect the engine compartment suspension members to the spring house and cowl top, and a cyclic structure was also used for the cabin windshield and from the rear door back-floor member to the rear pillar and roof,” Mitsubishi wrote in a detailed press information document. “Adding a cyclic structure that is connected in three locations, one to the engine compartment and two around the cabin, increased the front body rigidity by 26% and the vehicle torsional rigidity by 33% over the previous model and contributed to significantly increasing the driving stability. …

“To achieve a high energy absorbing structure for the front area, the suspension member cross section was increased to give the suspension the required strength while driving, and together with the front side members, the energy absorption rate during a collision was also increased. The six floor members under the body are designed to disperse the impact during a collision. Optimizing the arrangement suppresses floor vibration and contributes to greater ride comfort.”

It’ll be important for body shops to honor Mitsubishi’s repair procedures and restore this structure’s functionality in the way the OEM intends.

Occupants will receive further crash protection from extra airbags compared to the prior Outlander. A front center airbag will fire from between the two front seats to keep the driver and passenger from colliding, and Mitsubishi said it added second-row side airbags. On the whole, the vehicle has 11 airbags standard.

“An effort was made to reduce the size of the driver’s seat airbag stowage space to increase the degree of freedom for the steering wheel design,” Mitsubishi wrote.

Mitsubishi said the driver’s airbag module itself includes a dynamic damper which leverages the mass of the module as a dampener.

“Together with the increased rigidity of the steering column, this minimizes the unpleasant vibration transmitted to the hands from the steering wheel and improves the class-above feeling and comfort of the driving operation,” Mitsubishi wrote.

Mitsubishi also embraced some nonferrous substrates in the vehicle body. It built the fenders out of plastic, saving about 4 pounds compared to steel.

The automaker opted for an aluminum hood, producing a a 13.2-pound weight savings, and deployed aluminum in the suspension.

“For the suspension, aluminum is used for the front and rear knuckles, a first for MITSUBISHI MOTORS,” the OEM wrote. “Both weight reduction and high rigidity were achieved by using forged aluminum for the front lower arms and rear upper arms.”

Mitsubishi said the suspension featured improved metrics over the prior Outlander and included changes beyond material selection.

“Hollow stabilizers were also employed for the front and rear to reduce weight while also improving roll rigidity by increasing the bar diameter,” Mitsubishi wrote. “With this, the roll angle during cornering is decreased by 14% compared to the previous model. Also compared to the previous model, the overall suspension rigidity is increased by 17% for toe rigidity (tire direction) and 5% for camber rigidity (tire tilting) at the front, and by 40% for toe rigidity and 14% for camber rigidity at the rear. Along with decreasing the roll angle, giving the suspension high rigidity contributes greatly to linear stability and improved traceability during cornering. The suspension stroke was increased by .8 in. over the previous model on the extension side for both the front and rear to provide flat and smooth, secure and high-quality ride comfort.”

Mitsubishi also gave occupants a nicer ride through the use of suspension bushings. Liquid seal bushings on the front lower arm cut the tingling a driver feels from the tire vibration “transmitted to the steering wheel as a specific frequency,” and other liquid seal bushings on the front side of rear crossmembers reduce vibration experienced by folks in the Outlander’s back seats.

“To improve quietness, the rear suspension cross members were connected to the body via bushings to reduce the noise from the tires, which are a major path of noise infiltration,” Mitsubishi also wrote. “The anti-vibration structure was combined with the link elastic supports for minimial road- noise and to provide a comfortable ride.”

Repairers will notice improved noise, vibration and harshness mitigation on other Outlander body parts. Mitsubishi said it added weather stripping to the gap between the front and back doors, and closed weather stripping gaps. It also sealed the service hole opening in the door inner with a plastic cover.

The body itself is optimized to make the noise more pleasant, which is kind of neat.

“The A-pillar garnish shape was optimized to create a stepped shape to keep out rain water while reducing wind noise,” Mitsubishi wrote. “The noise generated inside the cabin was reduced by tuning the resonance of roof, back door, floor, panels, and other areas to minimize the low frequency humming sound that makes driving tiring.”

Finally, there appears to be acoustic glass in the windshield and front door windows. Mitsubishi describes a “sound insulating film that is laminated in the glass.”

Returning to the vehicle exterior, the 2022 Outlander will be coated with one of eight colors. These include three special “Diamond Color” options: Red Diamond, White Diamond and the new Black Diamond finish.

“Black Diamond is a special color consisting of three coats: a high-density gloss layer containing glass is added to produce the impression the vehicle appears jet black when not lit, but then emits a radiant shine when struck by light to express the power that is hidden within,” Mitsubishi wrote.

The painters will be coating substrates shaped to include “muscular fender flares” and “sharply sculpted, edgy character lines.” There’s also an option for a large sunroof. “The width of the support pillar was kept to 5.1 in. to not detract from the feeling of openness,” Mitsubishi wrote. 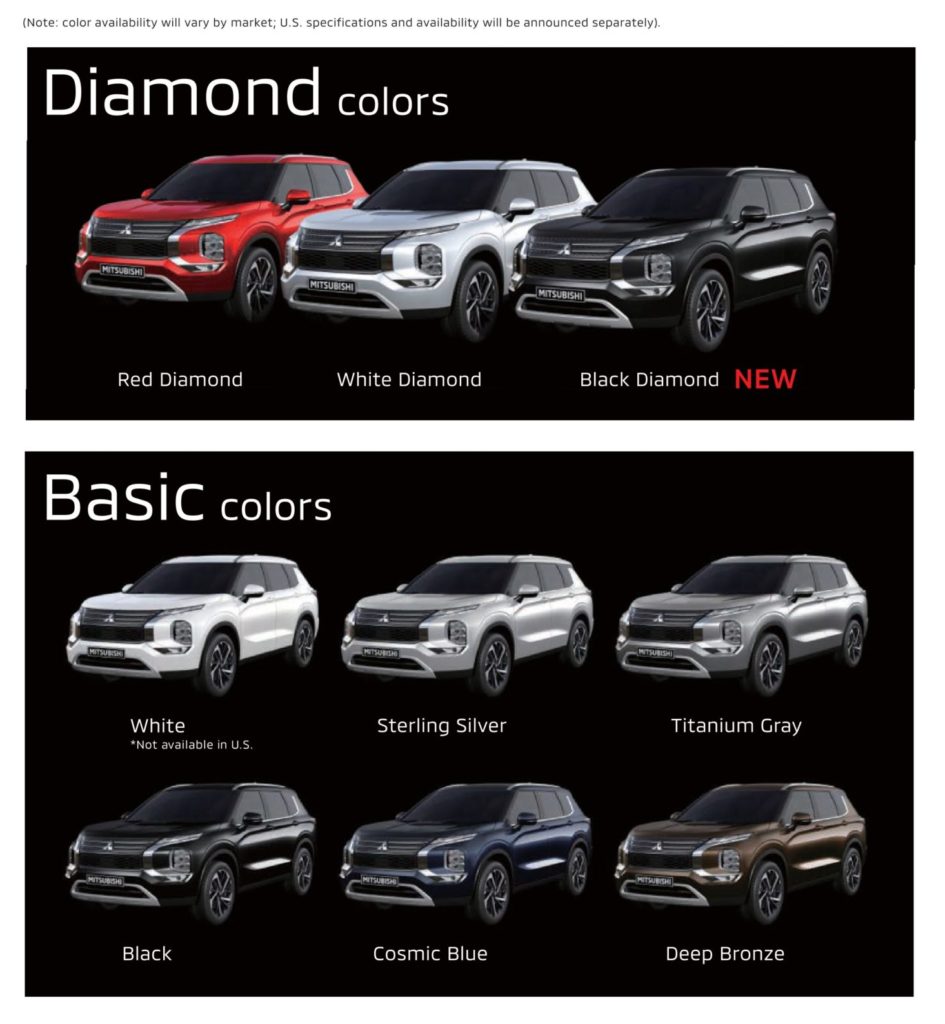 The 2022 Mitsubishi Outlander is shown. (Provided by Mitsubishi)

Steel strengths on the 2022 Mitsubishi Outlander are shown. (Provided by Mitsubishi)

Structural elements on the 2022 Mitsubishi Outlander are shown. (Provided by Mitsubishi)

Airbags on the 2022 Mitsubishi Outlander are shown. The vehicle comes with 11 airbags standard. (Provided by Mitsubishi)

Mitsubishi said the 2022 Outlander suspension featured improved metrics over the prior Outlander and included changes beyond material selection. Mitsubishi also gave occupants a nicer ride through the use of suspension bushings. (Provided by Mitsubishi)

The 2022 Mitsubishi Outlander will be coated with one of eight colors. These include three special “Diamond Color” options: Red Diamond, White Diamond and the new Black Diamond finish. (Provided by Mitsubishi)