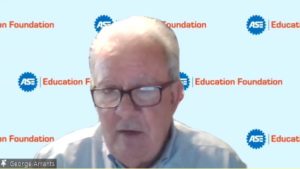 The collision industry’s inability to foster new technicians risks driving them out of the industry and exacerbating the tech shortage, according to ASE Education Foundation Vice President George Arrants.

Arrants presented the Jan. 21 virtual Collision Industry Conference with Bureau of Labor Statistics data indicating that the “Automotive body and related repairers” sector had 155,500 employees in 2019 and projecting it’d need 159,900 by 2029. Repairers would also average 13,600 job openings a year which would need to be refilled.

The collision sector isn’t lacking students, according to Arrants. But it was losing vo-tech programs which could feed the local collision workforce, he said. It also was doing a poor job of retaining the entry-level techs it had, he said.

Arrants said a survey a couple of years ago found 42 percent of vo-tech grads no longer work in auto service. He said he describes it as, “‘We’re eating our young.'”

Many of them went into other technical trades, he said, but the “scary one” was that 14 percent entered retail/food service.

“The starting pay was higher there,” Arrants said.

The BLS says auto body workers received a median annual salary of $43,580 in 2019, but Arrants said that figure reflected the government multiplying the median hourly wage by a typical 2,080-hour work-year.

Arrants also pointed out that more single-parent families exist, unlike when folks in the industry were brought up. It’s not a part-time job situation for some students; they might be a major part of “the family survival,” he said.

Arrants said that if a collision repairer brings a new hire into a shop and expects them to be productive and profitable right from the start, “I’ve got a bridge for sale. It’s not happening. You have to mentor these people into your place of business.”

They needed to be mentored into the shop culture, Arrants said. “But more importantly than anything” was a shop culture positive enough to accept the newcomer in the first place. “Or will you just eat them alive?” he said. The fledgling repairer has put their time and possibly money into learning the craft, and they don’t need to have “somebody beat them up” when they enter a shop,

“(W)e need to build a culture of constant and consistent learning filled with professionalism, environment, relevant tools/equipment where students are happy to attend, progress from and further develop their careers at shops that provide the same,” an audience member observed on the virtual CIC chat. “We need to act as noble as the profession should be.”

He said companies who invest in the concept and pick a mentor “that truly has the capability and the desire to be a mentor” are experiencing “great retention. They really are.”

But “you have to onboard somebody into your shop culture” and your company’s way of doing business, Arrants said. Otherwise, the student taught to accomplish a task in a different way might unfairly be viewed negatively — “‘That idiot doesn’t know anything,'” according to Arrants.