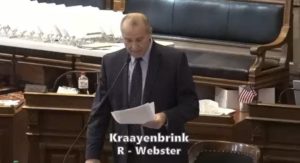 The Iowa Collision Repair Association notched up a legislative victory this session with the passage and enactment of a bill raising the damage threshold for a salvage title.

“We had some good news as of last week,” said Weiser, president of Capitol Strategies Group.

The House and Senate passed SF 230 in February.

Iowa law had defined a “wrecked or salvage vehicle” as one “for which the cost of repair exceeds fifty percent of the fair market value of the vehicle.” SF 230 raises that threshold to vehicles needing repairs of more than 70 percent of fair market value.

Salvage titles go hand-in-hand with the declaration of vehicles as total losses, a status which carries ramifications for the collision repair and auto insurance industries. The Iowa Insurance Institute and American Property Casualty Insurance Association supported the bill alongside the ICRA, and Weiser said that while body shops and insurers aren’t always able to work together, “we did on that one.”

Asked if Iowa shops were losing money because of vehicles being totaled, Weiser said, “I think that became an issue.”

Technically, an equivalency between the salvage value and total loss threshold isn’t explicitly codified in Iowa law or regulations, according to Tyler Ernst, an associate at Des Moines, Iowa-based LaMarca Law Group who in 2020 had written about Iowa’s old 50 percent threshold.

“The Iowa DOT requires a Damage Disclosure on certain vehicles when damages hit, or exceed, 70% of the value. DOT will then ‘brand’ the title accordingly.”

However, Ernst said a successful legal argument holds that since the vehicle’s damage automatically forced it to carry a salvage title, it’s impossible for the insurer and the repairer to restore it to its prior state of existence: a vehicle with a normal title. Thus, the carrier must cover the loss by totaling the vehicle and paying the consumer its cash value. 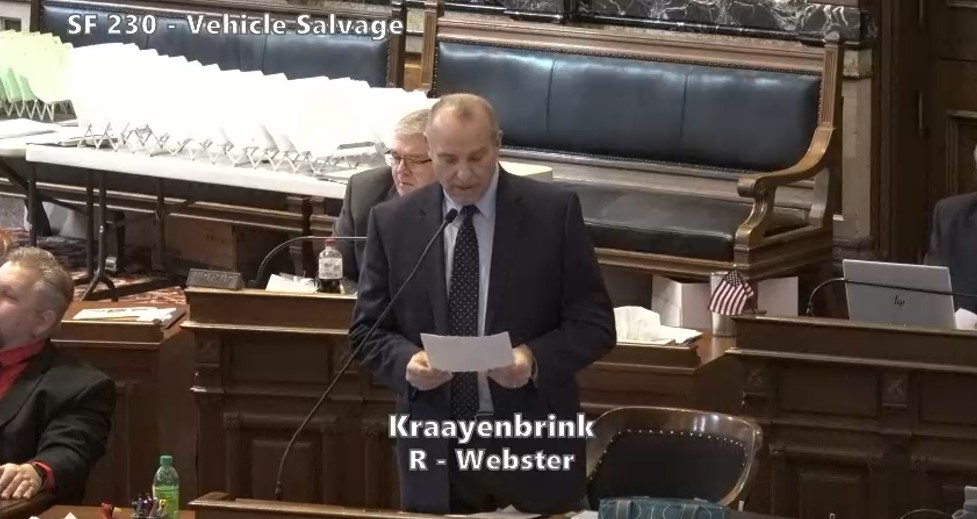 The amount an insurer paid for a total was unrelated to the vehicle loan, he told the Senate on Feb. 3, prior to the bill passing that body 45-1.

“A person must pay off the loan before they get another one (vehicle),” Kraayenbrink told the Senate.

Sometimes, the balance of the loan for a wrecked vehicle would be rolled into the loan for a replacement, “which automatically starts you with an underwater loan balance in your new vehicle.”

Kraayenbrink also cited the disparity in salvage thresholds between Iowa and at least one neighboring state. In Illinois, which shares the Quad Cities area with Iowa, “they have a higher threshold for their wrecked vehicle amount,” he said.

A vehicle with 50-70 percent worth of damage would have commanded an Iowa salvage title. But according to Kraayenbrink, it could be purchased in Illinois with a fair title under that state’s 70 percent threshold — and then titled in Iowa as non-salvage.

“It’s not really fair to some of our purchasers over here,” he said. 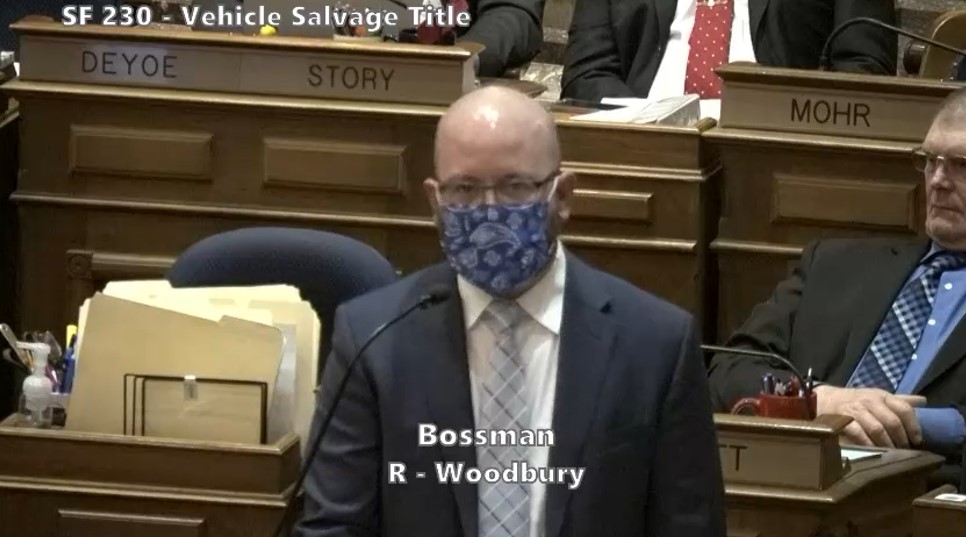 “This is a modernization issue,” Bossman told the House Feb. 16. SF 230 acknowledged changing vehicle technology and an “outdated” 50 percent threshold, he said.

A salvage title was meant to “alert a buyer for possible major issues affecting the integrity of a vehicle,” Woodbury said. But due to technology like computers and sensors, “the threshold is now easily exceeded,” particularly on older vehicles, he said. This occurred even when critical components like the frame or powertrain weren’t affected, he said.

Weiser said repairers were able to demonstrate how such charges racked up on a vehicle. “I think they did a great job,” he said.

Weiser said another tactic involved giving lawmakers a tour of his late-model Cadillac and showing off the technology which would elevate repair bills. Very quickly, it “looks like money,” he said.

Bossman also called Iowa “an extreme outlier” at 50 percent and noted that 70 percent still fell below the American Association of Motor Vehicle Administrators’ recommendation of 75 percent.

Weiser said ICRA had “a map that looked really ugly” to show legislators Iowa’s outlier status in a sea of states with higher thresholds. “That number had just gotten way outdated,” he said.

“This is also, and most importantly, a consumer protection issue,” Woodbury told his fellow representatives. An “unnecessary salvage title” cuts a vehicle’s value and can produce underwater loan situations, he said.

“This is a prudent adjustment that I hope that this body will support,” He said.

But some representatives expressed concern for vehicle buyers. 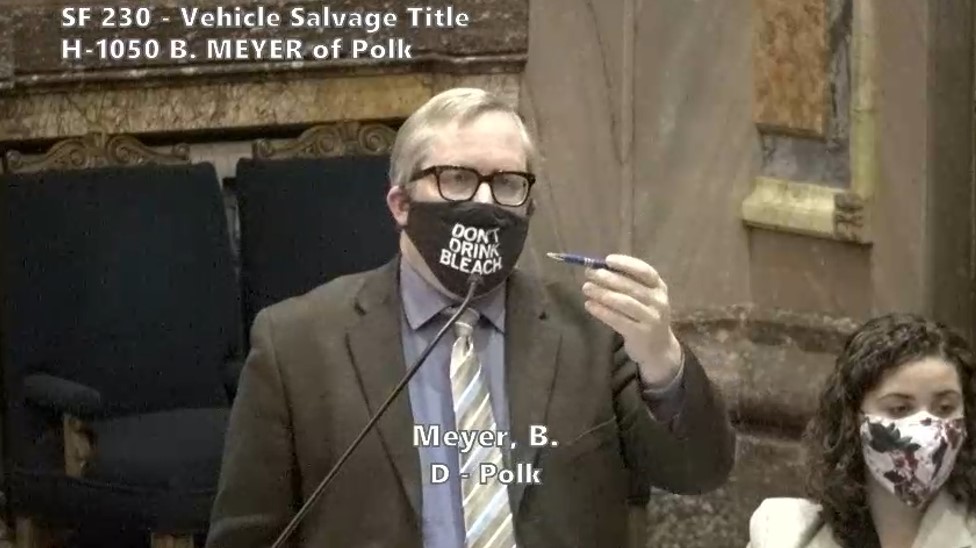 State Rep. Brian Meyer, D-Polk, allowed that Iowa represented an outlier “to some degree,” but said other states also offer other protections related to damage above 50 percent of cash value.

He proposed what he called “a consumer protection amendment” for vehicles with damage between 50 percent of cash value — “which now would be totaled” — and 70 percent.

Such vehicles wouldn’t receive a salvage title, but his amendment would have require disclosure that the vehicle had sustained significant damage.

“That is a severely damaged vehicle,” Meyer said.

He argued that the buyer deserved consumer protection, for the seller already knew the vehicle’s history. “That’s why we have this law,” he said of the 50 percent salvage threshold.

“What’s the harm in adding that consumer protection part?” Meyer said of his 50-70 percent declaration. It was “just simply warning the buyer,” he said.

However, Bossman questioned if Meyer’s amendment was germane, and House Speaker Pro Tempore John Willis, R-Spring Lake, agreed it wasn’t. Meyer called for a vote to suspend the rules, but it failed 38-54.

Rep. Dennis Cohoon, D-Des Moines, called this decision precluding a vote on the amendment “very unfortunate” and said lawmakers from both parties had historically supported a consumer protection amendment. Without Meyer’s proposed change, SF 230 wasn’t a consumer protection bill “as much as it could have been,” Cohoon said. He said he would oppose the bill. 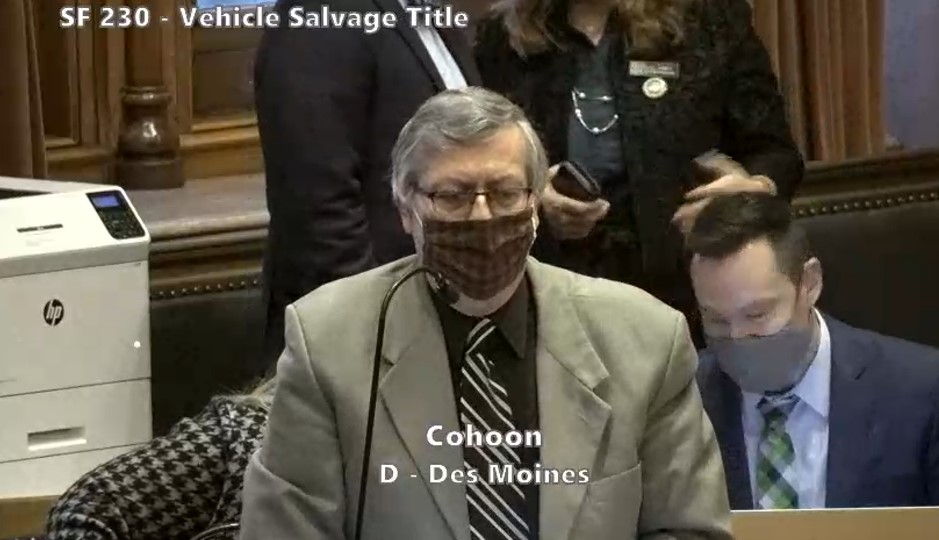 CCC’s 2021 “Crash Course” indicated that 20.5 percent of nationwide vehicle appraisals in its system were flagged as total losses in 2020, up from 19.2 percent in 2019. Though the increase might in part be attributable to larger vehicles driving faster and crashing harder on less congested pandemic-era streets, vehicle technology might indeed play a role.

Overall, the proportion of totaled losses has risen from what had been just 15 percent of vehicles totaled a decade prior. In 2013, the total loss percentage dropped as low as 14 percent.

The average totaled vehicle in 2020 cost $10,444, which would mean a repair order above $5,222 would’ve sent it to the salvage yard in Iowa. The 70 percent benchmark under the new law would allow repair orders of up to $7,310.80 before the vehicle would be a total.