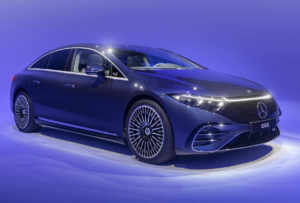 Mercedes on Thursday unveiled the fully electric EQS, calling it the most aerodynamic production vehicle in the world and “among the best in terms of quiet running.”

“A great deal of attention to detail lies behind the aerodynamic and aeroacoustic performance,” Mercedes continued in its news release, and collision repairers might need similar precision on items like body surfaces, seals and foams to restore the performance EQS owners expect.

A repair which compromises the EQS’ noise, vibration and harshness mitigation would also seem to carry an increased potential for owners to notice the difference and demand a redo.

Throwing off the aerodynamics could lead to a subtle decline in the vehicle’s electric range. (Whether or not the owner would notice is unclear, but that doesn’t change the repairer’s obligation to restore the performance as best as OEM procedures allow.)

The EQS is expected to be able to travel nearly 479 miles of range per charge. Mercedes credits this in part to the vehicle’s record-setting 0.20 coefficient of drag, which is possible in one configuration. (Mercedes noted that even other EQS configurations will still deliver strong cd values and range.)

Mercedes said a “smooth underbody” contributed to the EQS’ 0.20 coefficient of drag. The OEM said the underbody engineering included “invisible details” which were “developed diligently with great attention to the smallest details.”

It said it installs “(e)laborately matched underbody paneling in the rear-axle area to take even greater advantage of the smooth underbody of the battery.”

The EQS’ tires have “optimized geometry,” and aerodynamically optimized 20- and 21-inch wheels are available. Both the front and rear sets of wheels have spoilers, with the “arrow-shaped” rear spoilers “developed by a fluid dynamics expert directly in the wind tunnel for the benefit of a greater range.”

The vehicle also has a spoiler on its rear. 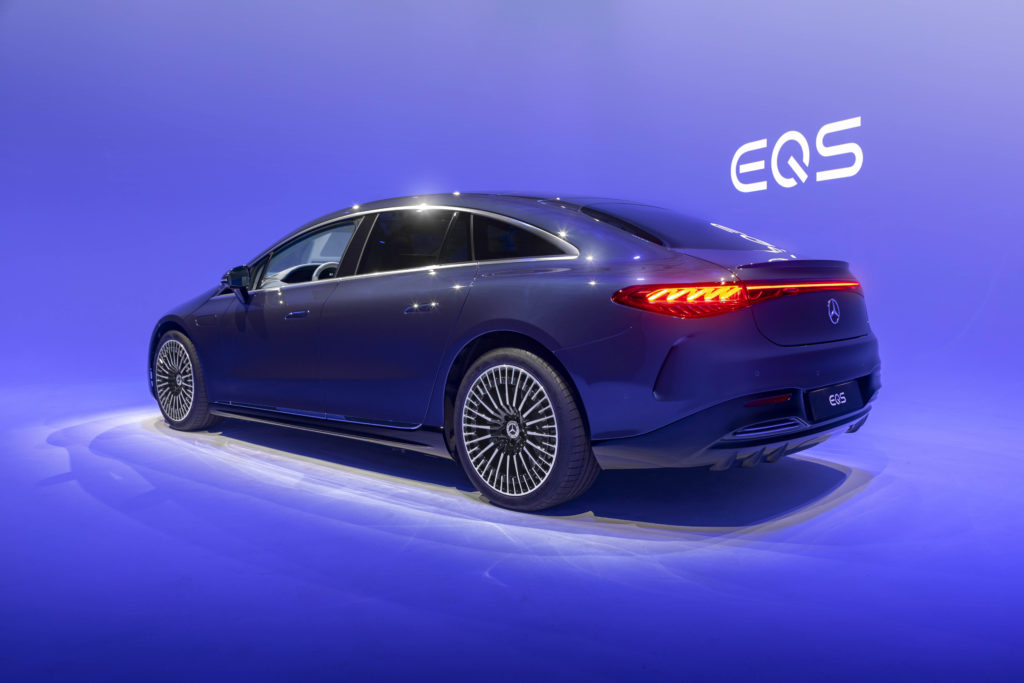 Over on the more active side of things, placing the standard AIRMATIC air suspension in COMFORT mode will cause the vehicle to automatically lower itself at high speeds for stability and aerodynamics.

“By way of example, in COMFORT mode, the vehicle body is lowered by 0.4 inches at high speeds above 75 mph and another 0.4 inches at over 100 mph to reduce aerodynamic drag and increase handling stability,” Mercedes wrote. “If the vehicle drops below 50 mph, the body level returns to the initial position. Up to 25 mph the body can be raised by 1 inch at the touch of a button, above 31 mph it is automatically lowered back to normal level.”

Mercedes didn’t specify these components as aerodynamic per se, but the OEM’s news release highlights other body features which might have an aero function as well:

“(The EQS) differs from vehicles with internal combustion engines at first glance: high demands for function and aerodynamics are combined with innovative aesthetics in the unmistakable purpose design,” Mercedes observes of the sedan.

The EQS also will feature an AMG Line variant, which is the two-tone one seen in the promotional image below. Its front and rear bumper fascias differ aesthetically from the original, but it’s unclear if the aerodynamics are much different functionally. 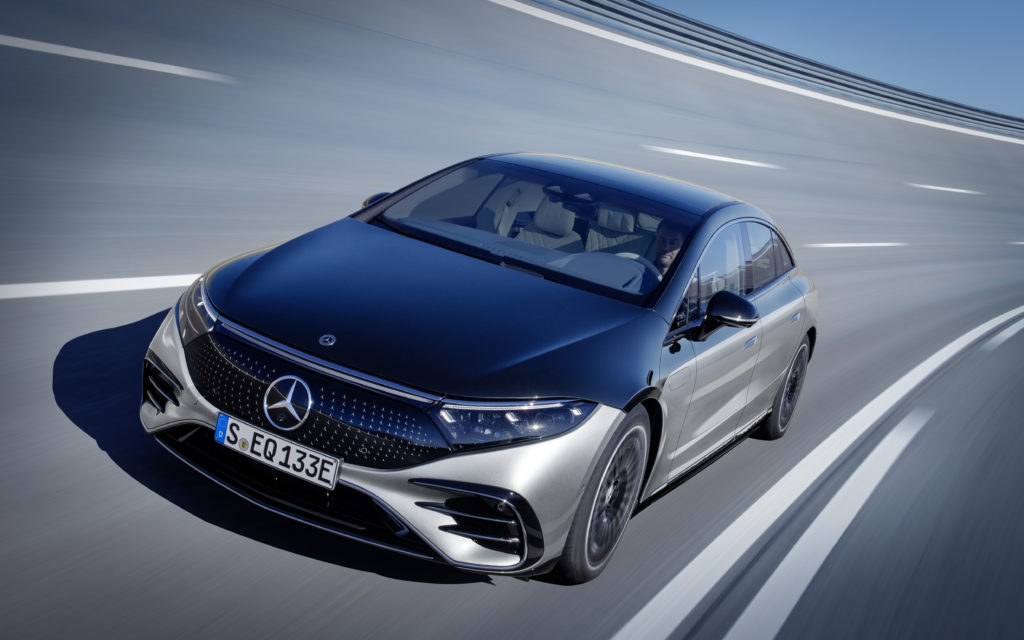 Mercedes said the lack of powertrain sound on an electric vehicle like the EQS means “wind noise is particularly noticeable by the occupants.”

Mercedes’ efforts to combat this and other noise would definitely seem to be a factor in auto body repair.

Mercedes said it cut high-frequency wind noise by “specific measures taken on the door and window seals. Special attention was paid to the sealing of the transitions between the six side windows.”

The vehicle also has a standard panoramic roof, and Mercedes said it fought the noise here too with “various wind deflection measures (wind deflectors, covers and seals with optimized geometry)”

EQS owners can upgrade to acoustical windows as well, according to Mercedes. “As an additional option, laminated safety glass panels at the side and rear provide additional acoustic and heat protection,” Mercedes wrote. “The optional acoustic glass mainly reduces wind noise even further, but also does so for noises coming in from the outside (for example, tire noise or passing/oncoming vehicles).”

Other seals were “noise-optimized” as well, according to Mercedes, which cited those on the window support, side-view mirrors and flush door handles.

The A-pillar pulls triple duty, according to Mercedes. “A further contribution was made by the newly developed A-pillar with a specially shaped piece of trim at the transition to the windscreen,” the OEM wrote. It said the design improved aerodynamics, cut noise and reduced the amount of dirt on the windshield.

Moving inside the vehicle, Mercedes said an “Acoustic Comfort Package” comes standard and “includes additional insulation measures” within the EQS. 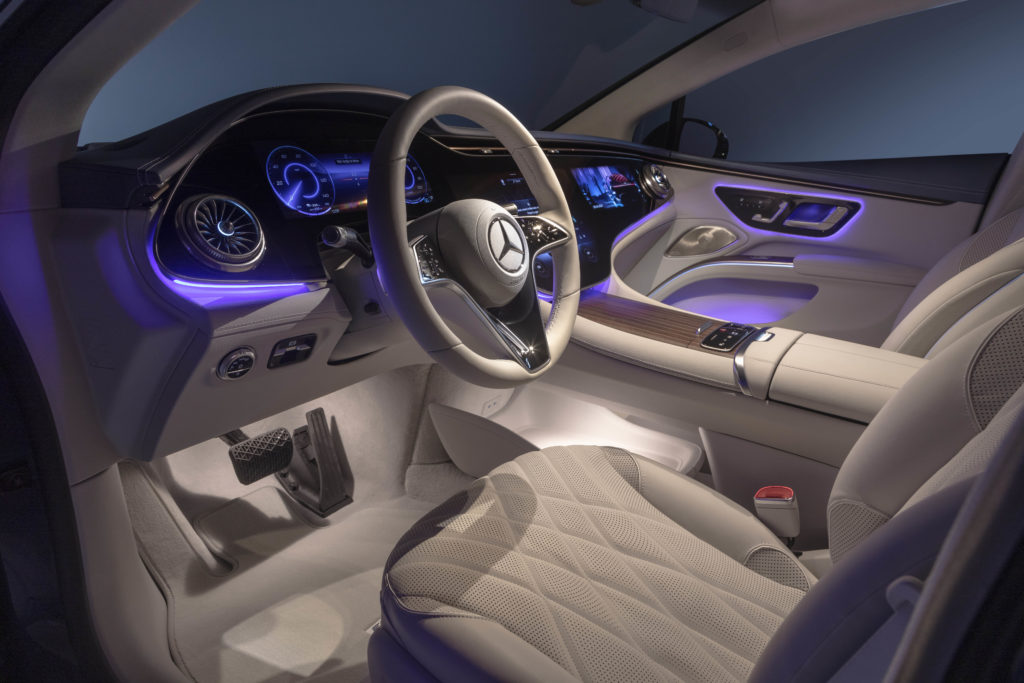 Foam will also make an appearance.

“New solutions had to be found due to the concept-related lack of a partition between the interior and the trunk and the aluminum alloys used in many places,” Mercedes wrote. “Low-frequency noise, which can be perceived as reducing comfort, is prevented by filling numerous cavities in the body with acoustically effective foam.”

The OEM also said it installs acoustic foam “into many carriers as early as the shell construction stage.”

The “eATS” electric powertrains themselves “have a special foam mat all around,” and the battery lid seal contains a “foam sealed in foil.” The latter is “clamped between the battery and the floor and prevents excitation.”

Other noise-reduction efforts within the body include:

Mercedes said it decoupled the eATS powertrain parts from the body with elastomer bearings.

“Highly effective spring/mass components provide continuous sound insulation from the cross-member under the windscreen to the floor of the trunk,” the OEM said. The OEM also stuck acoustic dividers in the tailgate.

The floor structure itself has itself has “beads” to cut sound. “These prevent resonance of the surface and thus the occurrence of a corresponding structure-borne sound,” Mercedes wrote.

It’s unclear when the EQS will go on sale in the United States, but it’ll be available in Europe this year. 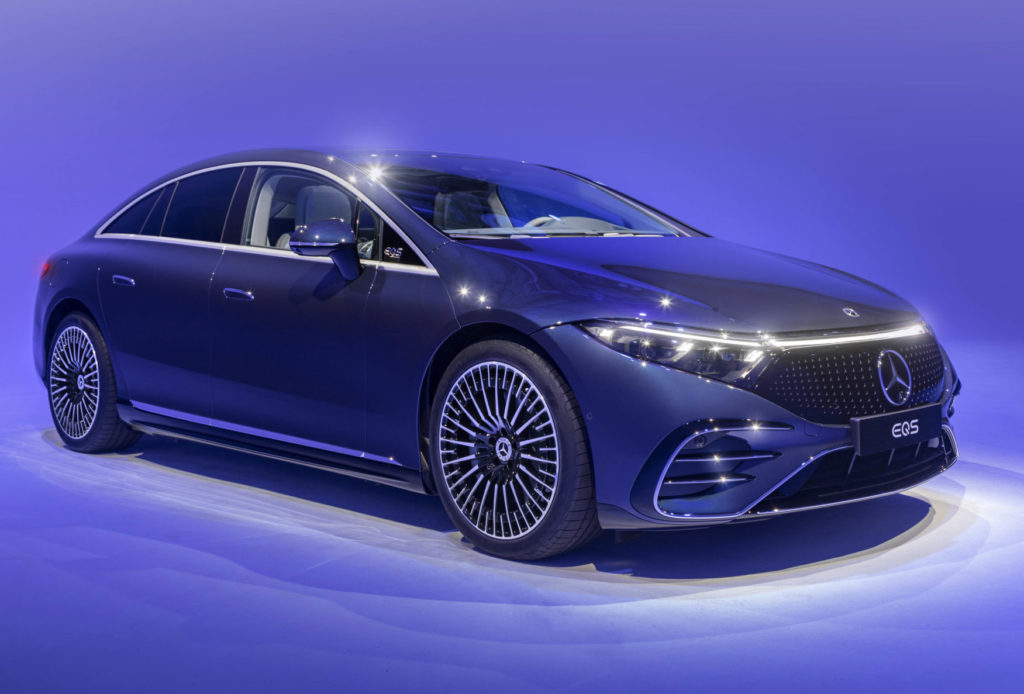 “The EQS: the first electric vehicle in the luxury class”

A 2022 Mercedes EQS Edition 1 is shown. (Provided by Mercedes)

The interior of a 2022 Mercedes EQS Edition 1 is shown. (Provided by Mercedes)