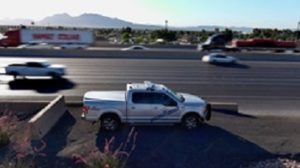 The traffic management firm collaborated with the Nevada Highway Patrol, Nevada Department of Transportation and the Regional Transportation Commission of Southern Nevada on the yearlong project, which was funded by a National Safety Council grant. Waycare said the findings represent a $3 million economic gain and a 16x return on investment.

“Waycare’s innovative program has shown real promise in helping improve traffic safety across Southern Nevada,” NDOT Director Kristina Swallow said in a statement. “As NDOT continues to build wireless infrastructure throughout Nevada, programs leveraging crowdsource technology such as Waycare may prove to be a cost-effective strategy in providing quick and proactive incident response.”

Waycare’s artificial intelligence can study local data and determine which times of day and parts of roads are more likely to yield crashes. After crunching the data for Southern Nevada, the firm and the agencies concentrated on northbound Interstate 15 near Russell Road, southbound I-15 near Lake Mead Boulevard and southbound US 95 near Jones Boulevard.

NHP troopers periodically manned strategic locations near the areas flagged as high-risk, while transportation commission signs in the area warned motorists about the law enforcement.

“Waycare developed a new algorithm that ingests historic traffic data, speed sensor data, and aggregated connected vehicle data, to provide month-to-month recommendations for the sites and time periods that would be most beneficial for troopers to be present at the (strategic traffic management sites),” Waycare wrote in a white paper. “NHP referenced these suggestions to assign troopers to different STMS locations in two to three hour shifts at various times. To avoid public habituation to NHP presence, the troopers activated different STMS sporadically and at varying times.”

In addition to fewer crashes and speeders, the program led to the average speed falling by 2.76 percent from 62 mph to 60 mph. It also smoothed out traffic, according to Waycare.

“Finally, the average standard deviation of the distribution of speeds decreased by 9%, suggesting the program improved traffic harmonization across the corridors,” Waycare wrote.

The study ran from October 2019 to December 2020. Because of COVID-19’s disruptive external impact upon on traffic patterns, the project couldn’t compare 2020 traffic against 2019’s. The research instead compared the data from when the traffic safety efforts were active to the results when they weren’t.

“The combination of emerging technologies together with the collaboration of law enforcement has proven to be successful in enhancing safety, preserving capacity and effectively communicating with Southern Nevada drivers,” Regional Transportation Commission CEO M.J. Maynard said in a statement. “The use of AI-based insights helped identify potential target areas, allowing us to increase safety and plan for preventative actions in the future.”

The project was only shooting to reduce crashes by 5 percent, so the fact that it returned an 18 percent decline doesn’t bode well for collision repair volume. And Waycare was confident the process “can be scaled and applied to other geographic areas in a similar manner.” It continued:

The cost/benefit analysis suggests that expansion of the program across other regions in Nevada is a highly cost-effective strategy to combat traffic injuries and fatalities.

Finally, it is important to consider future applications of the proactive crash prevention strategy exhibited by the Road to Zero program. Technology played a crucial role in the project, giving the partner agencies both the insights into high-risk locations, and the ability to communicate with one another in real-time. There is tremendous growth in the ability to collect and operationalize data, especially through the use of AI. Combined with the expansion of connected vehicles in the market, cities will be able to understand their roads better than ever before and employ new proactive strategies to prevent crashes. As our physical infrastructure turns digital, informing drivers in real-time and eventually informing the vehicles directly of high crash-risk corridors will drive us closer to our goal of zero fatalities on our roads.

“Educating drivers and changing roadway design is not enough to combat the rising number of fatalities on our roads,” Waycare CEO Noam Maital said in a statement. “AI offers an opportunity to change the rules of the game – we can leverage predictive analytics to proactively prevent crashes. The Road to Zero program should serve as a blueprint for scalable and effective future strategies combining both technology and interagency collaboration.”

On the other hand, while the project trained motorists to drive slower even when troopers weren’t present, “drivers tended to return to their previous speeds after exiting the STMS corridor regardless of trooper presence or not.” So there’s still some human nature left to provide body shops with crashes.

“Southern Nevada Road to Zero Program: A Comprehensive Report on the Impact and Economic Savings of Predictive Analytics and Preventive Activities on Driver Speed and Vehicle Crashes in Las Vegas”

Featured image: A “strategic traffic management site” on southbound Interstate 15 in Nevada is shown. The location was used in a yearlong traffic safety initiative involving Waycare, the Nevada Highway Patrol, the Nevada Department of Transportation and the Regional Transportation Commission of Southern Nevada. (Provided by Waycare/PRWeb)