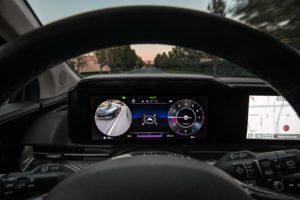 Kia America will be providing vehicle build data to insurers through an agreement with LexisNexis, the analytics provider has announced. The arrangement will potentially allow owners to benefit from their vehicles’ advanced driver assistance systems (ADAS) when they shop for insurance.

The agreement underscores the growing acknowledgement among insurers and others that ADAS technology helps prevent collisions, a trend that could reduce business for repairers as such technology becomes more widespread.

The platform, LexisNexis Vehicle Build, provides normalized data about ADAS features in specific Kia vehicles in order to help insurers in insurance rating and underwriting. This level of detailed information is not ordinarily conveyed through a manufacturer’s vehicle identification number (VIN), but is included in factory build data.

Because there is no standard for ADAS technology, with different manufacturers using their own proprietary names for similar features, LexisNexis “normalizes and standardizes” the features for underwriters’ use.

LexisNexis gives “normalized name and definition” for each ADAS feature in its database, which can be used in conjunction with the company’s standardized return. In addition, it uses a classification system to refer to groupings of features that are common across automobile manufacturers.

Like most manufacturers, Kia offers a variety of ADAS features as standard or optional equipment on a model-by-model basis. For instance, on the base Kia Rio subcompact, the manufacturer’s lowest-priced model in 2021, all of the ADAS features, labeled Drive Wise by Kia, were extra-cost options.

In contrast, on the 2022 Kia Carnival, a full-sized SUV, no fewer than 21 ADAS systems are listed. Of those, only eight are included as standard equipment on all trim levels; the rest are available only on particular models.

“With newfound underwriting data available through LexisNexis Vehicle Build, guesswork involving a vehicle’s ADAS features is now a thing of the past, and we look forward to continuing to bridge the automotive and insurance markets so consumers can shop for auto insurance in a new and empowering way,” Adam Hudson, vice president and general manager, U.S. Connected Car, at LexisNexis Risk Solutions, said in a statement.

On its website, LexisNexis said that Vehicle Build offers insurers the following benefits:

LexisNexis’ announcement does not offer any detail about the effect on losses that each ADAS feature might be expected to have. Instead, it offers copies of its proprietary classification system to those carriers that want to incorporate ADAS data into their rating algorithms.

Vehicles equipped with ADAS have been linked to reduced accidents. In June, Ford and State Farm announced the results of a yearlong study based on vehicles’ build data. That study found that the presence of advanced driver assistance systems lowered the insurer’s risk.

That analysis of build data showed that the ADAS features installed on some Ford, Lincoln and Mercury vehicles dating back to 2010 were effective enough to justify lower rates for their owners.

“We’re finding solutions for the future by grounding everything in data, research and insights,” State Farm Vice President of Operations Craig Isaacs said at the time. “What’s unique about this project is we’re not just looking at the make and model of a vehicle, but ultimately to the individual safety features on each vehicle.” 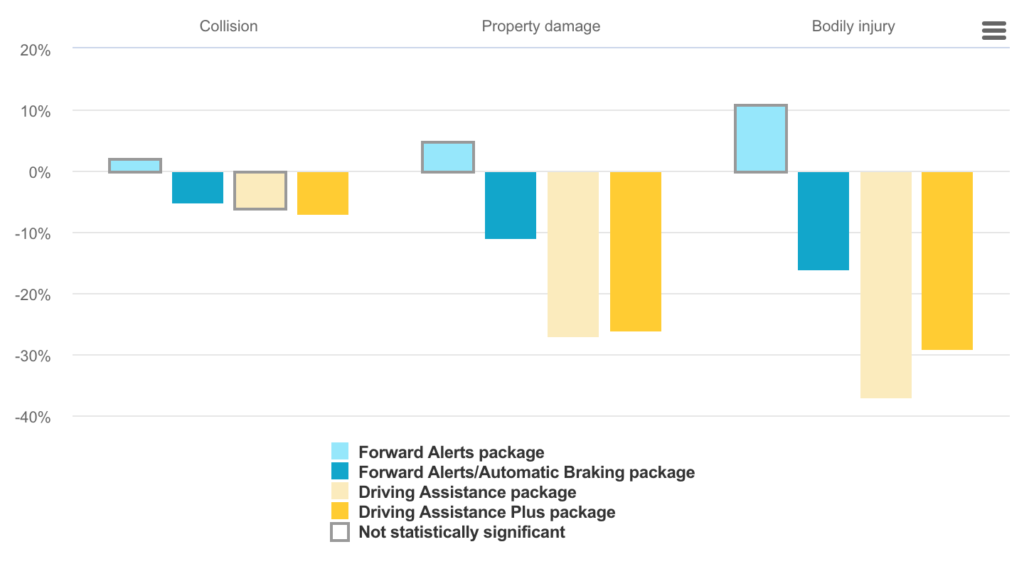 In the results of a study announced in April 2020, the Insurance Institute for Highway Safety (IIHS) found that model year 2013-17 BMW automobiles were less likely to be involved in crashes if they were equipped with certain types of ADAS.

The IIHS analysis of insurance claims data found that the combination of improvements in front crash prevention and the addition of adaptive cruise control greatly reduced the frequency of property damage liability and bodily injury liability claims. Lane centering, on the other hand, seemed to have little impact on claims.

For each package, HLDI examined the collision, property damage liability and bodily injury liability claims per insured vehicle year. Three of the four packages were associated with reductions in claim rates under the three coverages.

Package two, the combination of forward collision warning, lane departure warning and AEB, reduced the frequency of collision claims by 5%, property damage claims by 11%, and bodily injury claims by 16%

Package three, which added adaptive cruise control to the mix, cut collision, property damage and bodily injury claim rates by 6%, 27% and 37%, respectively. For this package, the reduction in collision claim frequency was not considered statistically significant.

The effects of package four on claims were not statistically different from those of package three.

IIHS said BMW provided a good opportunity for such a study, because so many of its vehicles were equipped with each of the four different packages.

“The crash claim frequency reductions for BMW’s Driving Assistance package are the largest we’ve seen from advanced driver assistance systems, which suggests crash avoidance may be delivering bigger benefits as the technology improves,” says Matt Moore, senior vice president of HLDI, said in an April 16, 2020 announcement on the IIHS website.

In an undated article for Youtalk-insurance.com, Carla McDonald of LexisNexis Risk Solutions alluded to the company’s work in Europe to measure the dollars-and-cents effect that various types of ADAS technology have.

“Starting with ADAS, insurance providers need to understand the impact of these valuable and effective systems on claims frequency to help calculate pricing,” McDonald wrote. “However, deciphering the precise specification on a new vehicle is very complex with a variety of standard and optional features that will include ADAS.”

After creating a classification system for these safety features, the next step was “testing and learning how ADAS fitments relate to insurance claims,” she wrote. The result of that work, involving more than 2.5 million vehicles in four European countries, is now available to European customers, she said.

“Ultimately customers will have the most to gain by paying insurance based on the exact features on their car and how they drive it, which in turn can help reduce cost of ownership and make all our roads safer,” McDonald concluded.

Featured image: the dashboard of the 2022 Kia Carnivale.