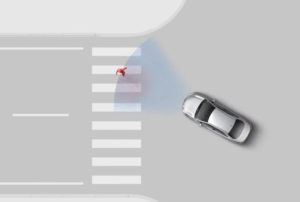 Toyota and Honda have each expanded their commitment to collision reduction technologies, announcing near- and long-term developments in their advanced driver assistance system (ADAS) system offerings.

Toyota has announced the launch of T-Mate, a name that groups together all of its safety and ADAS technology. T-Mate incorporates the latest Toyota Safety Sense (TSS) package, which the automaker said has been improved in a number of ways.

Meanwhile, Honda has announced that will expand its onmidirectional Honda Sensing 360 technology to all models built for major markets by 2030, and made a commitment to eliminate fatal collisions involving its vehicles by one-half by 2050.

Both announcements seem to indicate that the automakers will continue to rely on cameras and radar units for their ADAS systems, as they make no mention of lidar or other technologies.

Toyota said that T-Mate, which will be introduced in Europe before being offered in other markets, differs by individual models and grade or trim levels. It combines TSS with other functions that improve safety for vehicle occupants and other road users.

Toyota said it has also added an Emergency Driving Stop System (EDSS) to TSS, and enabled over-the-air updates — which means that functions may be added to or improved over the course of the vehicle’s life. This makes it critically important that repairers rely on OEM data when repairing and calibrating a Toyota vehicle with TSS.

TSS, which is included on virtually all Toyotas in North America, uses a camera mounted at the top of the windshield and a radar unit, usually mounted in the grille or front bumper. Some TSS versions also use radar units mounted at the rear of the vehicle.

Meanwhile, Honda’s promised expansion of Honda Sensing 360 to all models by 2030 is part of the OEM’s efforts to reduce collisions and fatalities, which also include the use of artificial intelligence (AI)-powered technology.

The recently unveiled Honda Sensing 360 is an enhanced version of the current Honda Sensing ADAS system. The new system, launched in October, will further advance their capabilities with an omni-directional sensory range made possible by the integration of inputs from five advanced millimeter-wave radar units around the vehicle, in conjunction with a monocular camera similar to that already used by the current Honda Sensing systems.

Acura will also have a version of Honda Sensing 360, called AcuraWatch in North America.

Honda is also pursuing two next-generation technologies. The first is an AI-powered “Intelligent Driver-Assistive Technology” that uses information about the driver and the environment to reduce driving errors and risks. This would work in conjunction with the vehicles’ ADAS systems. 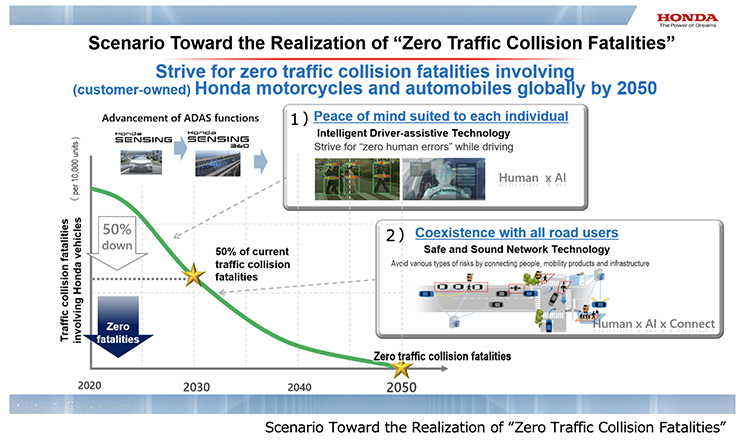 With the Intelligent Driver-Assistive Technology, “Honda has unraveled the factors behind human errors through its original fMRI*2-based study of the human brain and analysis of risk-taking behaviors,” the OEM said in a statement.

“The system presumes predictors of driving errors based on information obtained through a driver monitoring camera and pattern of the driving operations. This technology is being developed to enable each individual driver to mitigate driving errors and enjoy mobility without any sense of anxiety. ”

The second, called “Safe and Sound Network Technology,” envisions all road users connected with one another through telecommunications, alerting them to risks before a collision can occur.

The “Safe and Sound” technology would identify potential risks in the traffic environment based on information obtained from roadside cameras, on-board cameras and smartphones, aggregated in a server to reproduce that traffic environment in the virtual space.

“In that virtual space, in consideration of the conditions and characteristics of each individual road user, the system predicts/simulates the behaviors of road users at high risk of a collision. Then, the system derives the most appropriate support information to help the road users avoid risks,” Honda said.

It said that the information would be conveyed through a “cooperative risk HMI (human-machine interface).” The target date for implementation of this technology is after 2030.

An advertisement for the Toyota Safety System. (Provided by Toyota)

“Toward the Scenario of Zero Traffic Collision Fatalities.” (Provided by Honda)