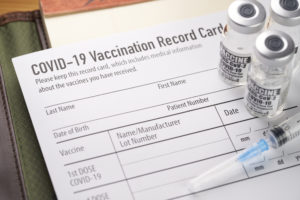 Many trade groups are calling the Supreme Court’s stay on President Joe Biden’s federal mandate to require COVID-19 vaccinations or testing at businesses with 100 or more employees a win for small businesses.

Implementation and enforcement of the Occupational Safety and Health Administration’s (OSHA) COVID-19 Vaccination and Testing Emergency Temporary Standard (ETS) is pending further review by the U.S. Court of Appeals for the Sixth Circuit on the merits of the case, according to The National Law Review.

“OSHA has never before imposed such a mandate. Nor has Congress,” the Jan. 13 Supreme Court opinion states. “… The question before us is not how to respond to the pandemic, but who holds the power to do so. The answer is clear: Under the law as it stands today, that power rests with the States and Congress, not OSHA.”

Justices Stephen G. Breyer, Sonia Sotomayor and Elena Kagan wrote in a joint dissent that the ETS falls within the core of OSHA’s mission “to ‘protect employees’ from ‘grave danger’ that comes from ‘new hazards’ or exposure to harmful agents.”

“In our view, the Court’s order seriously misapplies the applicable legal standards. And in so doing, it stymies the Federal Government’s ability to counter the unparalleled threat that COVID–19 poses to our Nation’s workers. Acting outside of its competence and without legal basis, the Court displaces the judgments of the Government officials given the responsibility to respond to workplace health emergencies.”

The Associated Press reported that Biden said he was “disappointed that the Supreme Court has chosen to block common-sense life-saving requirements for employees at large businesses that were grounded squarely in both science and the law.”

He called on businesses to institute their own vaccination requirements, noting that a third of Fortune 100 companies already have done so, according to the AP.

U.S. Secretary of Labor Marty Walsh said in a statement he was “disappointed in the court’s decision” and called it a “major setback to the health and safety of workers across the country.”

“OSHA stands by the Vaccination and Testing Emergency Temporary Standard as the best way to protect the nation’s workforce from a deadly virus that is infecting more than 750,000 Americans each day and has taken the lives of nearly a million Americans,” he said. “… The commonsense standards established in the ETS remain critical, especially during the current surge, where unvaccinated people are 15-20 times more likely to die from COVID-19 than vaccinated people. OSHA will be evaluating all options to ensure workers are protected from this deadly virus.”

CNN reported 27 trade associations presented oral arguments before the court against the mandate.

“By stopping this mandate from taking effect, the Supreme Court has freed small businesses to focus on bringing the American economy and labor market back to their pre-pandemic peak,” the Job Creators Network (JCN) wrote in a statement. “The court confirmed what JCN has long argued: OSHA does not have the authority to implement this sweeping regulation that will burden American businesses, including many small businesses, with new costs and exacerbate the historic labor shortage.”

The National Federation of Independent Business (NFIB), which filed a lawsuit against OSHA’s vaccine mandate, applauded the Supreme Court’s stay.

“As small businesses try to recover after almost two years of significant business disruptions, the last thing they need is a mandate that would cause more business challenges,” said Karen Harned, NFIB Small Business Legal Center executive director in a statement. “We are pleased the Supreme Court stopped the rule from taking effect while the courts consider whether or not it is legal. We are optimistic that the courts will ultimately agree with us that OSHA does not have the emergency authority to regulate the entire American workforce.”

The U.S. Census Bureau conducts a weekly nationwide Small Business Pulse Survey, which found between Jan. 3-9, 29.5% of businesses within the sector that includes automotive repair required employees to have proof of COVID-19 vaccination prior to coming to work. The national average of all sectors was 22.1%.

The survey used the Small Business Administration’s definition of small business to conduct the survey. The SBA uses a table of size standards to determine if a business can be classified as small. Size standards are defined by number of employees or average annual receipts and the definition of small varies by industry, according to the SBA. Small business by firm revenue ranges from $1 million to over $40 million and by number of employees from 100 to over 1,500 employees.

The Court did, however, uphold the Health and Human Services rule that requires COVID vaccination for all employees of health care providers that participate in Medicare and Medicaid.

“Vaccination requirements are a common feature of the provision of healthcare in America: Healthcare workers around the country are ordinarily required to be vaccinated for diseases such as hepatitis B, influenza, and measles, mumps, and rubella,” the Court’s opinion states. “… The challenges posed by a global pandemic do not allow a federal agency to exercise power that Congress has not conferred upon it. At the same time, such unprecedented circumstances provide no grounds for limiting the exercise of authorities the agency has long been recognized to have.”