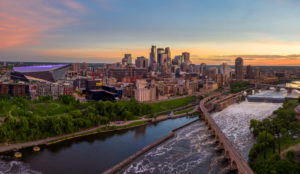 Minnesota collision repair parts sales could soon contribute to road and bridge construction and repairs in the state if two Senate bills are signed into law.

Senate File 3081 would divert 100% of auto repair services and parts sales tax revenue, adding up to more than $300 million a year to the highway user tax distribution fund (HUTDF). Right now, the tax revenue is split up between the HUTD, debt service, general, agricultural, and economic funds. Senate File 3086 proposes putting 76% of the revenue stream in the HUTDF and 12% each in the small cities assistance and town roads accounts, which bill sponsor Sen. Jeff Howe (R-Rockville) called “property tax relief in its finest form” for residents.

The Senate Taxes Committee unanimously recommended passage of the bills and referred them to the Senate Finance Committee on March 1.

During the Taxes Committee meeting, sponsor Sen. Scott Newman (R-District 18) said prior to 2017, all sales tax revenue from auto parts and service was dedicated to the general fund whereas now only a set amount of the revenue stream of $145 million a year is dedicated to the HUTDF.

“I’m not thinking about this budget or the next budget or the budget after that,” Newman said. “I’m thinking of the year 2030 or 2050. We are in trouble. …Just think about the gas tax. The gas tax pays currently approximately one-third of all of the funds that go into HUTDF and I’m telling you, it’s a dying stock. With the advent of electric vehicles and the improvements to the internal combustion engine, gas tax revenue is projected to decline sharply beginning around 2024 or 2025. We simply cannot afford that.”

Newman noted that the Minnesota Department of Transportation has predicted an $18 million deficit in funding for roads and bridges. The department’s “20-year State Highway Investment Plan 2018-2037,” released in 2017, estimated it will only have $21 billion of the needed $39 billion to invest in the state highway system.

“When we have a problem and business and labor come to the capital united on how to solve a problem it’s a train that’s hard to stop,” Committee Member Sen. Tom Bakk (I-District 3) said.

He added that there is a $9 billion surplus in the current biennium and, of that, less than 2% would go to transportation.

“The gas tax has been a declining source of revenue since I arrived in the legislature and that was in 2003,” said Committee Chair Carla Nelson, R-District 26. “…This is a very innovative way to keep up with modern needs.”