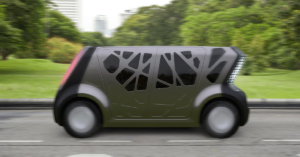 Global engineering firm Ricardo has designed a self-driving battery electric vehicle (BEV) that it says can be built on conventional assembly lines and repaired by body shops with existing techniques.

Ricardo’s designs for SEM1 (Steel E-Motive) and the slightly longer SEM2, presented at the Great Designs in Steel conference in Novi, Michigan on May 18, make extensive use of advanced high-strength steel (AHSS) for lightness, strength, and crash performance. Conceived as mobility as a service (MaaS) products, also called robotaxis, the vehicles could be ready to enter into production by 2030.

The Steel E-Motive project is a response by Ricardo and WorldAutoSteel, the automotive group of the World Steel Association, to an anticipated growing demand for MaaS vehicles. It gives technicians a glimpse at what they might be repairing in the not too distant future.

“In the past four years, we’ve conducted extensive research into global trends such as urbanization and disinterest in vehicle ownership among the young and the elderly,” George Coates, a project coordinator with WorldAutoSteel, said. “This is especially prevalent in megacities … that these days are characterized by pollution, congestion, limited parking, and enormous [vehicle] ownership costs.

“Our research concludes that mobility as a service, MaaS, will grow exponentially in these high-population areas, and will place a significant challenge on new vehicle design and manufacturing,” Coates said.

He said that most autonomous BEV concepts that have been introduced use “alternative materials that just don’t make sense for the mobility fleet operator, or for the user. So the global steel industry is investing significantly in product and fabrication development to prepare for this revolution.”

Neil McGregor, chief engineer for Ricardo, said that to keep the vehicle affordable, “the body has been designed with conventional fabrication and assembly processes in mind. So it can go down a conventional manufacturing facility with minimum investment.”

By the same token, the SEM should present no new challenges to collision repairers, McGregor told Repairer Driven News. 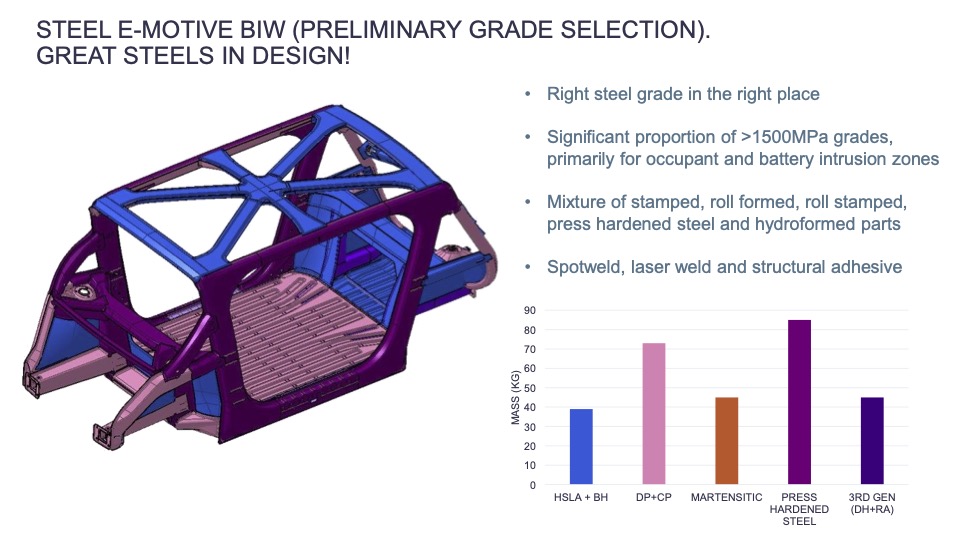 “We’ve got a mixture of stamped, roll formed, roll stamped, press hardened, and hydroformed parts in the body,  using conventional spot welding, laser welding and structural adhesive,” he said. With more than 60 grades of AHSS available, “we’ve been blessed with a very good materials portfolio…. Really, it’s all about putting the right steel in the right place.”

To maximize ease of ingress and egress on a relatively short wheelbase, SEM uses scissor doors, and does away with the conventional B-pillar, building that structural strength into the doors themselves.

The concept’s core is an innovative battery design that reduces weight without sacrificing safety, McGregor said. The battery modules, along with their cooling system and power distribution units, are mounted into a separate steel carrier frame, which is “stuffed up into the vehicle” during assembly.

The vehicle’s floor doubles as the battery cover, while an AHSS plate underneath the batteries provides protection against debris and collision damage, while contributing to body stiffness.

“Usually, with open pod-type structures, you might get some issues with body stiffness,” McGregor said. “We’ve managed to overcome that and achieve quite a competitive stiffness and NVH (noise, vibration, and harshness) mode performance.

“We went through appropriate designing of the section sizes, profiles, maximizing part integration, and really focusing on the flange of the joint design,” he said. “We tried to put the chassis attachment points in strategic locations in the structure. So, for example, the strut towers are nice and neatly tucked in and integrated into the A pillar, and a large lateral crossmember across the struts gives us good stiffness.” 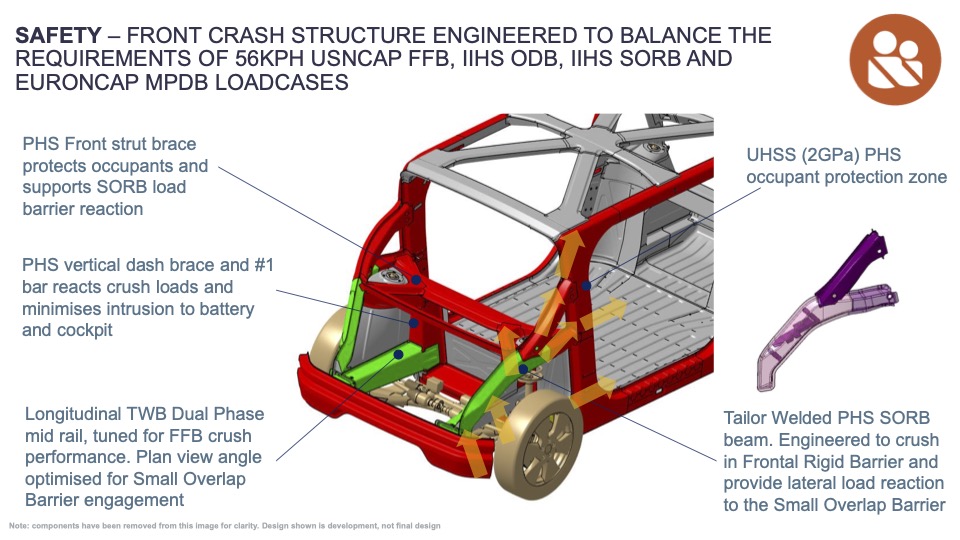 One of the biggest challenges of the SEM project, McGregor said, has been meeting the front crash targets. “This is particularly challenging on this car with such a small front end, a small front overhang. But nevertheless, we’ve achieved that,” with a good rating from the Insurance Institute for Highway Safety (IIHS) in the small overlap test.

One key to meeting small-overlap standards, he said, was to “try to get the vehicle to what we call ‘glance off’ the barrier. So as a vehicle hits the barrier, it actually bounces off …This reduces the amount of kinetic energy that’s converted to crash energy.” To achieve this, engineers designed the front wheel to detach when it hits the fixed barrier, so that it doesn’t intrude into the passenger compartment.

A different approach was needed to pass tests involving a crash into a rigid barrier that covers the full width of the vehicle. McGregor said a tailor-welded, press-hardened steel (PHS) beam was engineered to provide a combination of strength, crush and intrusion prevention, using steels of 1,500, 500, and 2,000 mega Pascals (MPa), a measure of tensile strength.

The forward seats in the SEM are rear-facing, which presents challenges in crash protection. “Essentially, [with a forward collision] we’re dealing with a high-speed rear impact on that occupant. Most of most requirements and tests on rear impact get up to about 10 G. On this, we’re kind of in the region of 19 to 30 G.” 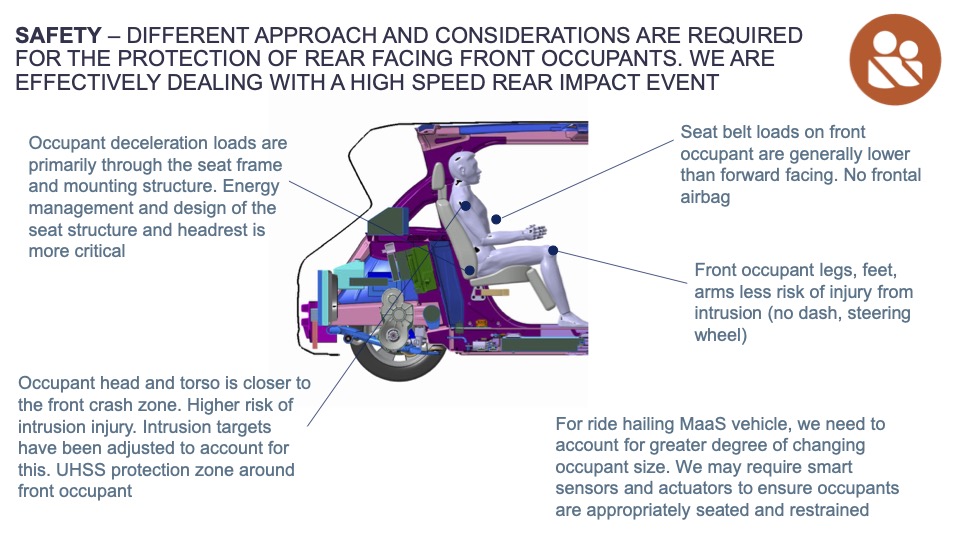 In this case, the seat “does the work of decelerating the occupant, the seat and the headrest. So the design of the seats and the headrest are important.” At the same time, loads on seat belts are much lower, and there’s no steering wheel for an occupant to strike, reducing the risk of injury to arms and legs.

To help absorb the energy of side impacts, the rockers incorporate a two-piece, roll-formed DP590 hex beam to provide “a very small crash zone,” McGregor said. More than 30 millimeters of static clearance between the battery and the rockers helps protect the battery from damage, he said. 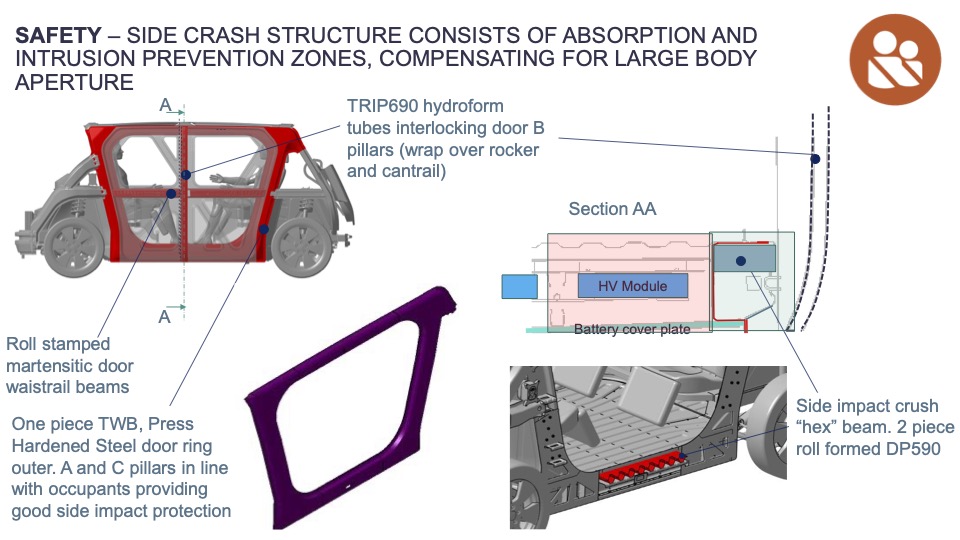 The SEM is designed for SAE Level 5 autonomy, capable of driving itself in mixed traffic, with no controls provided for the occupants. It would be able to operate “with minimum infrastructure changes, so there won’t be need for geofencing,” McGregor said. “They just need facilities like 5G connectivity.”

He said Ricardo has taken a comprehensive approach to determine the environmental sustainability of the concept, taking into account everything from the production of the steel to the generation of the electricity it will use to the vehicle’s eventual recycling. Further details on sustainability will be coming as the project progresses, he said.

Featured image: A rendering of SEM1 is shown. (Provided by Ricardo)

All other images provided by Ricardo