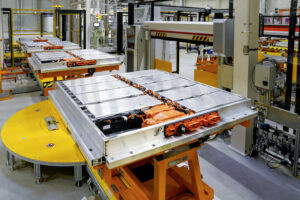 Scott Keogh, chief executive of Volkswagen Group of America, told an Automotive News forum in Washington that America’s production of lithium-ion batteries, currently at 150,000 to 200,000 per year, will have to increase to 8.5 million in seven years to meet the projected need.

“This is a scale of investment that honestly is going to make the Industrial Revolution look like a cakewalk. It’s massive,” Keough said.

OEMs, in partnership with battery manufacturers, have announced investments totaling tens of billions of dollars in new battery plants and EV assembly plants in North America as the industry and the nation shift away from internal combustion engine (ICE) vehicles. President Joe Biden has set a goal of 50% of new-vehicle sales being plug-in hybrid or all-electric by 2030.

“America’s focus, I think, obviously needs to be focused on batteries because that’s the kind of stuff you can’t ship around the world,” he said. Other necessary components, such as semiconductors, can be sourced through global trade at much lower prices, he added.

One hurdle is building “a collective ecosystem [for] turning America into a manufacturing society again,” he said. “I think America has become a service economy, if we’re honest with ourselves, and the challenge of getting somebody who’s been working at a Starbucks, taking 20 minute breaks, smoking a cigarette out back, and is now jumping into a factory …is a whole new world.

“It’s easy for someone like me, or someone in this room, to say ‘Yeah, manufacturing — it’s awesome.’ OK, go to work in a factory. You know, we throw [around] this term three shifts – three shifts is a beautiful thing. What exactly three shifts means is that someone’s working at three o’clock in the morning. …This is brutal, difficult, challenging work.”

EVs ‘a bet worth making’

Keough said Volkswagen’s decision to invest in North American production of its all-electric ID.4 SUV was “a bet worth making” with anticipated production of 7,000 to 8,000 vehicles a month at its Chattanooga, Tennessee assembly plant.

With Volkswagen’s German assembly plants facing European demand that’s four times their capacity, and unable to provide vehicles to the U.S. market, Chattanooga was “probably one of the biggest corporate bets… that was made,” he said.

Keough said he does not expect the global chip shortage to greatly affect US ID.4 production. “The good news, when you look at the group rules on the allocation of chips, obviously it starts with profitability. So a lot of the luxury brands get access to the chips. But then the next tier is if you have a new electric car and a factory. So, good news is we will be getting the chips in that plant. We’ll get the cars.”

Keough said OEMs are in “a tricky position,” because the consumer demand they’re counting on relies in part on factors they don’t control, such as the availability of charging stations.

“I think the demand factor has been there, and has been strong,” he said. “My read on infrastructure, the reason I’m less rattled is I think that if there’s any one thing America is good at, it’s pursuing a business opportunity.

“I see it every day with Electrify America. I see it with the different brands. And I think the investor will be there to pursue a business opportunity. So I’m less concerned on that front perhaps then than others,” he said.

Two factors are working against the broader adoption of EVs, Keough said: Affordability and families’ need for vehicles with three-row seating.

Producing an EV with a sticker price of $20,000 “is going to be immensely challenging, regardless of what scaling effect you’re able to get with the cost environment that we see with commodities and everything else,” he said.

“As you know, the market has moved from an average transaction price of, let’s say $34,000 up to $45,000. I think we know the American consumer’s income has not gone up nearly as much as that. So I think in this environment, we’ve seen probably two to three million Americans walk away from the car market because it’s gotten too expensive.”

Featured image: Manufacturing of the battery systems for the ID.3 and ID.4 at Volkswagen Group Components Braunschweig. (Provided by Volkswagen)