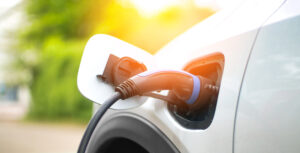 Drivers of electric vehicles (EVs) are more likely to engage in risky behaviors like speeding and hard acceleration, but battery range and climate have an effect on miles driven, according to an analysis published by Cambridge Mobile Telematics (CMT).

Insights like these are “just a start to understanding an electrified future,” CMT, the world’s largest telematics service provider, said in the analysis, “Do Electric Vehicles Make Drivers Safer or Riskier?”. It said the data can be used to segment risk exposure, driver behavior, and claims for ICE vehicles, hybrids, and EVs.

“As major auto manufacturers and many governments announce aggressive goals for total fleet electrification, the work of understanding EV risk only grows in importance,” CMT said.

EVs “display unique risk factors that are distinct from internal combustion engines (ICE) vehicles,” the report said. “The research highlights a number of key differences across vehicle types. For example, we found that Tesla drivers demonstrate acceleration risks that range from 346% to 406% higher than the average ICE vehicle driver. These Tesla drivers also had 76% more cornering risk. On average, they were 35% less distracted by their smartphones than ICE vehicle drivers,” the report said.

CMT said one if its findings is that a driver’s risk profile can change, depending on what kind of vehicle they’re driving.

The company used its data to research drivers who own and drive more than one vehicle. It found that Tesla drivers are 48% less likely to crash their Tesla than their internal-combustion engine (ICE) vehicle, while Porsche drivers were 55% more likely to crash their Porsche than their other ICE vehicle. Porsches “give us a good comparison to Teslas because they’re a high-performance vehicle at a premium price point,” the report said.

The analysis also found that drivers are 9% less likely to speed in their Teslas than in their ICE vehicles, and are 21% less distracted by their phone — “possibly because they’re interacting with the in-car display instead.”

The results are similar to those from the Highway Loss Data Institute (HLDI) showing that the Tesla Model 3 has a lower frequency of claims compared to similar high-end luxury vehicles. “Across all cars, their research suggests Teslas have higher crash frequency, severity, and total loss costs,” the report says.

One of the most predictive factors of crash outcome, CMT said, is risk exposure. Generally, the more a person drives, the higher their crash risk is. Through data collected by telematics products Advanced Risk, DriveWell Auto, DriveWell Tag, DriveWell SDK, and DriveScape, it was able to focus in on differences of risk exhibited across different lengths of trips.

The analysis also sorted data by vehicle type. Teslas and hybrid vehicles showed a similar risk exposure, both in distance driven and trip duration, while the average trip for a compact EV was 26% shorter in distance and 10% shorter in time than for ICE vehicles, giving them a lower risk exposure.

Weather has an effect on EV risk exposure, too. Compared with ICE vehicles, there’s a 38% likelihood that Teslas are used for trips over 100 miles during the summer in warm climates, and a 52% chance in cold climates. The analysis found a wider difference for compact EVs, which are 70% more likely to be taken on long trips in the summer in cold regions, and 111% more likely in warm regions.

“EV usage can be impacted due to temperature and capacity because many EV models can’t make longer trips without stops,” the report said. “As battery technology advances, and ranges increase, this specific factor could evolve for many EVs. It also may not hold true for EVs with longer ranges today, such as the Mercedes EQS (453 miles) or the Ford Mustang Mach-E (379 miles).” 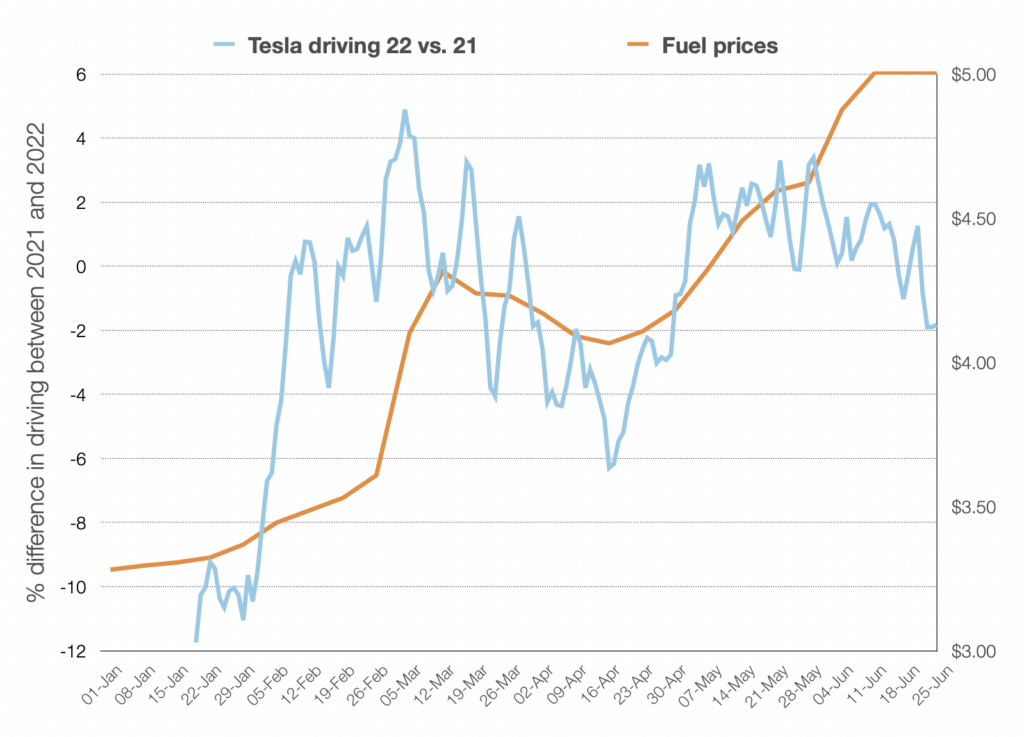 CMT said its data suggests that fuel prices have a direct effect on driving patterns. “As gas prices have increased since February 2022, people who drive both an ICE vehicle and a Tesla began driving their Tesla more frequently. In January 2021, 63% of their trips were in their Tesla. In January 2022, that number held steady at 64%. But since February 2022, Tesla trips have increased to 70% of all trips,” the analysis said. The graph above shows the variation between the daily total mileage (normalized by the number of users who took a trip that day) in 2022 vs. 2021 for Teslas.

At the same time, as gas prices hit $5 a gallon, trips in ICE vehicles dropped over 8% compared to 2021, the analysis said.

EVs, and Teslas in particular, are known for their ability to accelerate quickly, particularly from a standstill. This makes it unsurprising that drivers of compact EVs had an acceleration risk nearly 3 times that of ICE vehicle drivers, while Tesla drivers had a risk 4.5 times higher. The analysis also found found a difference among Tesla models, with the acceleration risk for the Model 3, for example, 5 times higher than ICE vehicles.

“These findings could suggest that EVs are riskier — if we limit the analysis to acceleration risk,” CMT said. “However, the full picture is more nuanced. Harsh braking risk in EVs is similar to ICE vehicles. Hybrids have 8% less hard braking. Compact EVs have 23% more hard braking. Teslas are virtually identical. Cornering risk is also similar among vehicle types.”

There was less variation on speeding risk, another common cause of claims. Tesla drivers speed 7% more than ICE vehicle drivers, CMT said, while hybrids and compact EVs speed less — 18% less and 24% less, respectively.

“We find these results intriguing,” the report concludes. “Our hope is that this high-level analysis will spur additional research into this topic across academic, non-governmental organizations, and road safety professionals to help better understand the evolving safety dynamics of ICE, hybrid, and electric vehicles.”

The research was presented at the Insurance Institute of Highway Safety — Highway Loss Data Institute (IIHS-HLDI) Vehicle Research Center as part of the recent “Charging into an Electrified Future” conference, an insurer-focused event on the impact of electrification on risk analysis. This is CMT’s first publication on EV risk.