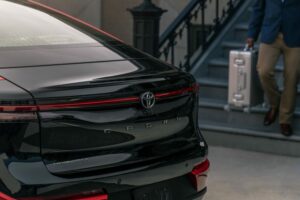 Toyota has announced the return of the Crown — a sedan that was a popular model that first debuted in 1955 as the “Toyopet Crown” and was the OEM’s first mass-produced passenger vehicle, and was last sold in 1972.

Across the 15 generations of Crown, it led the way in innovative technology and will return in 2023, according to a news release from Toyota. The automaker told Repairer Driven News the Crown was brought back because “we saw an opportunity in the U.S. premium sedan segment to introduce a reimagined sedan with bold styling, premium comfort, elevated ride height, great performance, and efficiency.”

When asked for specifics about collision repair procedures, Toyota said more information will be provided about the crown later this year closer to when the vehicles will hit dealership lots.

Buyers will be able to choose from three Crown grades – XLE, Limited, and Platinum, as well as from two hybrid powertrains in the Platinum level – HYBRID MAX or the fourth generation Toyota Hybrid System (THS). THS is “highly efficient” and has a newly developed, high-output bipolar nickel-metal hydride battery that can reach a manufacturer-estimated 38 MPG combined city/highway rating.

“The fourth-generation Toyota Hybrid System in the Toyota Crown combines a high-efficiency 2.5-liter DOHC four-cylinder engine with two electric motors in a highly compact system,” the release states. “The gas engine employs Variable Valve Timing-intelligent by Electric motor (VVT-iE) on the intake camshaft, and VVT-i on the exhaust camshaft. The variable range for the valve timings of both the intake and exhaust are set to maximize both fuel consumption and output.”

The Crown will also be built on a newly developed chassis, based on Toyota’s GA-K platform, which will raise its overall height nearly four inches above the Camry. “The unique height of this sedan offers increased road visibility, along with easy entry and exit,” the release states. The Crown will also come standard with Toyota’s Electronic On-Demand All-Wheel Drive. The XLE and Limited grades will have E-Four AWD and the Platinum grade comes with E-Four Advanced.

“Instead of using a transfer case and driveshaft to the rear wheels, Electronic On-Demand AWD employs a separate rear-mounted electric motor to power the rear wheels when needed,” the release states. “E-Four AWD achieves stable performance by driving the rear wheels with a rear motor, to provide traction when needed in slippery conditions.

The Platinum grade also comes with a standard Adaptive Variable Suspension, which uses variable oil pressure shock absorbers. “This system automatically controls the friction within the absorber when turning, controlling the damping force, reducing pitch at high drive torque and minimizing the effects of bumpy roads. A linear solenoid type actuator is also equipped on the system to minimize body pitch and roll.” The Crown Platinum and Limited grades include a standard panoramic moonroof. “Bird’s Eye View Camera with Perimeter Scan,” which provides a panoramic overhead view of the vehicle’s surroundings, comes standard on the Platinum grade and is an option for the Limited, according to Toyota. The Crown’s standard backup camera features projected path and dynamic gridlines.

The Crown also offers “a wide range of enhanced connectivity and convenience features,” including a 12.3-inch touchscreen, over-the-air (OTA) updates, and voice-activated Intelligent Assistant through Drive Connect. A Wi-Fi Connect subscription offers 4G connectivity for up to five devices. Other connected subscription services will also be available with the Crown, including a one-year or three-year trial to Safety Connect for emergency and roadside assistance, automatic collision notification and assistance, and help locating the vehicle if it’s stolen.

Safety features on the Crown Platinum include Toyota’s Advanced Park System that uses sensors to find open parking spaces and hands-free park for the driver.

All Toyota Crown grades come standard with Toyota Safety Sense 3.0, which includes a pre-collision system and pedestrian, motorcyclist and guardrail detection. The Crown also has radar cruise control, lane departure alert, steering assist, and lane tracing assist. “Lane Departure Alert with Steering Assist is designed to notify the driver via audible and visual alerts and slight steering force if it senses the vehicle is leaving the lane without engaging a turn signal. When DRCC [Dynamic Radar Cruise Control] is set and engaged, Lane Tracing Assist uses visible lane markers or a preceding vehicle to help keep the vehicle centered in its lane.”

Other features include automatic high beam headlights that switch from high to low beams when vehicles are approaching; road sign assist, which shows certain road sign information on the Crown’s in-vehicle display; a reminder for drivers of rear-seat passengers, which operates based on whether a rear door was opened after the vehicle was turned on as well as blind spot monitor, rear cross traffic alerts, and hill start assist control.