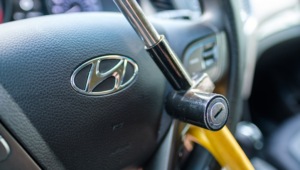 When it comes to theft, the Insurance Institute for Highway Safety (IIHS) has found through its latest research that “bargain-priced” vehicles manufactured by Kia and Hyundai are now at nearly as much risk of being stolen as muscle cars and luxury SUVs — perhaps a fact for repairers to keep in mind when leaving vehicles on their shop lots overnight.

Model year 2019-2021 Kias and Hyundais have a lower rate of theft compared to 2015-2019 models but the Kia Rio, Kia Sportage, Kia Sportage 4WD, and Hyundai Accent are still on IIHS’ list of most frequently stolen vehicles for those model years. 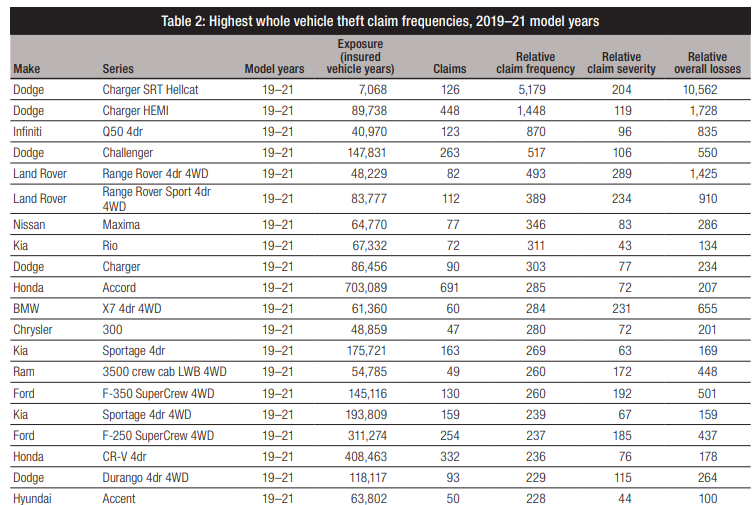 “Car theft spiked during the pandemic,” said HLDI Senior Vice President Matt Moore, in a news release. “These numbers tell us that some vehicles may be targeted because they’re fast or worth a lot of money and others because they’re easy to steal.”

Several 2015-2019 Kias and Hyundais fall into the latter category because they lack electronic immobilizers that prevent thieves from simply breaking in and bypassing the ignition, according to IIHS. The feature is standard equipment on nearly all vehicles of the same model years made by other OEMs.

“Our earlier studies show that vehicle theft losses plunged after immobilizers were introduced,” Moore said. “Unfortunately, Hyundai and Kia have lagged behind other automakers in making them standard equipment.”

Immobilizers were standard on 62% of models from other OEMs as far back model year 2000, and by 2015, were standard on 96% of vehicles versus 26% of Kia and Hyundai vehicle models, according to IIHS.

“If it doesn’t have an immobilizer, it does make it somewhat easier to steal,” said Darrell Russell, a former auto theft investigator who is now director of vehicles operations at the National Insurance Crime Bureau (NICB).

In 2021, that comparative ease went viral on social media. In one of the earliest-affected states, Wisconsin, the fad caused overall losses from Hyundai-Kia thefts — the amount paid on theft claims per insured vehicle year — to soar to more than 30 times the 2019 level, IIHS said.

“Hyundai Motor America is concerned about the recent rise in auto thefts of certain Hyundai model vehicles,” the OEM said in a statement to IIHS. “While all of our vehicles meet or exceed Federal Motor Vehicle Safety Standards, unfortunately, our vehicles have been targeted in a coordinated effort on social media.”

Kia also said their vehicles meet federal standards and added that “criminals are seeking vehicles solely equipped with a steel key and turn-to-start ignition system” and “the majority of Kia vehicles in the United States are equipped with a key fob and push-button-to-start system” that makes them more difficult to steal.

Russell told IIHS that the joyriding videos posted on social media and the method employed by the thieves suggest that most Hyundai and Kia vehicles are stolen only to be abandoned later.

“When you forcibly break the ignition, you’re causing so much damage that it’s not easy to re-VIN and resell the vehicle on the open market,” he said, in reference to thieves who replace VINs with fake ones or substitutes from salvaged vehicles.

HLDI tracks “whole vehicle theft” by monitoring theft claims under comprehensive insurance that mirror the dollar value of the vehicle covered by the policy and defines the most stolen vehicles differently from the NICB and law enforcement agencies by measuring the frequency of theft by the number of claims per 1,000 insured vehicle years.

“This accounts for the fact that, all other things being equal, vehicles that are more common will be stolen more often,” IIHS said. “By that metric, late model variants of the Dodge Charger, Dodge Challenger and Infiniti Q50 have consistently had some of the highest whole vehicle theft claim frequencies for nearly a decade. But the Hyundai Accent, Kia Rio and both the two-wheel-drive and four-wheel-drive versions of the Kia Sportage all climbed into the top 20 in HLDI’s latest whole vehicle theft report.”

Based on news reports and police advisories, Hyundai and Kia thefts have continued steadily, if not accelerated, in 2022. Police in Grand Rapids, Michigan, for instance, say there were nearly four thefts or attempted thefts per day between May 1 and July 7 in that city, according to IIHS. Last year, Hyundai and Kia owners in Illinois, Iowa, Kentucky, Missouri and Wisconsin began filing class-action lawsuits against the sister companies. IIHS says immobilizers are now standard on the newest Hyundai and Kia models.

Both manufacturers are working with local police departments to make steering wheel locks available to affected owners and Hyundai says it has identified a security kit it believes will help, IIHS said.

The NICB says that professional thieves can steal any car but advises a layered approach to protect vehicles, in line with their budget and perception of risk. Along with steering-wheel, brake-pedal, brake and wheel locks, it’s possible to install fuse cutoffs and kill switches as well as aftermarket immobilizer systems.