Three of this year’s Society of Collision Repair Specialists (SCRS) IDEAS Collide sessions focused on re-thinking shop operations – and not those you might have in mind; instead, aside from repairs.

“A Pattern of Basic Assumptions”

In Peevy’s session, he made the point that shops shouldn’t continue towing the status quo just because it’s always been done by using the Aztec ritual of human sacrifice as an example. While he acknowledged it’s “an extreme case” of assumption, he said, “A lot of our assumptions are built around who we are, where we come from, and what we’ve been exposed to.” 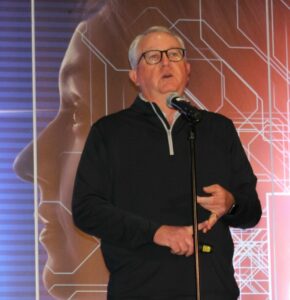 “They believed when they cut the heart out, they did it so quickly that it was still beating when they held it up, and then they slung the body down the steps of the temple. And they did that because they honestly believed that that helped the sun coming up and going across the sky and setting. …to them it was perfectly normal. In fact, it was necessary.

“…We live in a lot of different cultures and subcultures. We live in our country culture, our state’s culture, our city or community’s culture, our family cultures; and those cultures are often built on a pattern of learned assumptions. Now, let’s talk a little bit about what a culture is. A culture would be all of the ways of life that include customs, symbols, institutions, architectural food, all of these things that are so powerful to the point that the Aztecs would actually commit murder because of their culture.”

Peevy went on to say that in a business context, the pattern of basic assumptions comes during new employee orientation – when the rules, needed information, staff introductions, how customers are interacted with, how employees interact with each other, and how business overall is conducted.

“Just stop and think a little bit about the culture that you’re in. What would it take to actually question certain aspects of the culture that you’re in business-wise? And to challenge that? Now, let’s go back to the Aztec. I don’t know if it ever happened, but I wonder if anyone ever went, ‘Why don’t we take a year off of this human sacrifice thing and see what happens?’ I have a pretty good idea. You ended up a human sacrifice. Now, I’m making that assumption, but I probably feel like that probably would’ve happened. No one had the courage and until the Spaniards came, they continued it because it was passed down by generation and generation.”

The conclusion Peevy drew is that a strong business culture prioritizes learning. “They put their people first. They encourage, in fact, they insist on learning, and they insist on sharing what they know with one another. They insist that it is perfectly OK to challenge these assumptions, to challenge our way of thinking, because they mold the way we perceive things. And as a result of that — these cultures that succeed, that do really well — are willing to challenge their culture and that pattern of learned assumptions… with the speed and momentum of change. That is the key to being able to be successful in a very dynamic, healthy, vibrant culture.”

While the catchy title seems to have nothing to do with running a collision repair business, Wandrey drew the comparison to customer service and his three favorite things — Chick-fil-A’s spicy chicken sandwiches, Nike Air Jordan 1’s from Nordstrom, fresh buttery popcorn. While he pointed out they’re simple products that many other companies provide, Chick-fil-A, Nordstrom, and Caliber Collision deliver them with a special customer experience. Noting that he worked for Caliber for 20 years, Wandrey said it’s about how the experience, not the product per se.

“What these companies have done so well in selling these relatively simple products and services is… how they’ve made the experience something very special and how they make us feel about them,” he said. 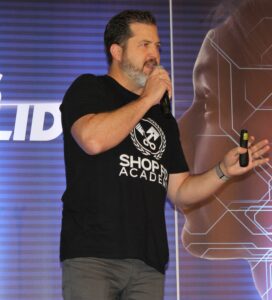 The three companies have understood and embraced value proposition — taking what is a common experience and, in the case of collision repair an “unlikable experience,” and “turned it into something that’s beloved.”

Chick-fil-A has done so through a welcoming, clean, happy environment with smiling employees and saying, “My pleasure,” to customers; 100-year-old Nordstrom by still finding the right size shoe for their customers and taking a knee to put them on customers to try out, and Caliber by cutting through nervous tension customers have when facing the vehicle repair process by offering free, fresh popcorn, Wandrey said.

“It’s definitely set these three companies apart and made them the leaders in their industries,” he said.

And specifically on the Caliber example, Wandrey said, “People don’t want to be there. They’ve had an accident, [it’s] been very disruptive to their lives, and now they’re coming to us very skeptical. One out of three motorists when they come in, they don’t trust us.” He added it’s even worse on the automotive side because two out of three motorists don’t trust mechanics.

A successful business comes down to trust by both customers and employees.

“When you build a business and a shop where people love you and trust you and are fanatical about what you do, it really doesn’t even matter what you charge anymore,” Wandrey said. “They’re gonna be happy to pay it because they want that experience every time. …You’ve got to do more. You’ve got to do better. You’ve got to come up with something cool that’s free to set yourself apart.“

He recommends are being caring and compassionate, “having a heart and a culture in your business of servant leadership,” and most importantly, following the Golden Rule — treat others as you want to be treated.

“We all want to trust and love and be passionate about the way we spend our money, whether it’s on food or on shoes, or especially in auto collision repair, but it’s up to us as the leaders in this industry to inspire our employees and our customers with what we do for free,” Wandrey said. “Use every moment of every day to give something to someone else for free. It could be your time. It could be the love you have for what you do, your passion, and especially your resources. Your resources of your experience, the knowledge you have, the wisdom you have in what you do in this business and in life.”

“Evaluating ‘Will’ and ‘Skill’ for the Perfect Hire”

Gruskos encouraged collision repair shops to look outside of their industry for potential employees. For example, sports marketing, any industry that has a Science, Technology, Engineering and Math (STEM) focus, and for life skills in general, Scouts. It’s important, too, he said to connect with high school students.

“I do look for somebody who’s really great at analytics, and you find a lot of that in fantasy football, where somebody who has nothing to do with our industry yet, they’re so smart with numbers. And as you try to show ’em what’s involved in an estimate, those numbers start to make a lot of sense. You’ll see here there’s a tremendous amount of knowledge of people in internal combustion engines that are getting extremely excited to get into electric cars, and they have no experience, but yet it excites them. If you teach them a little bit, they start to feel relevant because an employee has to feel relevant… that they’re making a difference.” 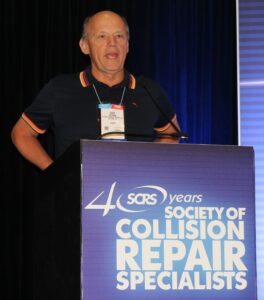 “…[O]ur industry is exciting, it’s evolving. The electric car is like the horse and buggy changing, and the amount of people that are skilled in mechanical are all sitting there. I was just in rooms for SEMA and it’s, it’s totally changing my trend of thought because they’re all scared to death.”

Gruskos added he thinks the pool of talent the collision repair industry can pull from is going to greatly increase and that many of them will be “very skilled in their learning capabilities.”

Honesty and integrity are also important for employees to have, Gruskos added, which is where Scouts come in. “They’re taught a lot of skills. They’re taught core values of honor and duty. …They’re taught to be helpful.”

Shop owners can also consider training current employees, such as CSRs or marketing folks, who they wouldn’t necessarily think of on a needed shop skill — welding, which comes at a great expense to shops, Gruskos said.

“Core values are key in a person. They don’t have to be in our industry. If you make them feel relevant, if they show math skills, science skills, which they would learn from STEM, it’s very, very easy to train them if you just have patience [and] treat them nice. Everyone in my company, except for one person, did not come from the automotive industry. They came in with a certain skill set and we trained them just simply to do things the right way.”