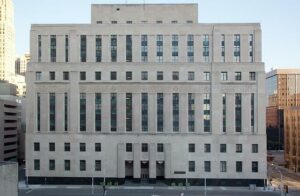 AirPro Diagnostics has filed suit against Drew Technologies, accusing the Opus IVS subsidiary of violating the terms of an information sharing agreement with AirPro and using what it learned to become a direct competitor.

The suit, AirPro Diagnostics v. Drew Technologies, was filed Friday in the U.S. District Court for the Eastern District of Michigan. Also named in the suit are Opus, Drew subsidiary AutoEngenity, and Brian Herron, president of Opus IVS, each of whom has been accused of unfair competition against AirPro.

AirPro alleges that Drew, a collision and mechanical diagnostics company, breached a mutual party agreement between the two “in numerous ways … including by using the information and technical knowledge provided by AirPro under that Agreement to wrongfully establish a competing business.”

The suit seeks unspecified monetary damages. None of the defendants has yet filed a response to the suit.

At the center of the lawsuit is a mutual party agreement between AirPro and Drew signed Feb. 13, 2017. Under the terms of the agreement, the parties agreed to exchange information with one another, including “business strategies, pricing, techniques, computer programs, methods, drawings, formulas, specifications, software, or other data of a business or technical nature[.]”

“The parties further agreed that the information disclosed pursuant to that agreement would be used only for the purpose of evaluation, discussion, and potential partnerships between Drew Technologies, on the one hand, and either AirPro or CompuFlash, on the other,” the complaint states. CompuFlash, the builder of the remote diagnostic and calibration device distributed by AirPro, had signed its own agreement with Drew.

The agreement had a one-year term, but the parties agreed not to disclose any information they had received, or to use the information to “prepare any works,” for three years after the agreement’s expiration.

“Despite these restrictions, upon information and belief, Drew Technologies took information obtained from AirPro under the Mutual Party Agreement and wrongfully exploited it for its own benefit,” the complaint alleges.

Among that information, the suit alleges, were AirPro’s business model and pricing structure, and its successful use of AutoEnginuity’s Giotto scan tool with Drew’s Cardaq J2534 interface to provide remote diagnostic services to shops for a wide range of vehicles.

“At that time, this proprietary combination of hardware and software was not generally known in the industry, and Drew Technologies did not have any ability to service collision repair shops or successfully provide remote diagnostic services,” AirPro said.

Shortly after obtaining the information and technical knowledge from AirPro, and “certainly within the three year window contemplated by the Mutual Party Agreement,” Drew enhanced its Remote Assistance Program (RAP), making it a competing service, the complaint asserts.

AutoEngeniuity and Opus are accused of damaging AirPro’s business through unfair competition.

In January 2020, AirPro said, AutoEngenuity was purchased by Drew, making it a direct competitor to AirPro. In December 2020, AutoEnginuity implemented a new end user license agreement without AirPro’s knowledge, the complaint states.

The new agreement “now specifically prohibited AirPro’s entire business model for providing remote diagnostic services, and it further placed restrictions on the manner in which the services provided using the AutoEnginuity Giotto product could be marketed,” the complaint states.

It alleges that AutoEnginuity taking advantage of “an opportunity to harm what was now a direct competitor.”

“Defendants took these actions despite the fact that AirPro had already expended millions of dollars on equipment for the specific purposes of licensing and using the Giotto product, and despite all of the assistance that AirPro had provided to AutoEnginuity over the years to refine and improve that product,” the suit charges.

On Aug. 25, 2021, Herron sent a letter to AirPro claiming that it was in violation of the new end user agreement. It was the first time that AirPro had been made aware of changes in the agreement, the suit claims.

In a Sept. 2, 2021 email, AirPro founder and CEO Lonnie Margol addressed AutoEnginuity’s complaints about the manner in which AirPro marketed the Giotto product:

“We acknowledge receipt of your letter dated August 25 and view your assertions that AirPro has marketed AE or your Giotto Platform as OEM software as factually incorrect and based on misguided allegations of others, and that your allegation that AirPro is in violation of your user license agreement is without merit.

There can be no doubt that AirPro has been a very reliable partner and consistent customer of OPUS and AE for well over five years. We have purchased several thousand tools, subscriptions and renewals totaling more than $3,000,000 and, as you are aware, have provided critical product(s) functionality feedback to OPUS and AE to assist in the continuous improvement of your products. This feedback has been in the form of software bug reports and/or coverage gaps in comparison to OEM diagnostic software products and J2534 hardware/firmware functions.

In an effort to continue the harmony our organizations have developed over the years and in view of your concerns, AirPro has chosen to update its description to: ‘AirPro utilizes a combination of licensed OEM scan-tool J2534 applications as well as what we believe to be the most comprehensive, multi-brand, aftermarket diagnostic applications directly connected to a vehicle’.

“In addition, we are willing to discuss a mutually beneficial solution with respect to any tools used for ‘self-directed and assisted scans.’

“We trust this adequately addresses the issues you raised and look forward to continuing and expanding our mutually beneficial partnership in this rapidly growing industry.”

Herron responded on Oct. 4, “largely ignoring” the content of the email and threatening to stop sending AirPro further updates to the Giotto product, AirPro contends. After a further exchange of letters between the companies, he terminated AirPro’s license to use the product on Oct. 21.

“Defendants’ wrongful termination of AirPro’s license and ability to use the Giotto product temporarily left AirPro with limited access to up-to-date aftermarket diagnostic software, and it forced AirPro to have to transition to a new diagnostic software vendor,” the suit claims.

It says the alleged conduct by the defendants “constitutes a thinly veiled attempt to harm their competitor by preventing its use of the Giotto product and otherwise inflicting financial harm on AirPro.”

The suit also accuses Herron of “fabricating” a March 11, 2020 letter to AirPro that was obtained by Ford, and was used by Ford as an exhibit in its trademark violation lawsuit against AirPro. The fabrication was done “in an attempt to help Ford in its lawsuit against AirPro, and to harm AirPro as a result,” the suit claims.

“That letter was never actually sent by Mr. Herron to AirPro, in March 2020 or at any other point in time,” the suit claims.

Ford’s lawsuit against AirPro, filed on Feb. 27, 2020 and not yet resolved, accuses AirPro of trademark violations and improperly transferring the OEM’s diagnostic software. It said AirPro’s website “asserts that its products and services are a substitute for purchasing Ford’s genuine software and hardware, and boasts that AirPro ‘can save minimally 50% over typical dealer sublet invoice costs.’”

The letter from Herron to Margol, and obtained by Ford, asks AirPro to confirm that it was not telling its customers that “a scan performed with AutoEnginuity’s Giotto is ‘an OE Scan or equivalent to an OE scan.'” It also reminds Margol that “AutoEnginuity does not have license to use the Ford ‘blue oval’ logo or mark, nor has it conveyed any license or right to use such marks to AirPro.”

However, AirPro had addressed those issues in a Sept. 18, 2019 letter to Ford. The letter described the steps it had taken, including the removal of Ford trademarks and changes in the way it handled official scan software subscriptions used for individual body shops.

Under the Right to Repair agreement between the OEMs and the aftermarket, anyone in the automotive aftermarket may subscribe to OEM software like Ford’s and run it using a compatible device using standards like SAE J-2534. This allows users to scan or program multiple brands using each of the OEMs’ official software without having to buy multiple factory scan tools or carry long-term subscriptions for rarely-seen makes.

AirPro’s lawsuit further alleges that Herron provided a letter directly to Ford on May 24, 2021 in which he “criticized the manner in which AirPro marketed its services, and in which he again reiterated the false claim that he had sent the purported March 11, 2020 letter to AirPro on that date.”

Lastly, the suit asserts that Opus has “wrongfully attempted over the past few years to entice AirPro technicians to leave AirPro and join Opus,” in spite of their awareness of the non-competition and non-disclosure agreements those technicians were subject to.

AirPro claims that this “wrongful solicitation” was a further effort by Opus to “gain information regarding the operations of AirPro,” while depriving the company of its “highly qualified technicians.” At least one former AirPro employee left to join Opus as a result of the solicitation, it claims.

Featured image: The Theodore Levin Courthouse in Detroit, Michigan, home of the U.S. District Court for the Eastern District of Michigan. (Library of Congress)