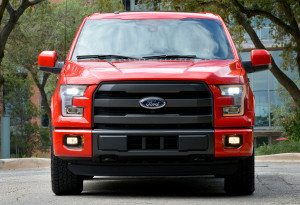 Reopening the controversy, Consumer Reports has chastized review competitor Edmunds for failing to use a Ford-certified repairer in its high-profile report of a January sledgehammer test but acknowledged the expertise needed to work with the metal.

“We saw the Edmunds report, and unfortunately, the experience with that, the dealer was incorrect,” President and CEO Mark Fields said in a Jan. 29 earnings call. (Thanks to the Street for its transcript confirming his voice.) “The amount of time to repair based on the standards that we’ve developed and also shared with the dealers, it would’ve been about half the time.”

Consumer Reports’ Jim Travers writes that replacing the panel — the cost for the panel is the same for aluminum and steel ones — would have been a simpler and quicker solution. The F-150 was designed to be modular for easier repair, Fields observed on the call.

Neither the Consumer Reports piece nor Fields addressed the higher hourly rates quoted by Edmunds’ shops to work on aluminum. That’s a plus for collision repairers seeking to recoup costly aluminum training and equipment costs — even Ford estimates that to be tens of thousands of dollars — as well as have prices reflect the higher level of expertise needed to work on what Travers called “a more finicky material.”

Fields also said the dealership, Santa Monica Ford, wasn’t certified under Ford’s aluminum program, and Travers said Edmunds was sloppy in not bringing the dealership to one certified by Ford to work on the aluminum truck. Though Ford also acknowledges noncertified shops know how to work on aluminum, according to Traves.

Controversy aside, the strength of the aluminum on the truck is impressive. It rebounds pretty impressively in the Edmunds video. Ford also has offered an amusing demonstration of the aluminum damage-resistance difference by having athletes attack F-150s.

It noted that a search on the Ford dealership locator site showed a certified shop within 17 miles from Edmunds’ office. (We tested it out with Repairer Driven News’ Wyoming, MI location and found both indie and dealership shops.)

Edmunds responded with this statement, according to Consumer Reports:

“As with any vehicle in Edmunds’ Long-Term testing fleet, our F-150 experiment was designed to simulate a service experience of any regular truck owner. Like many of these owners, we took our vehicle to the nearest Ford dealership for the repairs. The service advisor said that his facility could handle the repairs, and we trusted him to get the work done.

“While we were surprised to learn from the advisor that the repairs typically cost twice as much and typically take twice as long on the new aluminum-bodied truck as the steel-bodied truck, we were able to confirm those facts with a trusted local independent body shop. In the end, the work was performed within the time and the cost that was quoted to us, and we were satisfied with the quality of the repairs.”