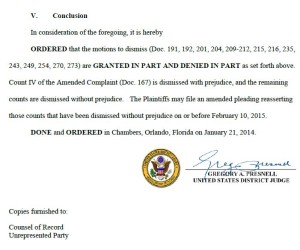 Tuesday is the deadline for multiple Florida auto body shops to file a new complaint against insurers in a case alleging steering and price-fixing by auto insurers, and another deadline is just 10 days out in several other states’ cases.

Florida U.S. District Judge Gregory Presnell allowed shops to redo six out of their seven allegations in A&E Auto Body et al. v. 21st Century Centennial Insurance Company et al. after dismissing them for a variety of reasons Jan. 21. The seventh, “quasi-estoppel” — essentially, when a party tries to have their cake and eat it too — was dismissed with prejudice.

The case is one of many similar lawsuits in different states being heard together by Presnell in what is known as a multidistrict litigation (“MDL”). MDLs are done to eliminate redundant legal work and costs on parties being sued for the same reasons in different federal districts.

A few days after Presnell’s dismissals, Florida Farm Bureau took a shot at all the Florida body shops for a “frivolous and fraudulent lawsuit” against it, arguing that since it didn’t have a direct repair program, the complaint didn’t apply. It attacks the lumping of the insurer in with its competitors on this point despite being informed of it.

However, an attorney for the shops said she’d already objected through a letter the insurer hadn’t yet received, according to a supplement to the motion.

“Ms. Fry would not email the letter to undersigned counsel but made it clear that she did not agree with the … motion and that she believed undersigned counsel had acted in ‘bad faith’ and had failed to confer as required by the local rules,” Florida Farm Bureau wrote.

Florida Farm Bureau didn’t directly refute the other allegations against it and the other defendants that they improperly refused to pay shops more than auto powerhouse State Farm and colluded on this point. It does note the lack of itemized allegations and supporting evidence specific to Florida Farm Bureau — the lawsuit makes the same allegations against all the defendants — a point raised by Presnell, who wants to see that kind of thing for each of the insurers sued unless a complaint and evidence truly applies to all of them.

No other insurer — including some not identified as having DRPs — has launched such an attack in the case, possibly because they’re waiting for the amended lawsuit today. Continue to check RDN for updates.

Presnell’s ruling applied only to the Florida lawsuit, and his subsequent rulings would apply to each of the states in the MDL separately with regards to their arguments and state law. However, his ultimate decision on the federal antitrust issues in one state could have repercussions on others, an attorney said.

And still other states have their own date to watch: Feb. 20.

Insurers sued in Arizona, Alabama, California, Illinois, Kentucky, Michigan, New Jersey, Oregon, Pennsylvania, Virginia and Washington need to respond by then to the complaints from those states’ body shops.

Those cases were lumped into the MDL and will be heard by Presnell, who required them to also state how their state law differs from Florida’s.

The door is still open for the Florida shops to sue the shops for boycott and price-fixing in violation of the Sherman Antitrust Act, conversion, “quantum meruit,” “tortious interference with business relations” (basically, interference), and unjust enrichment. Find out more about the unsuccessful earlier arguments and ways they could be modified for the deadline in our earlier coverage.

In January, plaintiff’s liasion counsel Allison Fry of Jackson, Miss.-based Eaves Law Firm said the firm had been prepared for Presnell’s and the case was far from over.

“It results in a delay, but it is certainly by no means fatal,” Fry, whose firm is lead counsel for the Florida case as well as several other states’ actions, said then. She expressed confidence Eaves would be ready with new arguments to satisfy the court by Feb. 10.