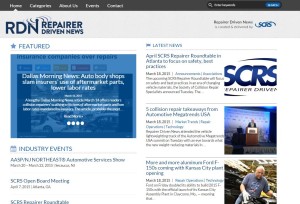 We’ve passed the two-month mark since Repairer Driven News’s official launch, and we thought we’d present a mix of highlights for our newer readers.

Find out about candidates, rules for the 2015-16 SCRS board election: Nominations have closed for the election to the 2015-16 Society of Collision Repair Specialists Board of Directors, and SCRS members should take note of the candidates and the election rules and deadlines.

Examining who bought in on PartsTrader’s $30M stock sale: PartsTrader announced Tuesday that it had raised $30 million from a new private stock sale, and we’d thought we’d take a look at who’s buying into the controversial business.

How auto body shops can keep workers — and vehicles — safe from aluminum dust: Aluminum dust gained more attention recently with Automotive News’ reposting of June 2014 coverage of the substance’s flammability that also took a look at the debate on preventing dust corrosion. Let’s talk about the two concerns (and a more general one) so you know why you’re spending the money on either barrier, Wet Mix gear, and the dedicated aluminum tools Ford requires to make its list.

Consumer Reports criticizes Edmunds for F-150 test, notes aluminum requires more skill: Reopening the controversy, Consumer Reports has chastized review competitor Edmunds for failing to use a Ford-certified repairer in its high-profile report of a January sledgehammer test but acknowledged the expertise needed to work with the metal.

And for those of you who are new, make sure to get our app and follow us on social media. (Find out how here.)